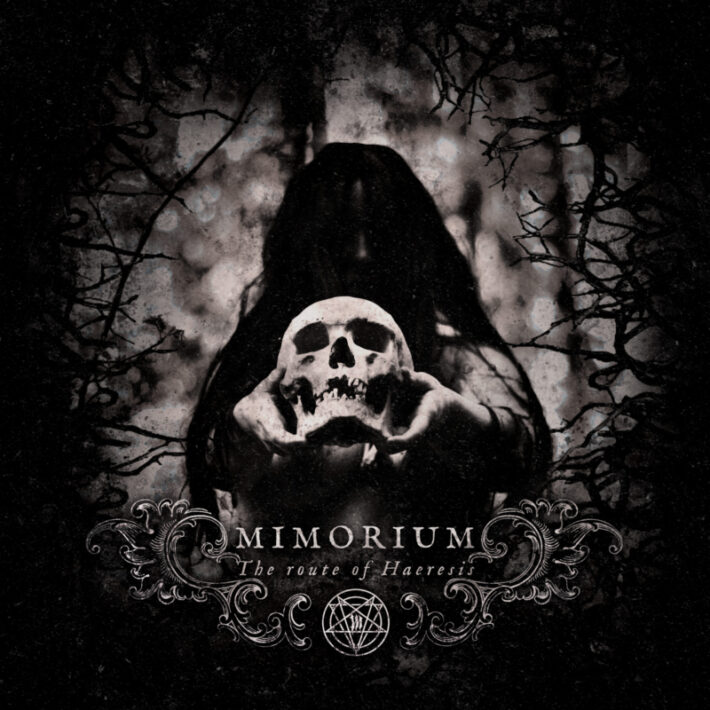 Mimorium, not to be confused with Karl Willetts’ death metal band Memoriam, are a Finnish black metal group formed in 2016. They hail from a black metal scene famous for its depravity and rampant support for extremist groups. I won’t name names, as you surely know the infamous culprits, but it’s unavoidable when talking about black metal in Finland. They have a Nazi problem. As far as I know, Mimorium are clean, but if there’s something I don’t know about, or something comes out after I write this review, I claim ignorance. As a rule, I have absolutely no sympathy for scum who use music as a platform for bigotry.

With that unfortunate disclaimer out of the way, I first met Mimorium in 2020 with their album Blood of Qayin. I found it passable, a decent record of melodic black metal in the same vein as Sweden’s Necrophobic. Their newest LP The Route of Haeresis sees Mimorium cutting back on some of the melody in their sound, while also improving on many of the shortcomings of their prior release.

The album kicks off hard, with aggressive tremolo-picked riffs leading the way throughout this record. Opener “Invocation of the Nameless One” has a menacing tone, and the wall of sound coming from the drums drives the energy along. Drummer “Vilthor” does an outstanding job on this record. I was especially impressed with his use of the snare drum, as well as his ability to place controlled blasts at compelling points in the songs. The brilliant Henri Sorvali of Finntroll and Moonsorrow mixed and mastered this thing, and it sounds killer. The drum sound on Blood of Qayin was one of its problems, but here it is prominent and sounds great.

This record has Mimorium leaning more into straight-forward black metal than on Blood of Qayin, as nearly every track relies more heavily on aggression and menace than melodic writing. “Liberate the Transcendent Essence” features lightning-fast riffs with some of the most angular writing on the album. They aren’t going for a dissonant sound, rather for menacing-sounding intervals in the tremolo-picked riffs. “Her Palace in Shade” is another highlight, with some of my favorite riffs on the album, and a hard-hitting chorus reminiscent of Dark Fortress. Closing track “Circle of Serpents” throws more melody into the mix without sacrificing energy, and it works great. I would’ve liked more along those lines on the rest of the album, but what’s present is certainly good.

The Route of Haeresis comes together as a solid, quality piece of well-produced black metal that still manages to create a menacing atmosphere. It’s well-written, aggressive, and sounds great. Mimorium are still no Necrophobic, but with this record, they make more of a distinct name for themselves. If you’re one of those losers who can’t stand when a black metal band knows how to produce their albums, you’ll hate this by default. For the rest of us, enjoy this record, as it’s one of the better black metal records I’ve heard this year.