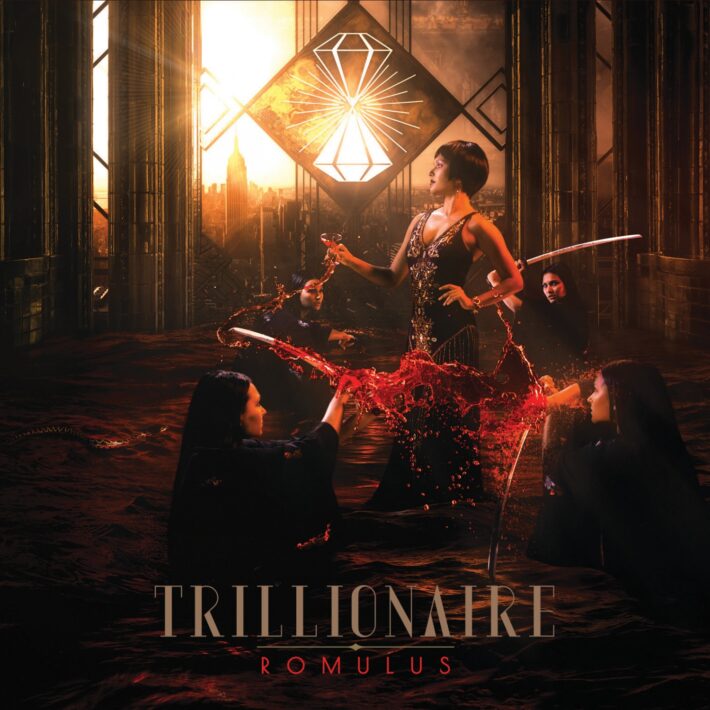 Trillionaire sounds nothing like any of the bands listed in the “For Fans Of” section. This band is sort-of-pseudo-supergroup consisting of part and former members from Revocation, Inter Arma, and A Fucking Elephant. The band describe themselves as a “gleaming, infectious blend of modern rock.” This feels shockingly accurate for a promo blurb. The album flirts with prog, but never quite finds its way there. Grunge doesn’t quite fit, nor does alt rock. There is no pop punk within sight. In any case, they were honest with the descriptors. Romulus, their debut album, sparkles with clear production and some of the choruses will be with me for a long time.

The songs that hit hard on Romulus hit really, really hard. The chorus of “Dead by 25” specifically is just plain fun to listen to. The song as a whole feels tight and satisfying, and the expert playing by all of Trillionaire’s musicians keeps the music enjoyable long after the heat from the catchy chorus has chilled. If you enjoy any of these tracks on first listen, there is enough to keep coming back for a long time.

At their best, Trillionaire pulled off an amazing magic trick. They combine earworm hooks with full-sounding instrumentation and songwriting that’s simultaneously satisfying, intriguing, and ultimately complementary to the main melody. Renee Fontaine’s vocals take the spotlight whenever they are present, but they don’t sound like they are missing when Trillionaire decides to go off into an instrumental passage. The bass in particular pops out as well, and the drum fills alway seem to be exactly what was needed in the moment. At times the music is nothing special, but the floor for this album is accomplished professionalism. Unfortunately, that’s also the ceiling for half of the tracks.

Outside of the gems, Romulus sputters. The album feels like it has a lot of filler for a relatively short album. The repeated musical tics cause the mechanisms behind the magic trick to disappear. All of the exquisite playing in the world can’t make me pay any more attention to this album than I need to.

The promotional material heralds Romulus as an album with a “complex mystique.” Trillionaire manage to shift in and out of this mystique on their good songs. On their more mediocre ones, that mystique burns away. Trillionaire is a dancing silhouette behind a curtain. When they drift away from the curtain, the music turns into nothing but a shadow. When they drift too close to the curtain, they end up bumping into a table on the other side and falling down, the curtain wrapping itself around them as they collapse to the floor. By the third track, “Underwater,” the music starts sounding a little formulaic, further ruining that mystique. The songwriting tricks used to keep the first few songs excellent become retread and expected.

Even then, the musicians still sound excellent. The production still sounds great. The guitars weave both loud, energized passages and shimmering, reflective moments, and their tone sounds perfect for both. The filler tracks on Romulus still impress. Even when you know what dramatic turns are coming in the next song because they already happened in the previous six songs, you can still enjoy hearing them well done. I just wish that Trillionaire had gone out of this specific groove, or had turned Romulus into an EP. Every song on this sounds much better individually than as a part of the whole record.

Trillionaire sounds like they are capable of accomplishing so much more than this. While Romulus is a satisfying album with some brilliant individual songs, it ultimately falls short of being a great full album. Still, if you’re interested in the side projects of any of the bands listed about, or with rock that ignores the idea of subgenres while still staying firmly accessible, at least check out some of the songs. This might not be the best album I’ve reviewed recently, but I don’t regret my time with it at all. Some of those choruses will probably stick in my head long after albums that I give better scores to are forgotten.