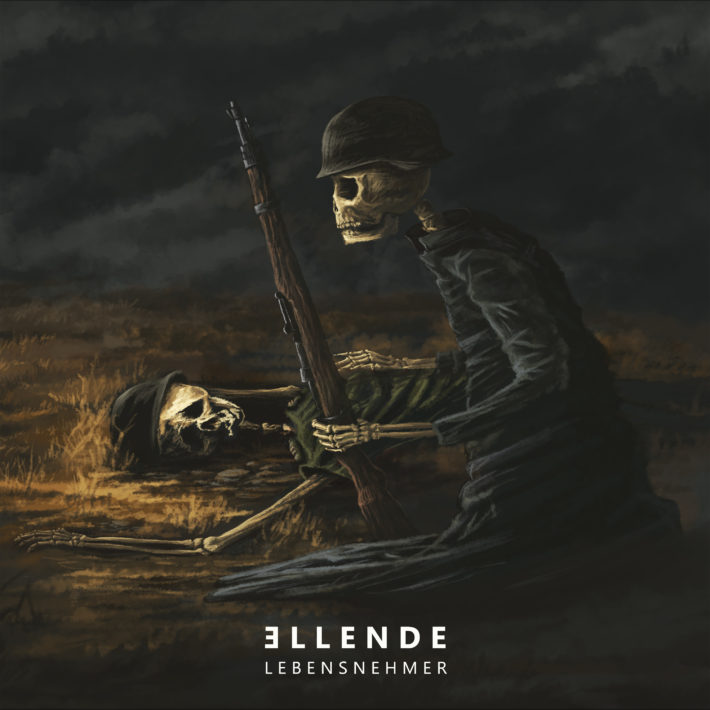 If you’re a fan of atmospheric black metal, you’re in luck. This Friday, Ellende, a one-man atmospheric black metal project from Austria, releases his third full-length album since 2013. Ellende’s previous record, Todbringer, was released three years ago and was received quite well. Now, it’s time for Lebensnehmer. The limited edition vinyl is already sold out on Bandcamp and with good reason, for the album is near perfect. It expresses anger, sorrow and melancholy in such a beautiful way that it’s almost impossible to turn off. Because Todbringer was so well received, it was a difficult album to follow up. However, Lukas, the mastermind behind the project, has definitely equalled, if not excelled himself with his new creation. The two songs that had already been released were two of the more intense black metal songs and upon listening to the record in its entirety, they turned out to fit perfectly on it, being complemented very well by the calmer songs while still making sure the album could definitely be labeled as black metal.

The record starts off with a two-minute intro consisting of strings and brass instruments playing a melancholic melody, already introducing the listener to one of the main emotions they’ll be going through while listening to the album. Little by little, a distorted guitar gets mixed into the music and the other instruments fade out until the drums and bass guitar join in, marking the start of Augenblick, the first full-blown black metal track of the record. After about three minutes, though, there’s an interlude with just two guitars that, together with the bass guitar, create a whole new atmosphere. After a short pause, the listener is awoken from the day dream that the interlude induced and Ellende comes back with all its black metal aggression. The main drum beat is pretty calm, but it’s filled up with cymbals and blast beats that make your eardrums pop.

After Die Wege, another killer black metal track with the same kind of structure as the previous song, it’s time for a calmer, more relaxing track: Ein Stück Verzweiflung. It starts off with a clean guitar strumming two chords and some guitar melodies on top of it. On this track, the drums have more of an independent role, instead of a supporting one. After a while, a distorted guitar joins in, but instead of evolving into a classic black metal song, it stays rather calm. Another more ambiental song is Liebkosung des Eiswinds. The song itself could almost be classified as dungeon synth, for it’s got all kinds of synthesizer sounds, from woodwind-like sounds to a xylophone sound, creating a mysterious and melancholic atmosphere. The track has a good structure on its own, but it also functions as a sort of ‘calm before the storm’ interlude. You see, after the icy winds from this song die away, Du wärst eine schöne Leiche suddenly breaks the silence with Lukas’s agonizing scream, accompanied by the full band coming in with all its aggression. The last two songs of the record last nearly ten minutes and have a perfect balance between full-out black metal and more melodic and atmospheric sections. There’s piano passages, strings and acoustic-sounding guitars, but also harshly distorted guitars, intense drums and, last but not least, Lukas’s anguished cries.

In general, Lebensnehmer is a tremendous atmospheric black metal record that has definitely equalled, if not exceeded its predecessor. It expresses all kinds of emotions: from anger to melancholy and sadness, it’s all on there. The structure of the record is great, perfectly alternating between the louder black metal passages and the calmer, more melodic and atmospheric sections. All in all, it makes up for an experience that you won’t forget anytime soon and you want to relive over and over again. It’s an album that was definitely worth the three-year wait!

Witchcrawl - World Without End Review
Our Survival Depends On Us - Melting the Ice in the Hearts of Men Review
Bones Of The Earth - II. Eternal Meditations Of A Deathless Crown Review
Be The Wolf - Empress Review