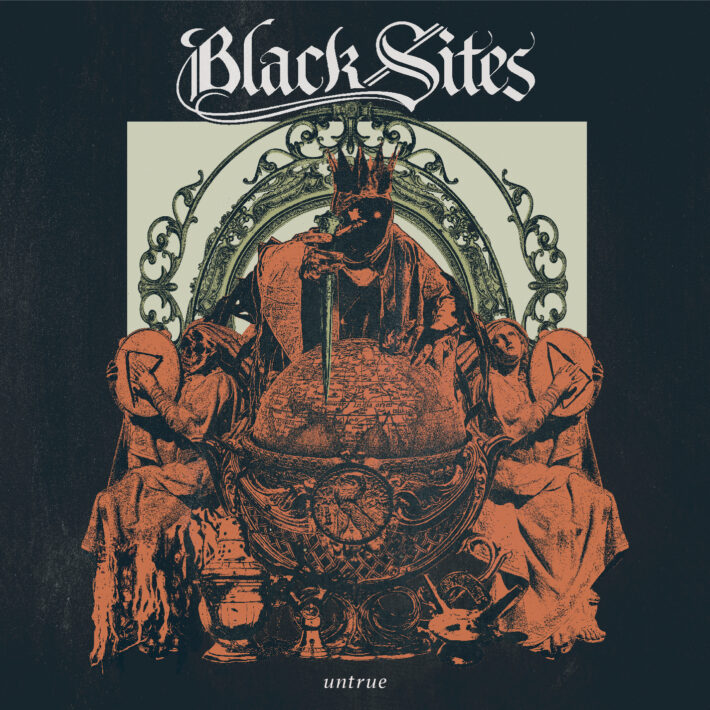 Black Sites are a trad/heavy metal band from Chicago. Untrue, their third album, has some big shoes to fill. Both In Monochrome and Exile have remained in my regular listening pile for years. Black Sites do nothing particularly special, but they do it effectively and with vigor. The band gives us clear, simple, and memorable melodies over mid-paced metal with a shine. Some songs are calmer than others, but they all sound straight out of metal’s youth.

Black Sites have shifted their sound ever so slightly on Untrue. Rather than rely entirely on big riffs and even bigger choruses, the songs forming Black Sites’ third full-length album cook slower. Make no mistake, this group still sounds out of time, like a slowed-down, more visceral Judas Priest. However, Untrue seems more exploratory than the band’s previous albums. The promo blurb indicates that the band intentionally struck out in a more progressive direction on this one. The past two records haven’t exactly had simple songwriting, but it got kicked up a notch on this one. Less focus on the big moments, more focus on getting to them.

That doesn’t mean those big moments have left. Black Sites remain some of the best at crafting big choruses. More progessive songwriting is great and all, but it’d be a shame if it came at the high cost of eliminating the band’s biggest strength. Happily I found myself rocking out to Untrue almost as much as the last two records. Black Sites remains a band that you come to first and foremost for the 1980s cheese, and I love it. Untrue straddles a marvelous line: this record feels more cohesive and fleshed out than previous releases, but all of my favorite moments from previous records remained.

Mark Sugar’s voice is perfect for Black Sites. The band wouldn’t be the same without him. He has a muscle metal tone, and puts exactly the right emotion into every track. His voice powers over the loud moments, remains full in the quiet ones, and provides an emotional throughline to and from both. Black Sites writes solid guitar lines, but the vocal melodies are the ones that have stuck with me for three albums straight now.

Despite all that, Untrue doesn’t quite hold up to its older siblings. Black Sites sound effective enough. Repetition may account for some of this: With two albums in a similar style preceding it, Untrue might not be able to do anything more than remind me of this group’s previous successes. Although Black Sites have enough talent to mostly avoid this curse, there’s still some residual build up there.

More importantly, the second half of this record drags. For a band that lives on its big moments, those big moments get less and less effective, and I simply stop paying attention. The songs still sound well-constructed. The band just loses some of its shine. While Untrue never sounds bad, I never felt a desire to get through the entire second half of the record, and only kept listening for the sake of the review a good portion of the time.

Untrue, while good, is a step down from Exile and In Monochrome. Optimistically, it shows a band in transition, leading to a more fleshed-out sound and a long and storied career. Pessimistically, the band goes downhill, and Untrue will be looked back on as a last gasp. Black Sites have the talent to be heavy metal monsters. Even if Untrue doesn’t show them at their best, I still had a positive enough experience here. I recommend this album to anyone who’s looking for good hooks, effective songwriting, and the glories of traditional heavy metal. Black Sites deserves more attention.