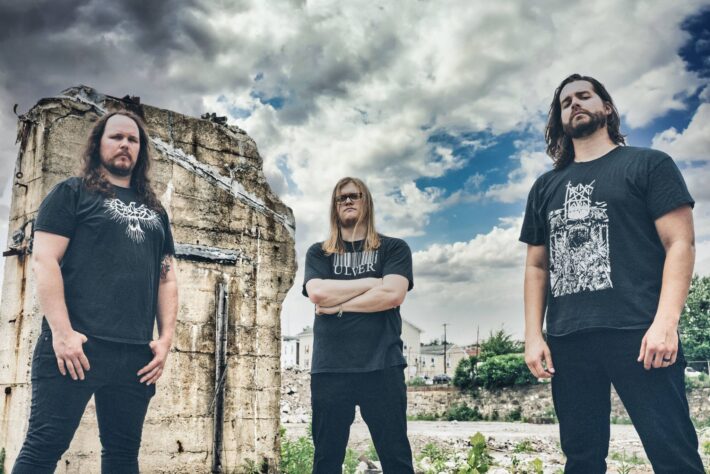 Formed during the pandemic – the perfect origin story for a death metal band – and ready to take over the world with their relentless attacks of musical brutality, Existentia is trio from Philadelphia, whose debut album was just released; on such occasion I had a chat with the guys.

Hello, this is Rick. Who am I talking to? What’s your role in the band?

Hey what’s crackin, Rick? This is Jacob, drummer/vocalist. It’s all good, thanks!

Existentia came into being out of the pandemic; why did you all decide to form a band – and a death metal one at that, and how did you find each other?

Ahhhh, the (not so) great pandemic. Ross (guitarists) and I have been talking about getting another project together for some time prior to the plague. After the entire world had to shut down and we were both out of work, we decided to make the most of our free time. We recorded the first two tracks (“Calculating Failure” and “Fulminate”) via email/internet. The others were recorded together and we had Atrium Audio put those beautiful and brutal finishing touches on them.

As for how we met, that goes way back! Long story short, seventeen-year-old Ross was playing in a melodic death metal band that didn’t have a vocalist. I was just a lone wolf in the crowd. He yelled into the mic «If anyone wants to come up on stage and sing for us, come on up!»… and here we are now! Hahaha!

As for Mike (bassist), I met him in the fall of 2020 and we became good comrades. Shortly after Travis had to leave the band due to moving to Florida, and Mike filled the void with fucking guns blazing!

Between getting the band together, writing and recording and then releasing your debut EP, in these times, what would you say has been the most challenging part so far?

That’s a tough one.
I mean trying to stay safe while playing shows and hoping the crowd is following guidelines has been super stressful. Playing a gig and then waking up the next morning with a cough or runny nose is always super alarming. Running to grab the next rapid test before the next show to ensure the fans and other bands are safe… It’s been a wild fucking ride so far!

Other than that, just sourcing funds to get the fans the tunes and gear they want and deserve. We’re all working class and have lives outside of writting/performing so you know how it goes. And lastly I’d say just keeping the spirits high during this time! Not letting canceled shows or events get the best of you. Just gotta keep moving forward.

Do you already have any plans for the future? Are you planning on touring, or do you want to get back in the studio for another EP, or an album, or even a split record?

Absolutely! This EP is just the initial pebble in the pond. Or maybe meteor into the ocean paints a better image, hahaha.

We would love to tour! We’ve had a handful of successful shows so far and have a few more lined up as of now. But being able to tour/play day in and day out is a goal for the three of us. It’s makes playing so much more exciting when you’re leaving one gig and heading to the next!

As for the studio, we are currently writing new material. We do a lot of our recording in house and then hit the studios for final touches. So expect some new brutality before the end of the year! We would love to release full length next year, so we will see how it pans out. But if things keep moving at the speed they are, I don’t see any issue in having a full length out by next winter.
As for splits; splits are rad! So if it comes up, we will definitely jump on one of those as well.

“Calculating Failure” is a pure crushing devastation in less than fifteen minutes; what is the key to making an impact in so little time and just four songs, like you did with your EP?

Shit man, I’m glad you think so! Thank you for those kind words.  We just went with our gut on this one.  Trimmed the noodles and fat, added some hooks and melodies and just kept that sweet brutality rollin’.  We’re definitely inspired by them old school death metal gods and love adding our own take on the genre.  We’re thrilled people are diggin it! Definitely inspires us to keep it going. There’s plenty more brutality where this came from!

What is it that you wish to communicate, what kind of emotions, when you write and play death metal?

In short, humans define their own meaning in life, and they try to make rational decisions despite existing in an irrational world.
We’ve all been involved in tons of social issues over the last few decades. I’ve always been a welcoming hand when people need support. Helping out at Standing Rock, fighting to keep houseless encampments safe, equality, women’s rights, indigenous rights, etc. Being able to help people when they need it most is extremely important to us, collectively and individually. It’s awesome to be in an outfit with like minded people who feel the same way. So I’d say a lot of our music comes from those areas of emotion and frustration.

To me, one of the biggest struggles of playing music that’s old school, or at least inspired by it, is the mandatory task of avoiding being repetitive or merely just a copycat. How do you guys tackle this issue?

We don’t think influence necessarily translates to jocking someone’s sound. The old school mindset (for us) means keeping percussive and rhythmic roots, and avoiding the pitfalls of fads (playing into cheap tricks for quick fixes live and pandering).

Old school is a foundation, but we want to forge our own legacy. It definitely helps that Ross and Mike come from a more old school background when it comes to Death Metal; whereas myself I’m constantly digging into the depths for the newest chaotic tunes.  So I think collectively we’re able to capture a sound that’s well balanced of old school riffs but experimenting with all the new technicalities in death metal. Like in “Back to the Future”, enjoy the classic times while shredding around on a hoverboard!

And finally, it’s been quite a year for death metal so far, with many interesting releases – Carcass’s “Torn Arteries” being one of the more recent; what are some of your favourite releases of this year?

Oh man, where to begin? This year has been decimated with so many great releases! I can’t even keep up with this year.
For starters that new Necrophagist is gold! Haha, don’t we all wish?! Side note, the band Fuck You And Die is about the closest you can get to a new Necrophagist album. Check it if you haven’t yet.

But anyways, I have like a back log of about 30-50 releases I still need to sit with, and not just death metal! I tend to want to sit with an album for at least a week or two to really digest what’s going on and what was put into it.
One that’s currently on my playlist is that Chiliasm EP: shit is weird and rips (all the tracks are 4:20 which is hilarious).

But yeah, we’ve got some heavy hitters like Cannibal Corpse, Aborted, At the Gates, Carcass, Obscura, Wolves In The Throne Room, and Archspire. Some little less known bands like Alustrium, Cognitive, Ophidian I, Fleshbore, Replicant, Sanguisugabogg, Inoculation, Trench Foot, MxGxP, World Sucks and just so much more!
I’m sure I’ll get ripped apart for missing some big ones but these are just the few that came to thought while answering this.  So yeah, give some of these a peep If you’re unfamiliar with some. And as always STAY BRUTAL!

A big thank you to Jacob and all the guys from Existentia for this interview! “Calculating Failure”, released on September 19th, is out now and it can be found on Bandcamp; support the band by following them on Facebook and Instagram.