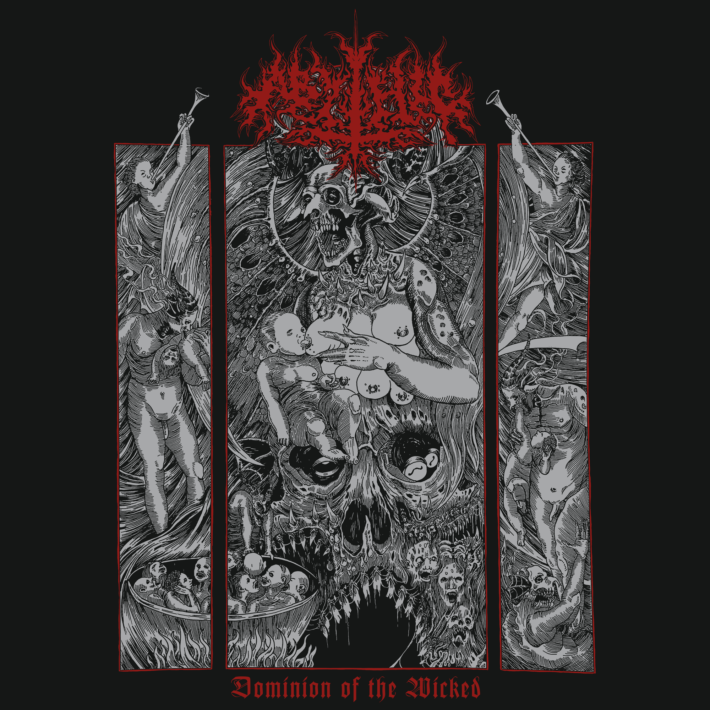 It’s been a while since I’ve enjoyed some old-school death metal.  While I may not be as familiar with it as I’d like to be, I certainly understand it’s appeal and why it has such a distinct sound.  Much like raw black metal, it seems to have a fan base of purists and elitists and the occasional pedestrian such as myself peeking in from time to time.

Dominion of The Wicked by Abythic turned out to be a nice change of pace from some of the other albums I’ve reviewed.  I found myself enjoying it more than I anticipated.  It might not have been exceptional, but it wasn’t a disappointment.

As the first few notes of “At The Threshold of Obscurity” started to play, I expected the usual trudging guitars and drums.  What I did not expect was other elements such as a choir and synth strings.  While they are used very sparingly (only at the beginning and about halfway through the track), it still caught me off guard.  No longer was I expecting an ‘average’ death metal band that regurgitated the same material and songwriting tools.  Instead, those little elements let me realize that this band might not be afraid of some experimenting.  Unfortunately, there’s not much more interesting features like that on the record (to be fair, it’s only four tracks).  “Augury of The Doomed” teeters the line between ‘death-doom’ and ‘death-metal,’ almost feeling like a faster funeral doom track.

In fact, the whole album is surrounded by a gloomy atmosphere.  This is due, in large part, to how slow it is.  A quick listen to Abythic’s previous albums include faster tempos and cacophonous blast beats more commonly associated with the genre.  In fact, in the 35-minute run time of Dominion of The Wicked, I can’t recall a single blast beat or any section of music that ventured out of a half-time feel.  This feels very intentional, like they are trying to make this album more distinct from their previous ones and not fall into the trap of recycled material.  And for that, I commend them.  Having the foresight to attempt changes such as this is always refreshing.

However, despite these positive remarks, I still found the album lacking.  The choir and synth elements I mentioned previously succeeded in building the tension and atmosphere, but it didn’t really pay off.  Throughout the entire 14 minutes of “At The Threshold of Obscurity,” I thought it was building toward something, and that any moment would come the big release of a monstrous roar or thundering double bass drums crashing down like a tsunami.  But instead of an awe-inspiring tsunami, it ended up sputtering out right before it hit the shore.  I think this happened because Abythic tried to make the whole album one long song.  Each track connects to each other, and the overall feel is consistent.  While that ambition is admirable, all it did was make the album a slog to get through.  Album-long tracks such as Winter’s Gate by Insomnium work because there are builds and releases scattered throughout the entire track, like chapters in a novel.  Unfortunately, there is not enough of that here.

That being said, Dominion of the Wicked is not the worst thing I’ve ever heard, and despite its flaws, it’s clear that this is not Abythic’s “first rodeo.”  All they can do now is continue to improve and create something more on the next record.