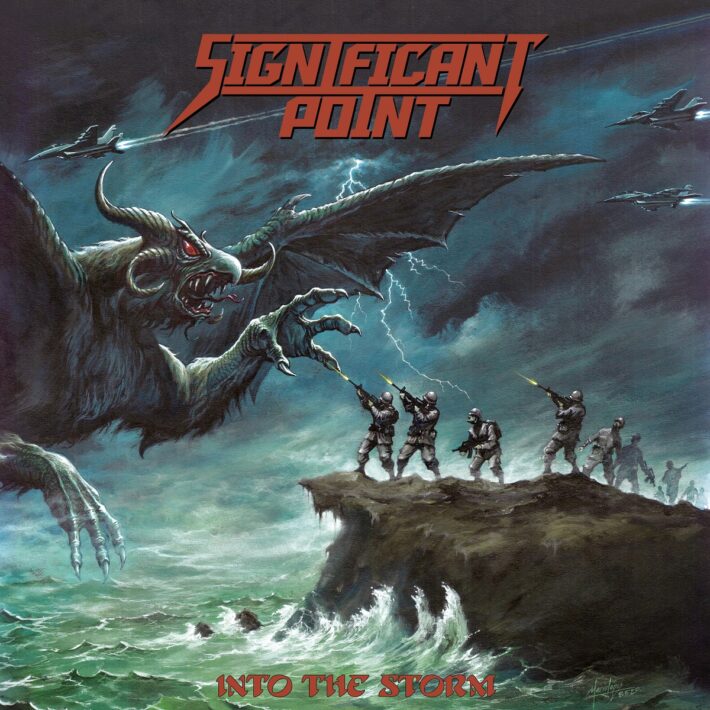 Into the Storm is the first full-length by Japanese heavy/speed metal band Significant Point, consisting of ten fast-paced songs that are guaranteed to tear through your eardrums as you listen to the album.
It’s quite an introduction, but the truth is that despite its flaws, this album hits like a foray as soon as it starts, and it makes immediately clear what it’s all about.

The band’s sound is the all-time classic blend of speed and NWOBHM influences, and while it isn’t particularly original, its execution is praiseworthy: the BPMs never drop below a certain level but there’s a well-crafted alternance between songs based mostly on speed and others who relay more on melody. This is something that makes the album more accessible because we probably couldn’t take forty minutes of unrelenting speed without ever catching our breath; instead, the way the track list is built, we have forced moments of slowing down, which can prepare us for the next attack.

The other purpose that this track list serves is to avoid excessive repetition. Not long before the twenty minutes mark we start noticing how some elements sound pretty much the same in every song, with the vocals being the most prominent one; throughout the listening session, this start-and-stop feeling helps us not to focus on such things, and there are plenty of catchy guitar riffs to do that as well, but when we look at the album as a whole, truth be told, these flaws become visible again.

Attacker is the song that kickstarts Into the Storm, and paired with Heavy Attack, they constitute a fine beginning, both for this album and well, for Significant Point’s discography; we’ve got speed, and there’s a decent number of melodies that catches our attention. They could almost be mistaken for a single long song, but luckily the chorus of the second track helps it to shine a bit more on its own; it is, however, indicative how these songs are in fact similar, saved just by some guitar licks.
The album goes on with the very Priest-esque You’ve Got The Power, a slower song which, as I said before, helps us catch a breath and it avoids the potential boredom that arise from monotony.
This sort of dialogue made up of speed changes repeats itself in the next two song, the first of which, Riders Under The Sun, doesn’t add anything particularly special to the mix except for a nice first verse. The following Night Of The Axe, on the other hand, might be my favorite off the album – yet; its combo of bridge and guitar solo is great, with a distinct classic feeling (think Grim Reaper, and Iron Maiden) and you’re guaranteed to remember it.
But it’s when we get to Into The Storm that things gets really interesting, because the title track is the only song on the album sung in the band’s native language, that is Japanese; it’s an interesting song to listen to because it’s palpable how the singer is more comfortable singing in his native language and I personally really wished that there was more of this on the album. Add some great music writing to the mix, and you’ve got the best song of Into the Storm.
The album then ends with three songs more on the faster side; again, not bad ones by any means, but definitively songs that are a bit difficult to differentiate from each other, and from the previous ones we’ve heard.

Something that I really feel the need to praise here is the mixing and balancing of the album. The guitars and the vocals have a very sharp and prominent sound, but the way the drums can clearly be heard in every song, not just as a background metronome, is probably the thing that stood out the most to me; Itormentor’s talent is noticeable, and the synergy he builds with Gou Takeuchi and Kazuki Kuwagaki’s guitars takes this album to the next level: the two (well, three) instruments support each other, exchanging the spotlights within every song.
Overall the mixing is very dynamic, but with a downside: George Itoh’s vocals, which already are perhaps the most monotonous instrument here, come off as a bit flat, and buried under the rest of the band.

Another consideration that can be made after having listened to this album, is that while we know that their true heart is that of a speed metal band, their best and most compelling stuff reveals itself when they slow down things a bit and they gift us the great riffs that can be found in here.

In the end though, it must be said that Into the Storm is fine album, whose carefully assembled track list partially hides its weaker spots and whose mixing helps it to shine bright. If we then consider that this is a debut album, then it comes off as nothing short of great and, most importantly, promising. Don’t forget about these guys, because I’m sure we’ll hear more of them in the next years, and if they’ll keep on this trajectory, they’re set for great accomplishments.