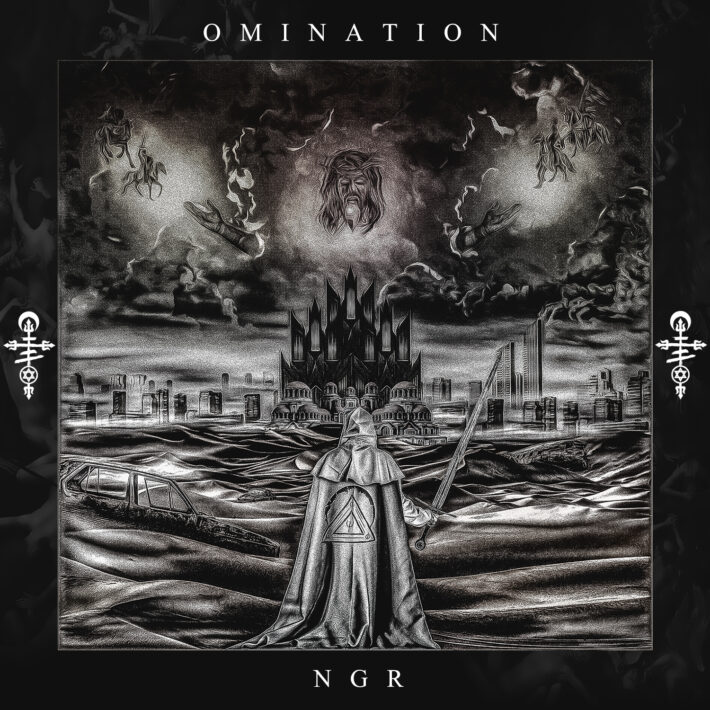 Omination are a Tunisian funeral doom band set to release their third full-length album, NGR. They call themselves “apocalyptic funeral doom,” and what that seems to mean in practice is a grieving, relatively energized version of the genre, with death metal influences playing a prominent role. Everything on here feels massive.. My first impression was that NGR sounded like funeral doom on crack, but in a good way. Future listens did nothing to change that feeling.

Contradictions melt into every aspect of this album. The very genre itself has conflicting goals. Death metal is usually driving, fast or mid-paced, pummeling, and full of anger. Doom is slower, more weighty, and full of sorrow. Obviously these are generalisations. On NGR, Omination attempts to realize both visions of metal at once. The death metal side of the music pulls both the listener and the band themselves forward, causing a rising aggression that I couldn’t help but anticipate on future listens. Meanwhile, the doom side of the music routinely plunges this album into a sonic oblivion. These opposite forces are compelling. Omination sound their best when they allow their influences to pull the listener in every direction at once, tearing them apart. I’m going to complain a lot for the rest of this review, but this core contradiction never leaves the record, and Omination’s good use of this conflict makes this album a good listening experience in spite of everything else I’m about to say.

Not all of NGR’s core dissonances improve the listening experience. As a funeral doom album, songs take a long time to progress. This is fine. It’s part of the core of what makes this album good. However, it makes some of the transitions really jarring. I’d be listening to a track, it would develop gradually but surely, and then there would be a sudden movement and everything would change in an instant. The first time this happens is around 2:30 through the opening track “Crossing the Burned Wasteland,” but it happens continuously throughout the album. These transitions aren’t bad writing, and some of them sound quite nice when removed from the context of the album. However, in context, they cut the growth of the songs off at the knees and hurt the continuity within each track. This may seem minor, but I couldn’t ignore it when listening to NGR.

On a bigger note, Omination’s production and the songwriting on the album don’t mix at all. At times the drums remind me of 80s pop songs due to the combination of the fills and the tones present. The end result of this is that I keep having neon lights flashing through my head whenever I listen to NGR. As with the transitions, the production isn’t necessarily bad. The instruments all sound quite clear, and the music has the depth needed to pull off a good funeral doom sound. This might be more of a personal association issue that won’t apply to everyone, but when I hear the drums on NGR, a certain 80s pop singer who is no stranger to love continually creeps into the back of my mind. This is not ideal for an “apocalyptic” funeral doom album.

Finally, this album is long. Really long. Almost an hour and a half long. Funeral doom albums typically take their time, but Omination punch above their weight here. My problem isn’t just that the album lasts a while, but that it needlessly does so. “Death(s), Love and Life” is an almost eight minute track that doesn’t feel like it accomplishes too much. The sort-of title track, “The New Golgotha Repvbliq,” is a twenty minute long piece that mostly works on its own but starts to feel exhausting when placed in the context of the album. And the album ends with a cover of “Nothing” by Skepticism, which sounds interesting enough but does nothing to further the album. Long albums are fine. Long funeral doom albums are expected. Omination hasn’t justified the excessive length of NGR.

With all of that said, I enjoyed NGR. Omination has made an emotional heavyweight. There is more variety here than on some funeral doom releases, and the band has written some interesting passages. Although I have some problems here, anyone interested in funeral doom should give Omination a chance.