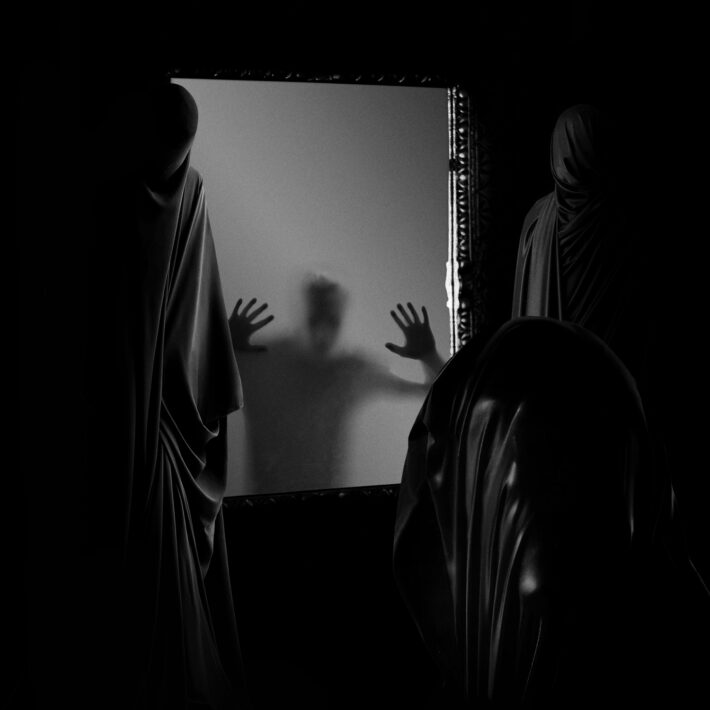 There are only two types of death metal that anyone can release: Virtuosic technical death metal releases featuring Hannes Grossman on drums and/or Christian Muezner on guitar, or dissonant metal that is in some way affiliated with Colin Marston. The Ailing Facade is a Marston-afficiated release, and as such plays around with dissonance and with odd song structures. However, an atypical approach to songwriting alone does not make for a good record.

Aeviterne are a New York-based death metal band. The Ailing Facade is their first full-length release, following a 2018 EP. The band’s guitar player is the bassist for Artificial Brain and Fawn Limbs, and if either of those names light up neurons in your skull, you have a rough idea of what The Ailing Facade offers: tight death metal with some abrupt changes and more focus on weird and disjointed moments than on melody. Beyond those common points, Aeviterne play a deeper, darker sound than any of the more famous bands attached to them, with the bass and drums playing a very prominent role.

Aeviterne are at their best when they really lay into the weirder side of their style. They sound like they’re exploring a dying, stuttering machine. The drumming is fantastic, with the constant pounding of the tom drums forming another line that’s as close to melodic as anything else the band offers.

Aeviterne succeed at layering noise and repeating notes to form a basis for their metal other than riffs. The slow down at the end of “The Gaunt Sky” summarizes the entire album quite well, as it shows the band setting up their own framework for the song and then ricocheting around in it. It also lasts for about a minute too long and could have used some more editing, but more on that later. The Ailing Facade shows a band playing around with seemingly strict rules and structure, just a very different version structure than more metal has.

Finally, the band sticks the landing. Final track “Dream In Lies” combines everything that works about their sound. Monotonous lines (in a good way) build in tension and combine with layers of one-note and repetitive noises to form massive sounds. It also lasts just a bit too long and awkwardly fades out because the band wasn’t sure how to take the wonderful mess they wrote and conclude it in a satisfying way.

So there are some struggles on The Ailing Facade. As foreshadowed, it lasts too long. At fifty minutes, the record certainly could have been more offensive, but it doesn’t hold my attention well enough to justify the run time. Some of the individual tracks putter on along for way too long as well. Aeviterne clearly know how to write warped and exciting dissonant death metal, they just weren’t able to resolve their passages in a satisfying manner. I found it difficult to get through the whole record. This was partially because of the length, but partially because it felt like I got the point well before Aeviterne gave up.

Many people will fall in love with The Ailing Facade. It hits that sweet spot of giving the audience a glimpse of the unknown while still being accessible and memorable. And I wanted to be one of those people. Aeviterne just didn’t give me enough to work with here. Still, The Ailing Facade shows a young band with promise and with enough separation from Aeviterne’s related groups to be uniquely interesting. If you’re into the weird stuff, The Ailing Facade might be for you.