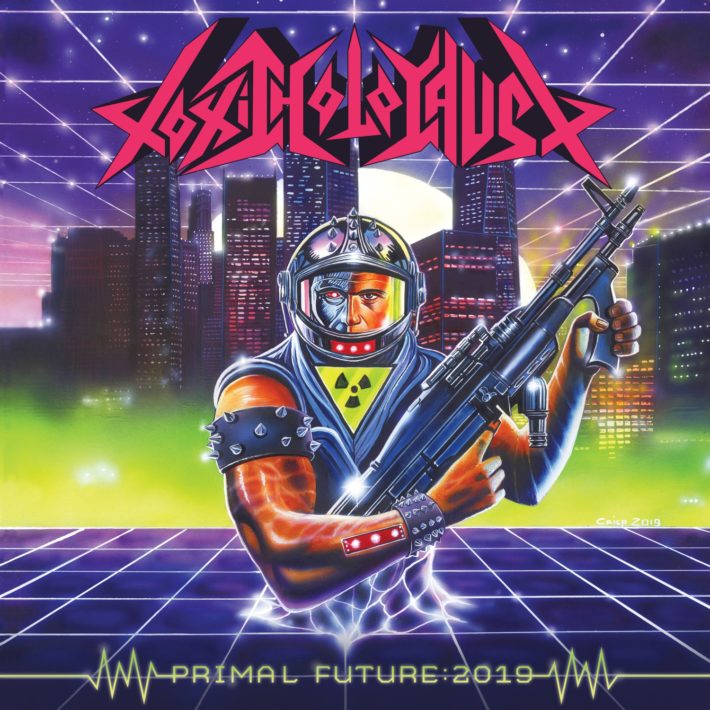 Primal Future: 2019 is Toxic Holocaust’s celebration of twenty years in the thrash business. It is a “return to roots” album, with Joel Grind playing all of the instruments and doing all of the production himself. Sometimes, these sort of albums can be tons of fun, allowing the creator to re-discover the spark that made them fall in love with music in the first place. Other times, this causes musicians to just rehash the same ideas they’ve been using forever, but with less strength and passion than they originally had. Primal Future: 2019 manages to do both.

Primal Future: 2019 is a comfortable album, and I mean that in a good way. Joel Grind obviously knows what he’s doing, and displays a confidence bordering on arrogance throughout the album, which definitely helps with create the intended atmosphere. Having this be a solo project allowed Grind to stay entirely within his own ability and confidence level, and the lack of worrying shows.

Grind is able to create aggression and energy throughout the album out of seemingly nothing. This is not necessarily complex music. Most of the riffs are very simple and brief, and chugging continues throughout most of the album. However, this just means that when there is a change, it hits hard. Suddenly syncopated choruses make the listener drop everything and pay attention to them. A change in a drum beat is a huge event that can cause an entire track to lurch sideways and go in a new direction. None of the choruses are unexpected or unique, but several, including the chorus on “New World Beyond,” sound anthemic and made for audience sing-a-longs. I’m sure they will play great on stage, and they work well in the album as well.

There are some issues here as well. Primal Future: 2019 is a comfortable album, and I mean that in a bad way. For a thrash/punk album, Grind sure plays things safe here. The promo material calls this “ambitious,” and further claims that Grind is an “unrelenting, feverish, urgent…modern metal trailblazer.” This might be the worst possible sales pitch for a “return to roots” album. Aggressive? Yes. Fun? Yes. Imaginative? I’d be suspicious, but wouldn’t object. But ambitious? Trailblazer? Are you kidding? This is the exact opposite of that. Expectations are important, and if you point the listener in the exact wrong direction you’ll end up doing nothing but creating disappointment where there didn’t need to be any.

Staying well within one’s own ability level on a solo album is a double edged sword. All of the instruments are played adequately, but nobody will be nominating the drumming or guitarwork for technical achievement of the year. Maybe that isn’t the point in a thrash/punk album. However, sometimes this gets in the way of the music and negatively stands out. This isn’t The Ramones just starting out and not knowing how to play their instruments or Bathory recording their debut album on a potato, this is a 20-year veteran doing this intentionally. I don’t want to harp on this too much because the drumming and guitars aren’t actually bad; it’s just that having other musicians record or be involved in the songwriting process may have pushed Grind out of his comfort zone or allowed him to be more creative with his songwriting and playing.

Anything can sound terrible if you focus on the negative, and there is plenty to like here. I did end up enjoying this album. Despite the somewhat questionable marketing choices and bland decision-making. Primal Future: 2019 maintains the aggressive sense of fun that the genre does best. Unfortunately, this record’s greatest strengths are also its greatest weaknesses. Yes, Grind knows that he knows what he’s doing, but that just means that he doesn’t push the envelope or try anything he’s not comfortable in. Yes, the songs are headbangers, but in a way that reminds the listener of other, better songs in the band’s past. Yes, the album can be very aggressive, but the aggression feels very paint-by-numbers. Primal Future: 2019 isn’t supposed to be anything more than fun, and it’s possible that I’m taking the music here more seriously than the artist himself did. The flaws on this album certainly fit the genre well enough. But that doesn’t change the sense of disappointment this album brings despite Grind’s success at creating a sense of fun. This is a good album, but it feels too much like a missed opportunity to be a great album.