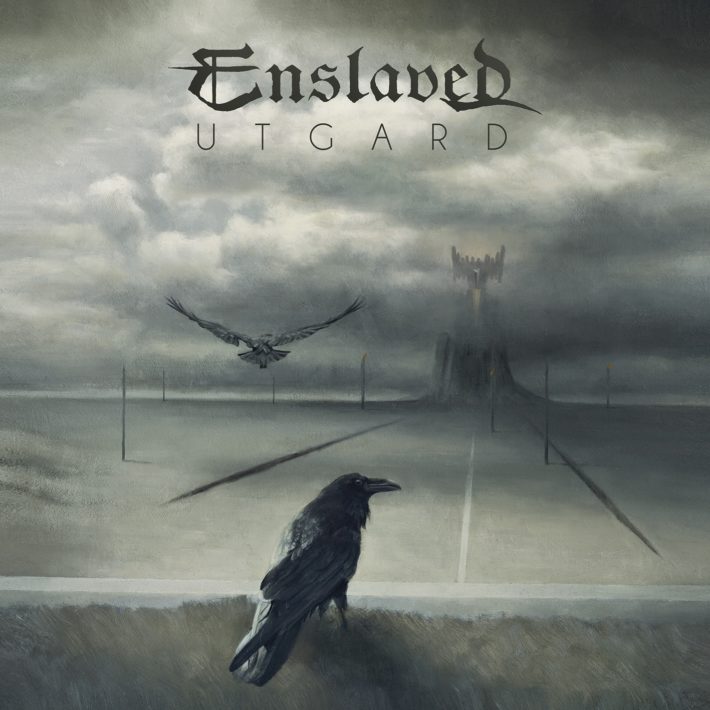 Music is an iterative art. No matter how long of a shadow you cast, you are still standing on the shoulders of giants. In some cases, such as with Enslaved, those shoulders can belong to your own past selves. You hope to improve on what you’ve done in the past, but some backslide seems inevitable. All you can do is start climbing again. Some people, including myself, feel that Enslaved’s most recent release, 2017’s E, was a bit of a misstep. It sounded fine on its own, but did not live up to the standard set by its ancestors. Enslaved have chosen to learn from their mistakes and iterate.

Enslaved are an oldhat Norwegian progressive black metal band. As Utgard is their fifteenth full-length release, they’ve changed significantly over the years, but the well-worn path that they currently travel takes a heavy influence from folk metal as well. This band has had such a large influence on the genre that they run the risk of entering “Seinfeld isn’t funny” territory, but luckily for now they still sound enticing while playing their vanilla brand of progressive black metal. They have leaned heavily into atmosphere on their recent releases, but have never forgotten the importance of a good riff. On E, the band occasionally sounded stuck in the mud, and they make a seemingly-conscious effort to change that here.

Enslaved sound revitalized on Utgard. A large part of that comes from them knowing when to continue and when to stop. On E, tracks had a tendency to meander on forever without really accomplishing anything. Enslaved vanquished that flaw between then and now. Every song says what it needs to say, and then bows out for the next track up. These songs are not excessively short, either. They end exactly when they should, in a very satisfying manner. Enslaved do not waste long, unnecessarily monolithic passages on atmosphere here. E is the past, and the present feels much brighter.

This would not matter if the songs themselves sucked. They don’t. Of course they don’t, this is Enslaved. Even at their worst this band knows how to write killer riffs and how to build a track upon itself, and this feels very distant from their worst. Every full song here breaths energy, and feels engaging from beginning to end. Some build towards emotionally powerful endings, and some seem more focused on mutating and evolving based on their main riff, but every single song felt satisfying to listen to.

Despite the shorter track lengths, Enslaved gives all of their songs room to breathe and change as needed. The best example of this comes early in the record, on track 3, “Sequence.” The song starts off with a black-and-roll riff at a middle pace, giving a defined, rhythmic pulse, but this gradually pulls itself apart and leads into a more Pink Floyd-influenced atmospheric section before returning to the more rigid beginning. Longtime listeners of Enslaved are probably not surprised by this progression, it is nothing new to the band. But the shorter, more direct songwriting present on Utgard does not damage what Enslaved have always been good at.

Nothing is perfect. The shortest track on Utgard adds nothing, as it sounds boring and bland and does not have any value beyond being an interlude. Additionally, some of the clean vocals at the emotional peaks of songs (specifically on “Homebound”) veer dangerously close to emo territory and may sound off putting to some listeners. The black-and-roll feel of some tracks may also repel some of the more purist black metal listeners, if any of them are still willing to give Enslaved at all. I would have also enjoyed some faster-paced tracks as a more stark change of pace, although what has been offered isn’t bad.

Utgard isn’t Below the Lights, but it is still a great record. Enslaved have learned from their previous stumbles and the result sounds amazing. The chance of Enslaved, as an older band, declining into mediocrity on this release loomed over its promise, but luckily any fears along those lines didn’t materialize. Give this a shot if you are at all interested in black metal, even if you weren’t a fan of E. Utgard fixes almost every complaint I had about that album, and took a bigger step forward than I could have hoped for. It’s always a great feeling to here a legend deliver on its promise.