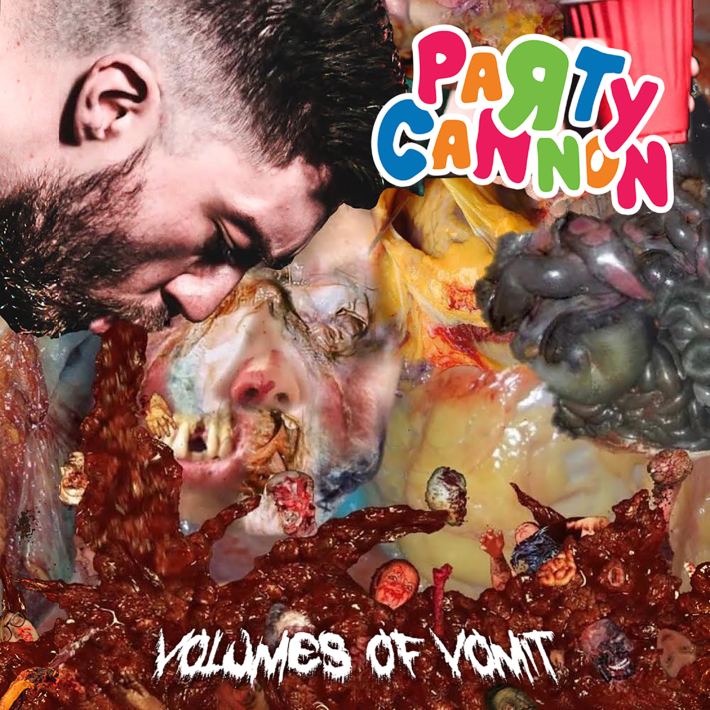 Party Cannon play supremely irreverent party slam. Their brutal death metal bursts forth from speakers, spewing the same sanitized sewage they’ve played for over a decade all over your living room carpet. “A concerted effort was put into making the songs as unpredictable and over-the-top as possible” according to the band, and this prime directive can be felt in every moment. Party Cannon has released their share of demos, splits, and such, but somehow Volumes Of Vomit marks only the band’s second full-length release. My main concern going into Volumes Of Vomit was if the music would be overtaken by gimmick. If all that remained of the group was purposefully dissonant logo and cover art and the occasional bad sample, this was going to be a rough review.

Luckily, Party Cannon force me to smile and go along with beating up a disturbingly-shaped pinata. Volumes Of Vomit just sounds too damn fun to worry about gimmicks. A wild lack of restraint flows throughout the entire record, and even when the music falters I know I only have to wait a moment before the next foot-stomping passage. The band infects the listener with their enthusiasm. They sound like they had a blast recording this, and they managed to invite the listener to their party.

The songs may be a little repetitive. The slam breakdowns all sound similar, the more aggressive riffs do as well. I personally don’t care because I’m too busy having a blast, but listeners who didn’t let themselves get swept away by Party Cannon’s passion might notice Volumes Of Vomit sinking in their estimation over time. The band has one strength, and they aggressively thrust it upon the listener. While their sound works, it’s effective. When it doesn’t, there’s nothing.

Slow, Suffocating breakdowns end up a weakness on Volumes Of Vomit. Party Cannon are at their best when they’re able to pound the crap out of their instruments, wailing, snarling, and slashing their way through an unsuspecting chord progression. When they stop everything to play the mandatory slow chugs, something special feels forgotten. While this shows the band’s impressive skills in writing lively music, it also reveals the band’s lack of restraint to be a double-edged sword. Thanks to their sampling, Party Cannon almost bleed themselves to death with their abandon.

The various samples and clips sprinkled throughout the record cross the line from irreverent to gimmicky. Did we really need Moe Szyslak and Pokemon samples? Make songs however you want, disrespect the music however you want, none of that matters. But these samples feel like they’re trying too hard to be self-aware. Party Cannon’s casual disregard for the dour and self-respecting works well enough without pulling these ridiculous clips. These random, immersion-breaking Simpsons moments at best serve as an annoying distraction and at worst as song-derailing unfunny jokes.

Volumes Of Vomit lasts forever. Okay, it lasts forty-five minutes. But for a slam album like this, close enough. I found myself bored and restless to switch records every time I listened to this thing. Individual songs sometimes also stretched on beyond the point of reason. Party Cannon is a band of excess, warts and all.

Party Cannon reside in an inherently ridiculous genre. Built upon a single riff and stretched to the point of breaking, slam has always leaned towards the absurd, and Party Cannon have capitalized on this fundamental trait, stretched it until it snapped, glued it back together, and then snapped it again. I don’t love Volumes Of Vomit, but outside of its mishaps this record gives us an enjoyable, energetic experience. I’d recommend this to anyone interested in slam or brutal death and who doesn’t necessarily want to get stuck in the more violent side of music. I doubt I’ll return to Volumes Of Vomit often, but it’s been a wild ride.