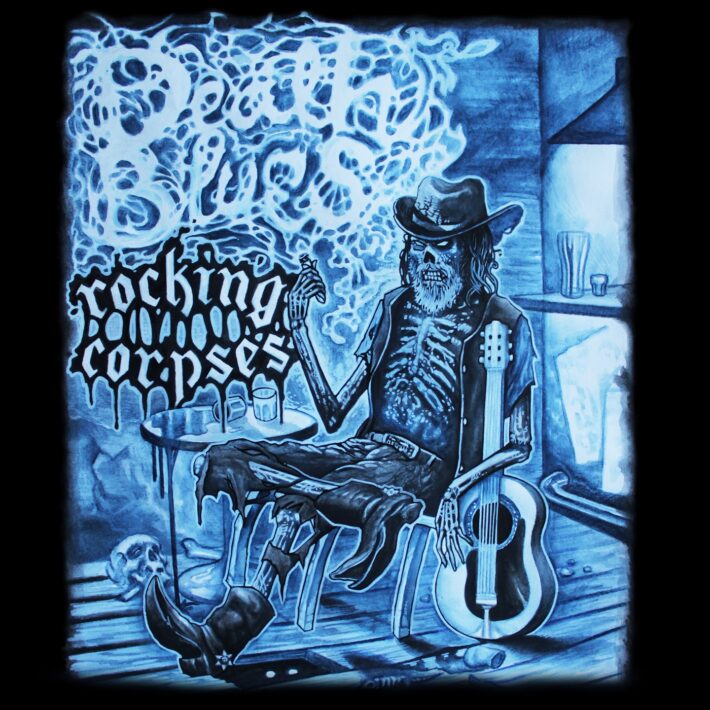 They call this death metal, which is sort of true. The dominating sound of the Finnish group Rocking Corpses consists more of blues rock, but you can hear their death metal as a secondary influence throughout. Hence the album name I guess. If you take out the growling vocals, you could convince me that Rocking Corpses was just a rambunctious blues band. Rocking Corpses are attempting to combine horror, humor, blues, and death metal in a fun mish-mash of a good time.

Most humor and humor-adjacent music falls back on terrible levels of cringe in lieu of good music, but Rocking Corpses actually create a solid foundation here. These riffs probably won’t show up near a list of the best of the year, but the band always keeps them interesting. Rocking Corpses kept their songs to straight-forward formulas. If you’re looking for mind-bending explorations of sound and face melting polyrhythms, go elsewhere. However, the group exploits these formulas to their benefit. Whenever a riff comes back after the chorus, it feels like the return of an old friend. Whenever a chorus repeats, it feels more like bonus music than repetition. The joy of simplicity is that any change becomes a big event, and Rocking Corpses use these big events to create excitement.

Death Blues biggest strength is its atmosphere. Rocking Corpses nailed the intersection of death metal, blues, old alcoholism, halloween, and comedy. It helps that the band plays everything straight-rather than yucking it up. They maintain a dead serious aura outside of some questionable vocal flourishes. As I sit listening to Death Blues, I get lost in a world covered in dust and depression, but full of vibrant characters who can shrug off the pains of the world with a smirk and a yawn. Also the characters are apparently zombies. I’d like to take a moment to single out the guitar solos as well, which are a joy throughout. These guys know how to play.

Time wastes away on Death Blues. The intro lasts for far too long, and although the constant building sounds nice enough, I ended up wishing that Rocking Corpses would simply get to the point. “Buried” also feels like it could have been half the length. Death Blues doesn’t take up too much time, but the time that it does take up feels like it’s spent in the cover art’s rocking chair. Rocking Corpses seem more concerned with having fun playing their music than pushing forward or keeping things interesting at all times. Which is fair. It looks like Rocking Corpses formed less as an ambitious endeavor and more as people who were all in different bands and just enjoyed playing together. Even though the band’s obvious good time feels contagious, the end result is songs that sound just a little too similar to each other, and which don’t ever go out of a narrow range of comfort.

The band did their best with the death metal aspects of Death Blues, but this record still feels like it would have been better as a straight blues-rock record. The death metal growls, while performed well enough, seem to always subtract from the moment. Honestly, not that much would have been lost by just cutting the death metal vocals and keeping this as a blues rock album with heavy distortion. They don’t show up that often. You can even still call it a death-metal-influenced record to keep the pun in the album’s name, the riffs are heavy enough. It feels like the band decided early on what they wanted this specific blend of sounds and kept wanting it after it stopped making sense.

I enjoyed Death Blues. I would recommend just finding the songs you like, as listening to the whole album from start to finish doesn’t really get you anything. But this is good music: well put-together, good and simple choruses and riffs, and a fully-fleshed out atmosphere. Just meet it on its terms.