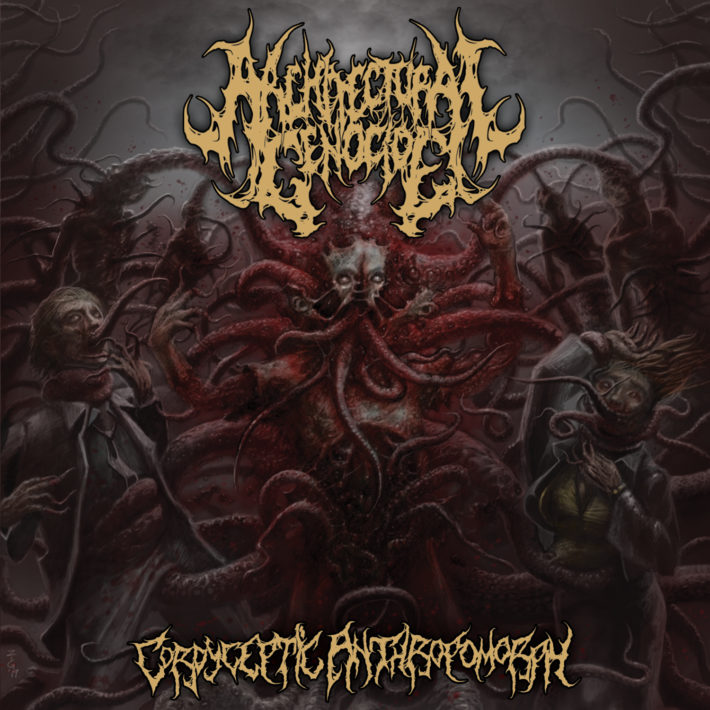 New metal bands need to have a “come to Satan” moment with regards to their terrible naming conventions. Things are getting out of hand, and Houston-based band Architectural Genocide are offenders as much as anyone else. Their band name is fine, as it hints at the sort of atrocity or violence their music seeks to evoke while also being easy to remember and made up of relatively common words, but then they named their debut album Cordyceptic Anthropomorph. While this does correctly identify to the reader the genre of their next listening endeavor, there is not even the slightest chance I will remember that name past tomorrow. I get that a lot of the easy names are taken, but if you want people to talk about your album, making your album title slightly memorable seems like step one.  OK, proselytizing on band names over. Time to move onto this brutal death debut.

Architectural Genocide play a very crisp and sanitized form of brutal death metal with some slam moments. Think if Nile met Devourment. For the most part, their sound is on the simple side of the genre, and they don’t let anything, even the riffs, get in the way of sounding as crushing as possible. All of the tracks are similar tempo, and nothing ever really relents. Cordyceptic Anthropomorph is an attempt to distill brutal death metal down to its basics while still maintaining the full sound and range of the genre. There are some slams, but they never stray too far from the backbone of the sound. There are some technical moments, but again, the brutal atmosphere comes first.

Daniel Brockway’s vocals are a mixed bag. There are some typical brutal death metal burps, and those sound fantastic. Unfortunately, he chooses to wander into slam squeals from time to time, and the contrast kills the effect. Brockway isn’t even bad at any of what he attempts. It just seems like Architectural Genocide was trying to do two things at once and failed at both, and the result is less slam-sounding and more a vague reminder Hatebeak, which is not something that anyone should ever be compared to. Everyone else does their job quite well, and every instrument rises to the technical challenges that are asked of them.

On Cordyceptic Anthropomorph, Architectural Genocide forego heavy syncopation for the most part. Almost everything important lands on the beat. Yes, I know that there are some minor off-beat hits throughout “Abolishment of Human Existence,” as well as in occasional moments elsewhere throughout the album. I don’t care. That doesn’t change the overall feeling of the album, which is one that is very much composed to fit the pulse. This syncopation decision has a downside, which will be discussed later, but the lack of syncopation helps the primary purpose of this album: brutality boiled to simplicity. With every note fusing together on the beat, the pulse of the album becomes much more efficient and the abrupt violence of the notes gets emphasized. Hits on the beat tend to get emphasized in any time of music. Classical composers sometimes fool around with time signatures simply to change the section of a passage that the player is subconsciously or consciously leaning into, therefore changing the sound of a section. Architectural Genocide are doing the opposite here, as they wrote all of their songs to drown out any attempts to put a metronome to the tracks. The effect works as it was presumably intended to.

The big downside to Architectural Genocide’s syncopation abstention is that everything feels stiff. Several factors make this worse. First, in addition to everything being very “on the beat,” the rhythms themselves are very unchanging and overly simple. The same rhythm will repeat itself for far too long, and it will not feel like it deserves any of its time. Second, this is all done at a similar tempo, both from track to track and within the songs themselves. Most tracks sound very similar to each other, and nothing really ever changes at any point throughout this record. The lack of change is almost impressive considering how often said changes are attempted. For example, there are moments where everything slows down for the seemingly-required Suffocation worship, but Architectural Genocide never quite slow down enough to make it seem like a true departure from the previous section of the song. This album’s approach to songwriting feels as safe as a straight-jacket.

These problems are in no way exclusive to Architectural Genocide, overly stiff death metal is a problem I’ve had with many bands, even some as big as Nile. I suspect that this is a significant piece of why some people hate what they refer to as “soulless technical death metal.” However, on Cordyceptic Anthropomorph (I hate that name slightly more every time I have to remember what it is), every single songwriting decision combines to make this stiffness the unavoidable center of everything. This is where the brutality was supposed to be, if you’ll remember, and as such this strikes a mortal blow to an otherwise impressive debut.

Cordyceptic Anthropomorph is an album with a lot of room for growth, from growth in songwriting complexity to growth in the band’s naming facility. For a debut, it is a promising effort that fans of brutal death metal will want to check out. It feels like Architectural Genocide could make a great record with some more time, and I hope they get there. For now, the flaws on Cordyceptic Anthropomorph are too close to the forefront of the band’s sound to avoid.