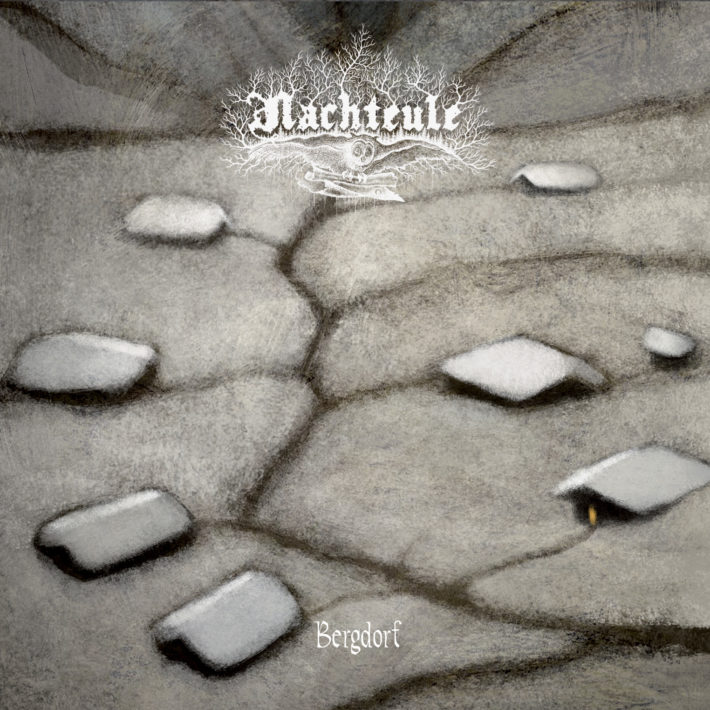 During the dark and short days before Christmas, there’s nothing better than listening to some bleak, cold black metal to set the mood. It’s the perfect soundtrack for a stroll through the cold. Luckily, just before the holidays, Nachteule has released its second full-length album in two mere years, giving every metal head the perfect Christmas present. The record, named Bergdorf, reflects the feel of this time of the year really well, expressing both the beauty as well as the cold and harshness of winter, alternating between atmospheric music and classic black metal. The general sound of the album is really similar to the original Norwegian black metal, but it’s got more melodic and atmospheric aspects, making it an interesting record to listen to.

The album starts off with L’Aube, an almost inaudible intro on acoustic guitar, painting the tranquility of an isolated Bergdorf (which is German for ‘mountain village’). Imagine the early morning sun illuminating the snow-covered pine trees: just over a minute into the album and the picture is already complete. However, the relative silence of the intro contrasts greatly with the sudden harshness of Autour du Foyer Rouge. Some of the guitar passages have such an abstract sound that they almost lose the quality of what makes them a guitar, making it difficult at times to differentiate between the guitar riffs and the more shoegazing-like melodies. Even though they don’t change a lot throughout the record, the vocals seem to express the pain and loneliness of the music, complementing the album perfectly. Towards the end of the song, the harsh black metal turns into an acoustic guitar melody with some atmospheric sounds in the background, again expressing the beauty of what could represent the snowy landscape.

Les Yeux De La Forêt, the fourth song on Bergdorf, starts off with a beautiful atmospheric passage where an acoustic guitar is accompanied by some birds singing in the background and an occasional breaking tree branch. After about two minutes, though, the beautiful melody gets cut off by the raw black metal that dominates the album, reminding the listener of the cold isolation of winter. At about halfway through the song, there’s another more atmospheric passage, where some strings create the background on top of which a flute plays a melody. It sounds a bit awkward, but it does add a folky forest-like touch to the music. Another thing that catches the eye (or ear, I should say) in this passage is the drums. It’s not until the relatively soft flute passage when the intensity of the drums really comes forward. Along with the raging guitars it might not stand out too much, but they are actually really fast, intense and diverse, making for another plus for the album. At the end of the final song, another solid black metal track, the album ends with an atmospheric outro, leaving the listener caught in a dream world of snow and cold.

In conclusion, Bergdorf is a good album, combining classic black metal with more atmospheric music and really expressing both the beauty as well as the isolation of a mountain village in winter. On the record, Noctis, the mastermind behind Nachteule, proves that he’s skilled in creating both beautiful, acoustic music as well as raw black metal, making it an interesting and diverse album to listen to. So if you’ve got nothing to do this Christmas -or if you want brighten up your family dinner with some cold black metal- I recommend putting on Nachteule’s Bergdorf!