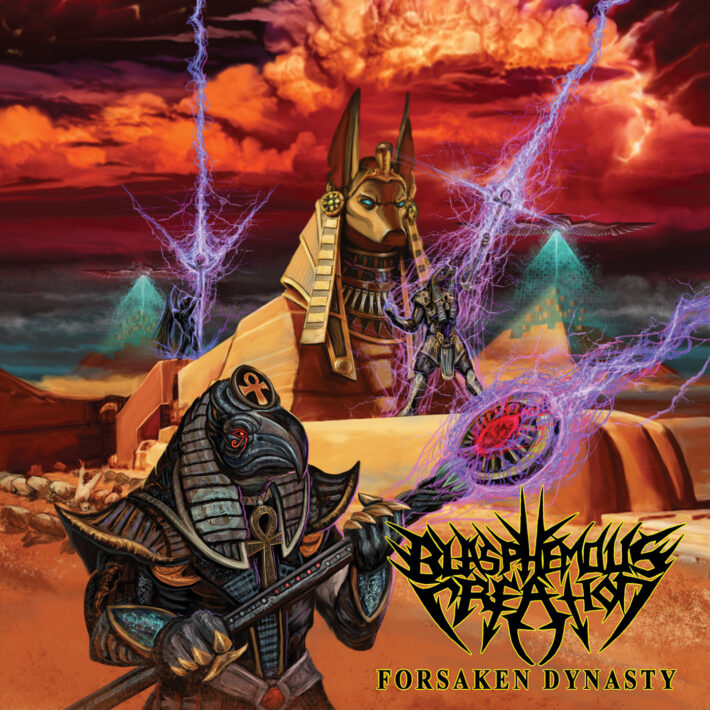 Blasphemous Creation play a style of blackened thrash that I desperately need more of. This band charges forward with the unmistakable recklessness of early Skeletonwitch or Destroyer 666. Forsaken Dynasty is the group’s fourth full-length release, and it apparently concludes an “epic ancient alien trilogy.” The record was originally released independently in 2018, and Horror Pain Gore Death Records is gifting us with this rerelease.

Some bands try to put their best foot forward by starting their album with a lead single. Some bands try to put their best foot forward by creating an atmospheric interlude, slowly easing the listener into the world that the band has created. On Forsaken Dynasty, Blasphemous Creation put forth a foot that smells downright gangrenous. They start off with an intro track who’s probable purpose is to give the listener backstory and an eerie sense of a foreign world, but which ends up sounding like the opening session of a tabletop role playing game that’s about to take a disastrous turn. This intro would have been bad if it lasted thirty seconds. Instead, it just keeps going on and on, and by the time the actual songs start I feel incredulous.

The songs don’t help. There are some rough moments here, and they start almost immediately. The vocals aren’t always terrible, but they start off grating and eventually sound tolerable. The guitar solos, similarly, sometimes cause pain and sometimes sound fine at best. The riffs, which show signs of life throughout the album, could have used some more work and occasionally trip over themselves.

Structurally, Forsaken Dynasty fares just as poorly. Most tracks have at least one transition that’s jarring and takes me out of the music. A lot of these failures could have been better in a different setting. The riffs could have sounded raw and dirty instead of distracting. The songwriting could have been daring, instead of cobbled together. I don’t think Blasphemous Creation would have put together a masterpiece in any universe, but Forsaken Dynasty comes close to a higher plane than where it ended up landing. If I had been able to immerse myself in the energy that this band exudes, a lot of these faults would be forgotten in the tidal waves. As it is, Forsaken Dynasty exists as a collection of rough passages, moments of disbelief, and occasional downright mistakes, and what does that get you?

It gets you lots of fun. Turns out that none of what I’ve written so far can eclipse the unbridled enthusiasm of Blasphemous Creation. I’ve been very rough on this band so far, and I’m going to stick with that at the end of this review, but despite all of that Forsaken Dynasty was an absolute blast. That’s the thing about disastrous dungeons and dragons campaigns: They still can tell great stories, even if it’s not the story that the creator meant to tell.

And that’s the ultimate rub of this record. Despite all of my complaints, I enjoyed the hell out of it. And that’s what this experience is all about in the end. This wasn’t just the superficial similarities to Skeletonwitch. There’s something endearing about a band putting forth everything they can. Even though the first foot they put forward may have had some alarming issues, Blasphemous Creation still gave an enthralling dance.

I can’t recommend Forsaken Dynasty highly. If you’re bummed about your favorite blackened thrash band not releasing music in several years, changing musical directions, or doing dumb nazi things, then Blasphemous Creation could be for you. If you want to hear a band go all out, here’s a group that does. If you’re looking for finely crafted tunes, there are virtually infinite other bands in line.