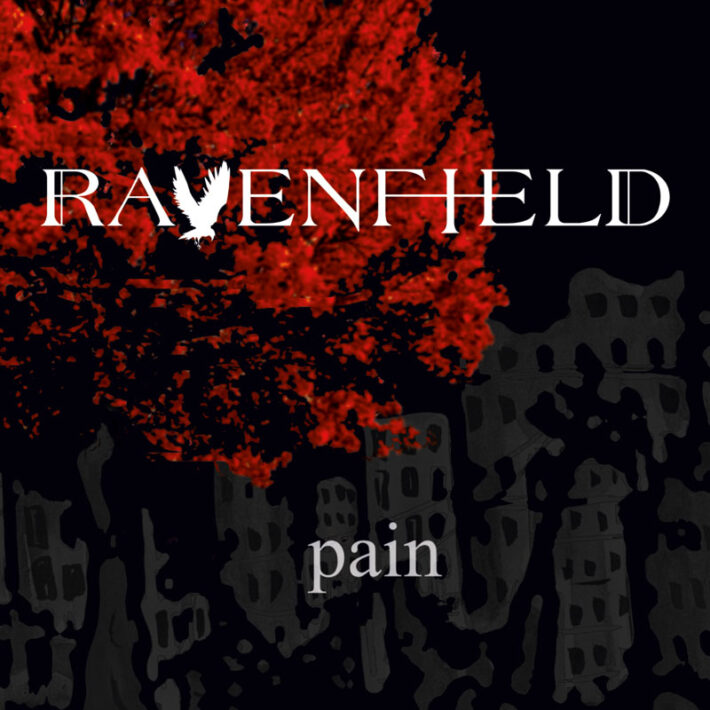 In these troubled times, many artists have expressed the deepest turmoil of their souls through music. Those musicians who succeed in crafting a soundtrack worthy of the uncertain days ahead deserve our unmitigated praise—for music is inspiration in a world that is often hopeless. Enter Ravenfield, a German band that has captured the soul of melancholy with their sophomore album Pain. Ravenfield performs a brand of dark rock in the vein of Icon-era Paradise Lost with a smattering of Type O Negative influence. Mournful dirges and pounding drums are carefully sculpted to display the bitter anguish of this world. Immerse yourself in shadowy undertones as you take a step forward into the journey that is Pain.

The opening notes of “Faith to Hate” are tender morsels to the ear, mere shadows of thick guitar distortion that swell into a pulsing anthem. The lyrics evoke a city on fire as the protagonist hides from encroaching flames. Like a fire, the riffs crackle with contagious energy. “Obsession” dials back the pace to tackle the topic of depression. Polo’s mournful voice, framed by the churning riffs of Marco’s guitar, guides the listener on an introspective journey. The next track could be a B-side from Paradise Lost’s album One Second. “Killer” is the heart of Pain, pumping the blood lust through your veins in a furious assault.

“Circles” is aptly named, blasting syncopated riffs in a repeated pattern. The groove is infectious, worming its way into your consciousness like sugar wearing down the enamel on your teeth. But “Circles” is more than fluff—it’s a whirling dervish of incipient delight. The record slips for a moment with the song “Monster.” Thankfully, it’s just a grainy blip like you see on an old VHS tape—fast forward and the band is back on track. “The Pain” is a ballad that evokes a rainy funeral. Ravenfield borrows the talents of guest vocalist Michelle Darkness (End of Green, Bury Me Deep) to help harness the sounds of blissful despair. Just imagine you are standing at the edge of the ocean as the song ebbs and flows like the tide, slowly building to a crescendo and then backing off as the foamy waves trickle past your bare feet.

Pain enters the final stretch with four additional slabs of dark rock. “Autumn” is a eulogy for the broken soul; memories of falling leaves and winter days form a backdrop to death. “Downfall” is buried under the splendor of “The Pain” and “Autumn.” It’s not that “Downfall” is a disappointment, exactly—it’s just that in terms of soulful ballads, the previous two efforts are superior. “Fast and Curious” is a brief offering of gothic rock. Ravenfield is firing on all cylinders here: churning guitars and variations in vocal styles launch this one into the stratosphere. The band finishes with the heartfelt song “Chains.” Uli settles into a thumping bass groove as the percussion rolls in like wispy fog. Atmospheric guitars enfold the listener in a sleepy embrace as Ravenfield leaves us with one final vision of a world drowned in suffering.

Ravenfield offers up ten tracks of expertly crafted dark rock on their sophomore album. Pain is a cathartic journey that haunts the listener even as the final notes of despair fade into silence. As the lyrics to the finale “Chains” evokes, each subsequent listen cuts a little deeper. If you’re looking to momentarily drown out the clamor of the world, you’ll find no better recourse than to put on your headphones and embed yourself in the journey that is Pain.