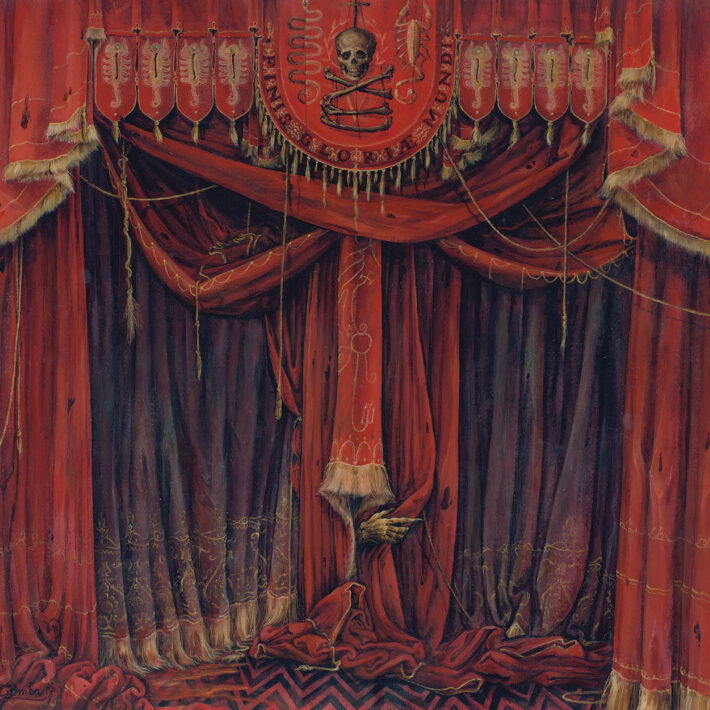 Neptunian Maximalism’s 2020 studio album Eons was a slithering, stitched together abomination of music that combined everything at once to form a free jazz, drone metal, psychedelic experience over the course of two hours. It was one of my favorite records of the year, but it unfortunately also stands out as an anomaly even in this weird band’s discography. Most of this group’s releases come from live performances, and while this helps the free jazz element of their sound, it also results in shorter, less cosmic experiences. Still, half of an Eons is still a full experience. Neptunian Maximalism now return on I Voidhanger with Finis Gloria Mundi, a recording from their 2021 tour and one of the best releases of the year.

Finis Gloria Mundi stands as the simultaneous descendent of Electric Masada and Sunn O))), combining jazz instruments and improvisation with long, droning sustenance to bounce this improvisation off of. The metal aspects of Neptunian Maximalism have mostly rusted away, leaving an eerier and more ethereal experience behind. Do note that this band released Set Chaos To The Heart Of The Moon earlier this year, which was also a live recording from a different show on this same tour and features the same songs. While the two albums contain differences due to their improvisational nature, they share the same structure and large musical moments.

This record is primarily one giant sweeping gesture. The tracks do sound distinct, but I wouldn’t recommend listening to “Neptune’s Rising,” for example, on its own and expecting a complete experience. Neptunian Maximalism performed this album as a single piece, and listening to it as such provides the best experience. Despite this, there is enough variation and progression in this music to make the time worth it. As the record flies towards and away from the listener, you hear some moments of intense building toward a monumental climax, and some moments of more laid-back exploration.

The first track, “Sustain,” is going to make some people quit the record before it begins. This album starts out very slow and very weird. Entrances like this remind me of Kayo Dot’s Hubardo, in that both albums feature a slow start that conjures skepticism and resignation on first listen, but subsequently reveals itself to be a foundational aspect of the rest of the record. This is not to say that the record starts bad and gets better, but rather that if you’re looking for a record that breaks down the door and kicks you in the teeth then Finis Gloria Mundi is not for you.

One positive about Finis Gloria Mundi’s gigantic, monolithic approach to music is that the resolution and hinge point of the album is similarly weighty. “The Conference Of Stars” is a two part, twenty minute long blast that recontextualizes all previous tracks and provides an excellent landing point for the album. Exploratory music can sometimes meander with no goal, and then slowly fade as it turns to smoke. Neptunian Maximalism chose a different route. This centerpoint makes the exeter experience coherent and provides finality to the record.

Neptunian Maximalism stated that this record is an “allegory of death.” The record does sound invested with meaning. However, I didn’t get this experience out of the record at all when listening to the record, even after listening specifically to hear what the band was going for. This doesn’t matter to me, as the band had their experience of creating the music, I had my experience of listening to the music, and there’s no need for the two to be the same. But if you’re looking to connect with the band or find a singular meaning in art, Finis Gloria Mundi may be frustrating.

Neptunian Maximalism continue to create marvelous music. While Finis Gloria Mundi isn’t as large or exploratory as Eons, this record is an engrossing experience. The band knows how to sound huge, even when all that’s playing is a saxophone over cautious drums.  If you want concise, specifically-structured music, Finis Gloria Mundi won’t be for you. I recommend this for anyone who’s looking for exploratory or progressive music.