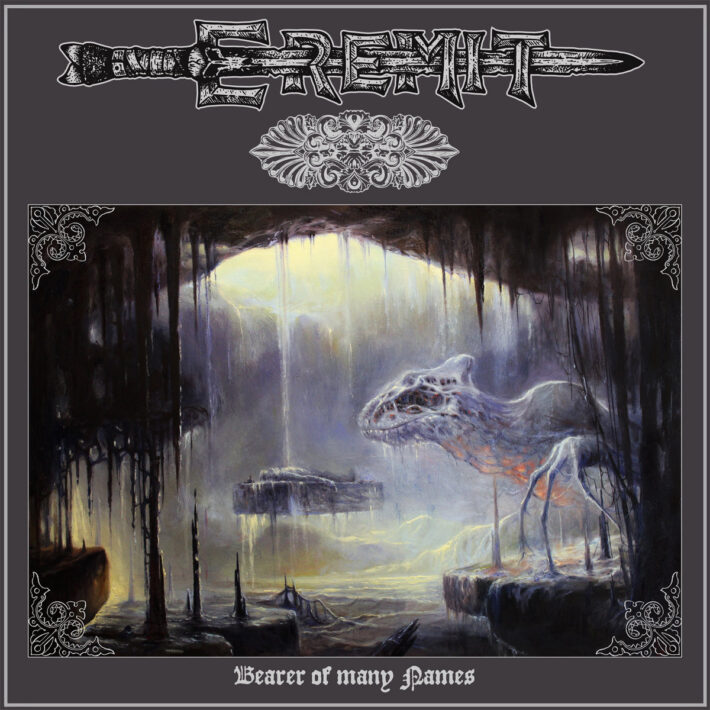 About two years ago, German sludge/doom metal band Eremit released their first full-length, called Carrier of Weight. It was an impressive debut, consisting of three songs that totalled over an hour of playing time. When I got to review it back then, I talked about a bass guitar that would be one of the reasons the music was so heavy. However, when the band read my review, they kindly pointed out that they don’t use a bass guitar, but instead, they play everything on two six-string electric guitars. To me, this only made it more impressive that Eremit succeeded in creating such a heavy sound.

After the release of their first full-length, they definitely haven’t been idle. In July, 2020, they released a two-track EP, called Desert of Ghouls, and this Friday, June 11th, it’s time for their second full-length, Bearer of Many Names. However, Eremit hasn’t just been busy writing music. Those who follow them on social media will have seen that the band’s vocalist, Mo, has written a 431 pages long pamphlet, narrating the mythology behind Eremit’s music, so if you understand German and you like digging into an extensive lore, you’d best check it out.

Bearer of Many Names continues right where Carrier of Weight left off. On the latter, the Hermit (the protagonist of Eremit’s lore) leaves the sea he lived on, and finally finds dry land. The new album continues in the cliffs that the Hermit found. As you can see below, the events of the EP are situated in between the last two tracks of the new record.

The record’s first track starts off with an atmospheric soundscape, after which a minimalistic guitar riff can be heard. At first, the long silences between each note make the music sound a bit abstract, but bit by bit, it becomes easier to follow. The drums quietly join in, building up the tension in such a way that you keep waiting for the moment everything breaks loose. And when that moment comes, the wall of sound hits you right in the face. It may seem a bit overwhelming at first, but after a while, a new drum rhythm recontextualizes the melodies, and the music becomes groovier. Mo’s vocals are expressive and diverse, yet he isn’t the only vocalist on the record. The voice of Ungô, the Bearer of Many Names is interpreted in deep, guttural grunts, by none other than Ahab’s Daniel Droste. This doesn’t just make the music more diverse, but it also enriches the conversation between the two characters in the narrative. When you think about how the track started, it’s impressive to see how it has evolved from something so minimalistic into something so grand.

The following track, Secret Powers Entrenched in an Ancient Artifact, was the first track the band ever wrote. It starts off with a distorted guitar riff, and together with the drums, another musical soundscape is constructed. This time, it represents the Hermit finding the sword he was sent out to obtain. The guitars, in combination with the drums, carry you along on the journey that Mo narrates with his expressive grunts. After an interlude, the band alternates between tranquill and loud passages, creating diversity in yet another way.

The last track, Unmapped Territories of Clans without Names, functions as a bridge between the desert lands in which the EP was set and the scenery of the third, upcoming album. The drums evoke a menacing feeling, of marching towards unknown lands. It’s good that Eremit doesn’t just focus on the story behind their music; they also dedicate a lot of time to instrumental buildups, making sure every element of the music gets its rightful place in the album as a whole. The track is yet another intriguing piece of music that slowly changes over time, taking you along on the Hermit’s journey.

In short, Bearer of Many Names is yet another impressive album in Eremit’s discography. For those who like to submerge themselves into the lore behind the music, it’s an intriguing extension of the band’s mythology, and for those who prefer to just listen to the music, it’s yet another hour of compelling sludge/doom. The trio creates a massive sound with only limited instruments, proving that special gear is not necessarily required to create impressive music. So go ahead and take a dive into the record, for it’s sure to leave a great impression.