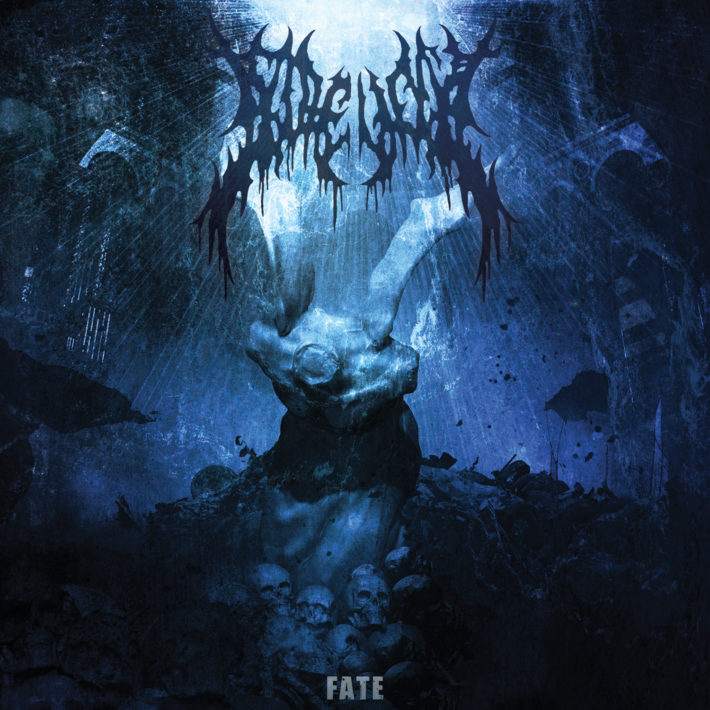 Slam is a weird sub-genre.  It slows things down to get the aggression usually associated with speed, it differentiates itself from the rest of death metal partially through use of guttural vocals despite that being a staple of the larger genre as well, and it seems to relish in being unrecognizable and incomprehensible to non-fans to such an extreme that even second wave black metal bands should be in awe. Unfortunately these traits do not guarantee good music. Within the rotten, hollowed out carcass of slam metal that seems to be experiencing some rigor mortis at the moment, there is plenty of room to screw up. Gorevent hope to stay within the fun parts of the genre without falling prey to its inherent weaknesses.

Gorevent are a Japanese slam metal band entering their 16th year. Fate will be their fifth full-length release, but it doesn’t sound like a release from a veteran band. This is raw, no-frills metal, even within the usually rough confines of slam. Fate doesn’t seem quite as heavy as other slam metal, partially due to some choices made in production, but it still provides enough of a lurch to drive away anyone not enthusiastic about the genre.

Everything on Gorevent’s Fate sounds precise. This sound is aided by production that sounds clear, although not clean. Fate has plenty of grime and distortion, but there is a clarity throughout the album that suggests that Gorevent wanted you to know exactly where every note was. They succeeded.

The songwriting helps as well. Everything is spaced out and sparse, allowing the listener to take in every note as it happens. This has two somewhat contradictory effects: First, the sparseness heightens the already brutal crunch that forms the soul of slam metal. Gorevent have taken a slow, stretched out genre and stretched it out even further, and the result is exactly what you’d expect from a genre that takes pride in being nasty to the point of non-recognition. Second, the sparseness creates a hollowed out core in their sound. Everything on Fate hits heavy, but there’s enough time for that heavy feeling to go away. A lot of slam is able to build a sound of muck and ugliness as a song goes on and the memory of riffs past pile on one another, and that’s missing here.

Another effect of the excessive echoing evidently expected from Gorevent is an extreme and exhaustive evisceration of eloquence and elongation throughout their entire essence. As you’d probably agree right now, nobody likes pointless repetition, and by restraining themselves to such a sparse sound they’ve limited their options considerably. Slam isn’t the most free-form genre to start with, given that it all spawned from a single riff, so the extra layer of restriction and repetition that Gorevent gave us puts the monotony of the album over the top.

It sounds like Gorevent tried to make up for this monotony by relying on interesting rhythms to carry their sound  in the manner of Meshuggah and their acolytes. This doesn’t work. As with my earlier problems with Fate, this isn’t uncommon in slam, it’s just worse than usual here. The riffs on Fate are uninteresting and too monotonous, and there is not enough rhythmic variety to make up for this. To be blunt, their music is too simplistic to the point that I wouldn’t be surprised if there was another instrument that was accidentally left out of the review copy. I don’t just mean this in the prog-snobby way of “not enough polyrhythms.” There just isn’t anything interesting enough to be the focus here.

All that being said, I didn’t mind listening to Fate at all. All of its problems add up to an inoffensive and painless sound, and there wasn’t anything terrible about this album. Fate was just boring at times. Gorevent have possibly crafted the world’s first easy-listening slam metal album. Can’t imagine the audience for that is too large, but if it includes you, then congratulations on finding some nice new background music.