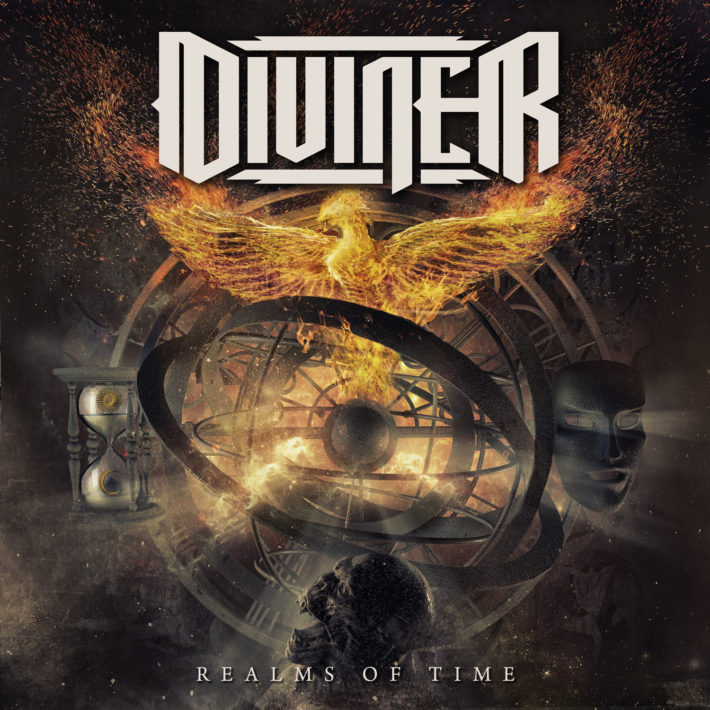 There are over 128,000 metal bands listed on the website Encylopaedia Metallum. A cursory search reveals that almost 850 new bands were added to the site in 2018 alone. While these numbers are certainly estimates, they provide an interesting picture of metal today. Chances are, it won’t take you long to find a plethora of new metal albums that you can give a spin, but it’s often difficult to find quality bands.  You can insert whatever analogy that you want – searching for a needle in a haystack, finding the diamond in the rough – but looking for quality metal music can be a daunting challenge.

Ergo, enter the metal reviewer. We are here to make the job of finding new music a little bit easier for everyone. Back in 2015, I stumbled across the Greek heavy metal band Diviner.  At that time, Diviner had just released their debut album, Fallen Empires.  I remember being impressed by the band’s uniformity and energy.  I still spin that album from time to time, and its vitalizing choruses are a welcome symbiote that feed upon the recesses of my memory.

Fast forward to 2019 and the release of Realms of Time, Diviner’s sophomore album.  Realms of Time is a heavy metal album that will also please fans of power metal with its catchy hooks and memorable choruses. Diviner’s current lineup consists of vocalist Yiannis Papanikolaou, guitarists George Maroulees and Kostas Fitos, bassist Herc Booze, and drummer Fragiskos Samoilis. While the band clearly draws on influences from timeless classics such as Judas Priest and Dio, there’s a modern sensibility to their music that contributes to the aesthetic impact of the album. Papanikolaou is a formidable vocalist, and while at first his voice might take some getting used to, his dynamic range and energy contribute to the effectiveness of the album.  Realms of Time sounds cleaner than the band’s previous effort, with top-notch mastering from Henrik Udd (Powerwolf, Hammerfall, Myrath).

Diviner ambushes the listener with “Against the Grain” to begin the record. The rhythm guitar carries this song as the drums hammer alongside. A soaring guitar solo is the pièce de résistance of this sonic buffet.  “Heaven Falls” showcases the band’s melodic side with an outstanding performance from Papanikolaou. “Set Me Free” is a battle cry for the oppressed and suffering.  For all of you Game of Thrones enthusiasts, the image of Daenerys Targaryen freeing the unfortunate wretches of Slaver’s Bay from their cruel masters keeps running through my mind as I listen to this track.

The fourth track on Realms of Time, “The Earth, the Moon, the Sun,” is the strongest exhibition by Diviner thus far.  The epic chorus describing an apocalyptic vision is unique and refreshing and the modulated guitar rhythm that underpins the soaring vocals helps this track stand out above the rest.  The dynamic contrast towards the end of the song – featuring acoustic guitar and a subdued “whoa-oh-oh” chorus – is spine-chilling.

The next four tracks on Realms of Time are standard heavy metal fare and do little to separate themselves from the pack.  There are a few competent guitar solos, and an interesting vocal exchange on “King of Masquerade,” but those highlights do little to raise the songs above mediocrity.  Background operatic vocals on “The Voice from Within,” coupled with a strong rhythm guitar, help bring the band back on track.

The final effort on Realms of Time, “Stargate,” showcases the dynamic range of singer Popanikolaou and raises questions as to why the band doesn’t use this songwriting recipe more often.  The acoustic guitar and light drumming slowly gain in volume and strength like the rising sun, casting its brilliant shadow on a slumbering world.  The chorus on this song is original and memorable, and I’ll be coming back to “Stargate” many times, as it ages like a fine wine.

Realms of Time is a solid sophomore effort by the Greek heavy metal band Diviner that ultimately suffers from a lack of consistency. Some of the songs are filled with passion, innovation, and musical talent, while others fall behind in one or more of these areas. Overall, Diviner’s straightforward musical approach makes them accessible to most fans of heavy metal and power metal. On future albums, the band could work on providing more variation in their songwriting. But until then, I’ll be content with putting such tracks as “The Earth, the Moon, the Sun” and “Stargate” on repeat.