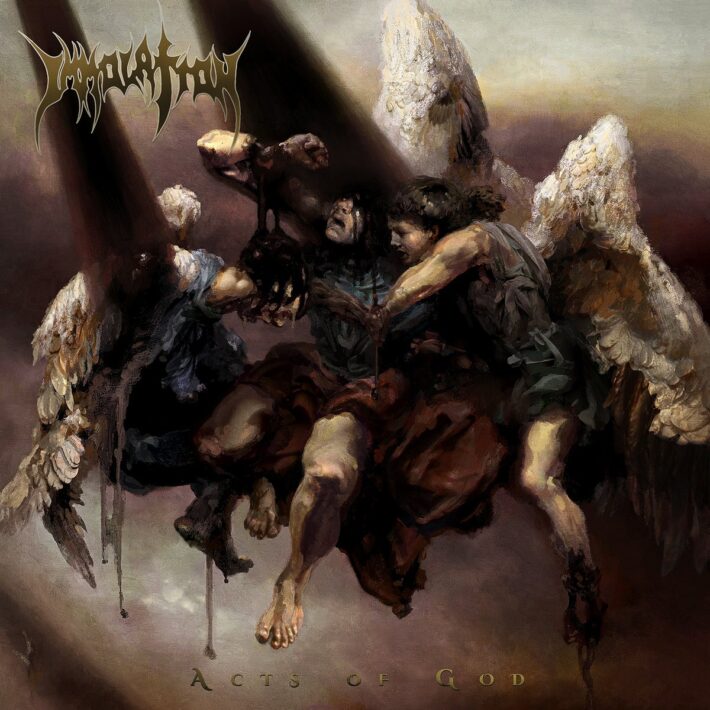 I have been waiting for this record for years. Immolation went on tour in 2019 as part of the Decibel Tour, and ended the show by saying that their new album was done as they walked off stage. I, being a moron, thought that meant that the album would be out soon. Some world events happened in the meantime, and here we are seemingly forever later. These years of pressure combined with Immolation’s immaculate and fire-cleansed track record meant that my expectations for Acts Of God were as high as they could be.

Immolation play New York death metal. Since their late 80s demos and 1991 triumph Dawn Of Possession, technical death metal has ebbed and flowed, progressive death metal and brutal death metal have done the same, slam and blackened death and death/doom and whatever other subgenre you want to through out have had their moments to shine, and through it all, Immolation have just kept going with their unaffected and unblemished style that has inspired so many other bands. Their sound has always been deceptively well-crafted riffs on top of mid-tempo tracks with deep vocals and drums that are equal parts simple blast and wildly effective small moments. Acts Of God has changed absolutely nothing.

These riffs are so damn good. Immolation have the talent of writing music that shouldn’t work and making it seem like the most natural thing in the world. Notes never sound out of place, but after you go back and listen closely you’ll notice that they had a bizarre jump in the middle of the riff that should have ruined the flow. There was one song on Atonement that had a riff consisting of half squealies. It rocked.

Even when they’re not hopping around registers, Immolation give every note excessive value. A moment halfway through “The Age Of No Light” right before the guitar solo shows this off perfectly. Everything except the guitars goes quiet. All these stringed instruments do is play a slow, simple, ascending pattern. It sounds so good, but in anyone else’s hands it would sound so boring. No other band writes generic death metal this well.

Immolation also have a heaviness to them that hasn’t been equalled. Partially their production pulls through, and partially they get out of their own way. The performances also add a lot of weight. Ross Dolan’s vocals are a deep and bestial pleasure. The drums sound a little blunt and dampened to my ears, but they fit the style perfectly and compliment the rest of the instruments so I’m certainly not complaining. Plenty of bands have dazzled with virtuosity or more aggressive songwriting. None have been more effective and efficient as Immolation.

Of course, those last few paragraphs were just as true for Atonement. And Kingdom Of Conspiracy. And Majesty And Decay. Immolation might be just a little formulaic, and it’s starting to show a little too much. There were passages on Acts Of God that I could swear I had already heard on Atonement. The similarities were so strong that this felt more like a part 2 of their last album than a full stand-alone release. I loved Atonement, so no bones here, but this does feel a little strange when listening.

Dawn Of Possession may have been innovative and new, but so much time has passed and so many bands have attempted to be Immolation that at this point their sound is a bit cookie-cutter. The cookies are damn delicious, but still. Know what you’re getting into. Immolation are not a band for experimenting or trying anything new. You’ll get your three to five minute long mid-tempo tracks and you’ll like them, damn it.

You know what, though: I do like them. A lot. Immolation are one of the best death metal establishments around, and Acts Of God continues their remarkable legacy. This album held up to every scrutiny, every pressure, and every desire for more simply by being what it is: an unpretentious, masterfully written death metal record whose only peers are the band’s back catalog. I will continue listening to this for many years.