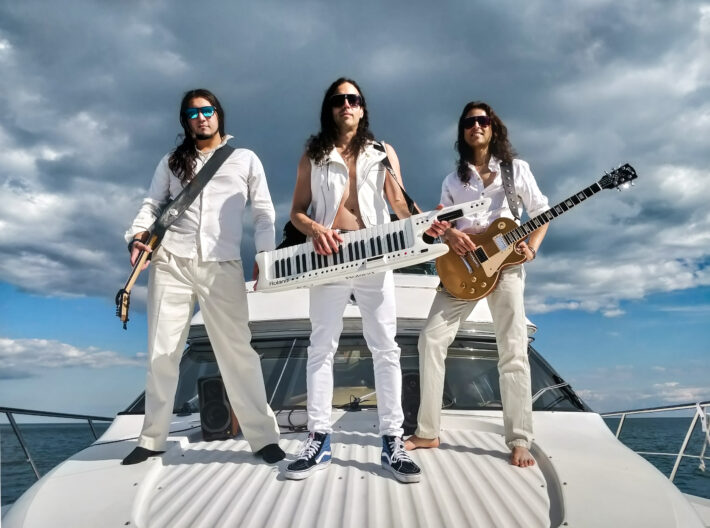 The debut album by explosive Canadian trio Thunderor will be out in just a few days. Featuring memebrs from modern heavy metal scoundrels Skull Fist and Operus, this band calls for the fans to join on a crazy ride. I had a talk with the guys to introduce Thunderor to the world.

Hi, this is Rick! Introduce yourself and your role in the band!

Hey, I’m JJ Tartaglia and I’m the singer/drummer and do keys also.

JJ, you’re basically the mastermind behind the band. What drove you to create Thunderor and why did you decide to experiment with singing and playing the keyboards?

“Mastermind”, I like that haha. But it wouldn’t be anything without also my partner in crime [former guitarist of Skull Fist and former live guitarist of Enforcer] Jonny Nesta, since we wrote all of the songs together.

It actually all started with me deciding to get my vocals into shape in order to pull off the Skull Fist back-ups. Zach [Slaughter, Skull Fist vocalist] had been harping on me for years to learn how to sing, and I’m now very glad that he pushed me to do it.
In 2019 I finally began to take it seriously. So as I worked on my singing, and also singing while drumming, the idea started to develop in my head: what better way to push my abilities than to front my own band? Plus a long-term goal of mine had always been to do songwriting, so it felt like it was time to just go for it.

I was also composing on the piano during this time, so two of the songs were actually “piano songs” which we then expanded on. The decision to add synths was actually made quite late in the writing process, I had added a synth-wave style keyboard part in the chorus of We Can Make It and it sounded so cool that we decided to add synths to the whole album!

A drummer who’s also the singer is definitely one of the many characteristics that stands out about the band. Was it hard to learn how to sing while playing the drums? Is it exhausting, physically? I’m thinking for instance to All or Nothing where there’s a demanding double kick pattern, a small drum solo too and you have to sing on top of that.

It was an incredible challenge, in the beginning, I couldn’t even imagine singing let alone doing it while playing drums. And to have to sing into a mic on top of that.

I couldn’t get the physics to make sense in my head, I thought I would just smack the mic stand with my arms constantly and the mic would hit me in the teeth and the whole setup would just come crumbling down! But over time I worked through it.

As a drummer I remembered that I have the advantage of trained independence, I’m already doing 4-way coordination so I just needed to add a fifth “limb”. Eventually, it started to feel the same as singing while strumming an acoustic guitar.
Fills were trickier if I needed to sing over them, but now I can do it all no problem. Physically you just need to keep your breathing in check and it’s fine. But yeah, you’re totally right: I think All or Nothing is the toughest since all of the parts are pretty demanding and are happening together or back to back.

You recorded the whole Fire It Up in an old-school fashion, «without any quantized drums or pitch correction», to achieve something that «gives a better human connection and allows the songs to shine through with the real attitude». How exactly did you achieve this – was it hard? – and is this something you’d like to do again in the future?

Yeah, we actually tracked everything ourselves, in our rehearsal space. It was quite the undertaking and a learning process for sure.
We had done loads of pre-production stuff ourselves before but for me this was the first time doing an entire album that would be released commercially. We bought good mics, interfaces, laptops, finally made the switch to a recording software. Before that, we would just use these ancient 8-track recorders that we had hahaha. We’re so old school. But yeah, it was time to evolve.

We just focused on getting good takes. We wanted to stay away from quantizing the drums or any pitch correction, or even too much editing. Everything was tracked bare bones, we wanted that natural, human feel to it. For the drums, it’s really just good tuning, good mics and a good performance.
I think our lack of engineering skills also worked in our favor, since we don’t know any studio tricks or fancy editing, so we did it olden days style… but we did get pro guys to do the mixing and mastering since that’s a whole other ballgame. And of course, we wanted something that would stand up to modern recordings of today.

We were recording the new Skull Fist record also at that time, so we did the mixing at the same studio (Vespa Studio in Toronto) which was done by Chris Snow, and then Harry Hess from Harem Scarem mastered it.
We’re totally happy with how it turned out, but I think for the next album I’d like to track the instruments in a proper studio with a real engineer, we can get better sounds that way. I’d be open to involving a producer as well, let’s see!

The album has very upbeat themes and sound but there are two songs, Dangerous Times and Cold Tears, which are in apparent contrast with this; the first one talks about the end of a relationship while the other is a cheerless hymn about standing strong.
Where did the inspiration for these two songs come from? How did you make them fit in with the rest of Fire It Up?

Right, so those were the two “piano songs” which I mentioned earlier; I wrote them on just keys and voice so I guess that’s why they’re quite different than the rest. I think I tend to write more dramatic and desperate on piano.

Yeah, Dangerous Times is about love, or the lack thereof. The end of a relationship is pretty accurate, I never thought of describing it that way. There is some inspiration from one of my past relationships in there. And yeah, Cold Tears for me is about standing on a mountain, overlooking some kind of fjord, and reminiscing about life, being deep in thought, the wind is cold and makes your eyes tear up, hence the name. I think once we added the other instruments they fit the album quite well. It also gives the album more depth, a bit more of a journey.

You actually rode a motorcycle biker-style and sailed on a yacht for the music videos – talk about going on an adventure! Do you have any Spinal Tap stories you can share? Also are those your bikes?

Haha yeah, it’s more fun that way! I’m a pretty avid motorcycle rider, I really enjoy doing trips to foreign places. Motorcycles are a big theme throughout the album, also because of what they represent to me – being free, chasing your dream, living wild.

So yeah, that’s my bike that I’m riding in the video! A ’97 Virago 1100. The other bikes belong to my good friends who were the stand-in riders since Jonny and Oscar [Rangel, bassist] don’t have any.
The yacht belongs to my friend Johnny Goltz, vocalist from Saves9; it’s funny, we were just chatting one day and he mentioned his yacht and I was like “You have a yacht?? I’m looking for one for my video!” haha, so that worked out nicely. A funny story during the shoot we actually lost the drone in the lake! The winds were too strong!

Thunderor has a rich schedule planned ahead show-wise, including a tour with legendary former Accept frontmant Udo. Are you excited to go this big for your debut tour?

Hell yeah, we are totally stoked about that. Although we’re only doing the Mexico tour dates with UDO it’s still gonna be killer.

We’ve always had a strong fan base there with Skull Fist, so I’m excited to perform the Thunderor stuff for those audiences. The shows got postponed until June which was a bummer but it will give us more time to prepare. I can already imagine the shows in my head, big venues, packed with passionate metalheads, massive loud sounds… it’s the way Thunderor is meant to be heard. We’ll have pyro too if they allow it.

I know there will be big expectations, and we are going to deliver and then some. But of course, we’re excited about the club shows too haha, our Europe tour with Traveler is being re-scheduled for June also so we should be announcing those new dates soon.

And speaking of tours, any hopes for a joint tour with Skull Fist in the future?

Man, that would be so great, double the fun for me! Nothing like that is planned yet but hey who knows, the future is unwritten!

Thanks a lot to JJ Tartaglia and everyone from Thunderor for this interview. The amazing Fire It Up will be out on February 25th, 2022 and you can listen to the singles on Bandcamp. Don’t forget to follow the band on Facebook and Instagram!