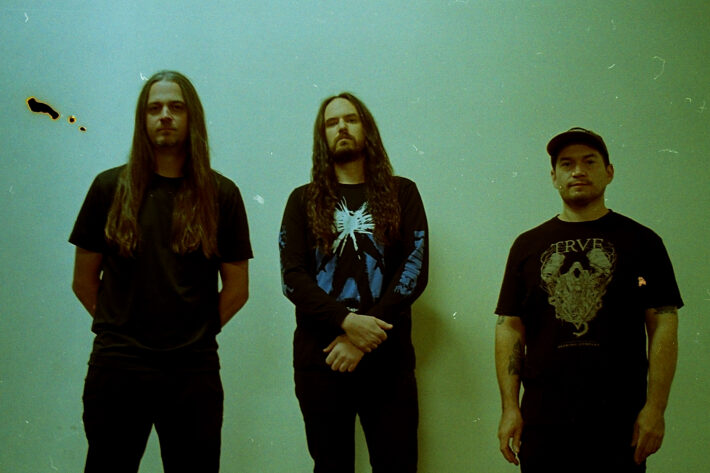 They call their sound depression rock, and they come from the scorching heat of Phoenix, Arizona. Secret Iris is the new project of three veteran musicians, a project that’s been underground for some time but now these guys are ready to present it to the world, with the impending physical release of thei debut EP, What Are You Wating For/Extrasensory Rejection.

Hi, this is Rick! Who am I talking to? What’s your role in the band?

Hey, Rick, this is Jeffrey [Owens, from Goya, ex-Spirit Adrift]. I sing and play guitar in the band.

All you guys play other known bands; how did you find each other, and why did you decide to play together?

I’ve been friends with both Tanner and Matt for years, and found them both to be the perfect fit for the songs I had ready.
Tanner [Crace, from Sorxe] came up to me at a show one night and said he had heard I was starting a new band, then asked if we needed a bassist. I asked Matt [Arrebollo, from Gatecreeper] if he wanted to do a record with us after a couple of years of struggling to find a drummer that was dedicated enough, had the time (a global pandemic helped with this), and had the chops to perform the songs with precision.

Additionally, why form a whole new project instead of releasing these two songs under the name of Goya, maybe as a feature?

I began writing new material for Goya in a different tuning. My thought was to only play that new material moving forward, for a lot of reasons. That didn’t go over well with the band, so the best move was to just start a new projec. Ironically, that album remained in demo stages, lost in the aether. Maybe I’ll revisit it some time, but probably not.

Where did the sound of Secret Iris come from? What about the lyrics, what were your main inspirations at time of writing?

My father passed away shortly after I went through a really rough breakup, and I turned to drugs around that same time, so it was just a really bad period of my life, all around.
I was touring in another band (that I have since quit), and I wrote that now-discarded album during that period. When I started to sort of recover from all of this, I fell head over heels in love with someone. This is when I wrote What Are You Waiting For.

I didn’t quite realize exactly what it was about at the time, but I recognize now that I was processing fear of abandonment, and the inevitable crushing sadness that comes with it, for me. There’s more to it than that, but those are the nuts and bolts of this half-decade story.

Why did you release just two songs? Do you think you’ll publish a whole album in the future?

We had 12 songs we were working on to release. I think that I was really sick of waiting to introduce the band, after years of working on it and struggling to get it going. Once I had both Tanner and Matt, it made sense to get these 2 songs done quickly and release a 7″, so that’s what we did.

So, yes, we do have 10 more songs ready to go, and that record should be out in 2023. I mean, it should be out now, but vinyl pressing times are insane, so even if it was off to press today, it wouldn’t be out until next year.

In an interview you said that Secret Iris is a studio project; Is it different to write songs for such a project and for a proper band? Are you inclined in taking more risks because you won’t be playing these songs live?

In Goya, we record live with as few overdubs as possible. In Secret Iris, we track everything separately, so it is a pretty different process. We don’t consider how we are going to recreate something live in Secret Iris, we just record the best version of the song that we’re capable of recording. I do like to think of us as a proper band though!

The 7” record is the first release on the new label Crisis Tree Records, specialized in limited run 7” vinyl. Why did you choose this label? How did you find out about it?

Many thanks to all the guys in the Secret Iris for this interview! You can found their debut EP, released digitally in 2021, on Bandcamp and on the label’s website. Follow the band on Facebook and Instagram and don’t miss any update!