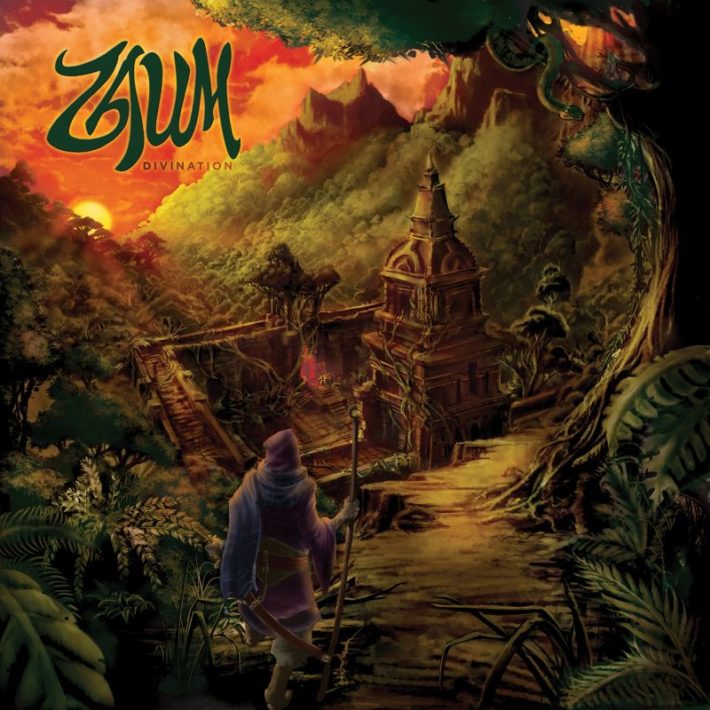 Zaum first appeared on the scene with their 2014 debut „Oracles“, and it was quite something. Cynics called it a straight-up Om rip-off, and while the similarities were more than tangible, Zaum managed to provide something unique. Just like Om they passed on the guitars, but instead of going in fully stripped, they opted for a sort of sitar-bass combo and as strange as it sounds, Zaum made it work. The two instruments neatly complimented one another and gave the band a totally unprecedented sound that worked perfectly for their intentions. It was still firmly rooted in the stoner doom method, with the bass drenched in distortion and amped up until it was positively huge, as well as the riffs that plodded, pounded, swelled and destructively released just as any doom band would. But Zaum put all this in the service of a psychedelic sound, coining their own term “mantra doom”.

And they succeeded – the songs were hypnotic, dreamy, otherworldly, accentuated by the middle-eastern themes and confirmed by adventurous songwriting that never just hinged on repetition. It was a sublime desert trip that bands sought to perfect ever since “Dopesmoker” came out way back. Their sophomore record, “Eidolon” didn’t change much in the overall approach, but it was much more ambitious than “Oracles”. Comprised of two songs, both clocking in at 21 minutes, Zaum sought to deepen the trip, to bend the minds of the listeners even further. And it certainly worked. The lengthy songs were even more psychedelic, even more out there and they held the listeners attention steady.

Here we have their third effort, titled “Divination”. Zaum have expanded their instrumentarium, adding many exotic items such as jaw harp, digeridoo, finger cymbals and many others. They seem intent on pushing forward, enriching the textures. The album structure is perhaps a tad less ambitious this time around, opening with a 18-minute piece and continuing with two shorter songs (8 and 14 minutes respectively). Have they succeeded in making their next big step?

Unfortunately, I’m going to have to call it a resounding no. As much innovation as they’ve anticipated, it isn’t really heard. The band still sounds very much the same as they did on the previous record. They haven’t regressed, but they really haven’t pushed their approach enough nor employed the new sounds properly to make them somehow stand out. I’d maybe even suggest that the songwriting didn’t quite work out this time. The opener “Relic” drags on for too long, not really achieving the magic their other long songs succeeded in. Although “Pantheon” and “Procession”, the other two songs, are much more concise and coherent, and certainly more enjoyable.

It’s in no means a bad record. It’s just more of the same old. But Zaum are in the thankless position of making music thrives in the entrancing effect it has on the listener. Trying to achieve it with the same spell the second time around might wear down the magic. The seams start to show, the structure is bared, it no longer achieves the enchantment. Still, Zaum are very good at what they do and if you liked their previous records, this one is certainly worth a spin. They also seem to have a drive to move their art forward, and I’m certain they got it in them to make another record that’ll once again knock us out of our boots.