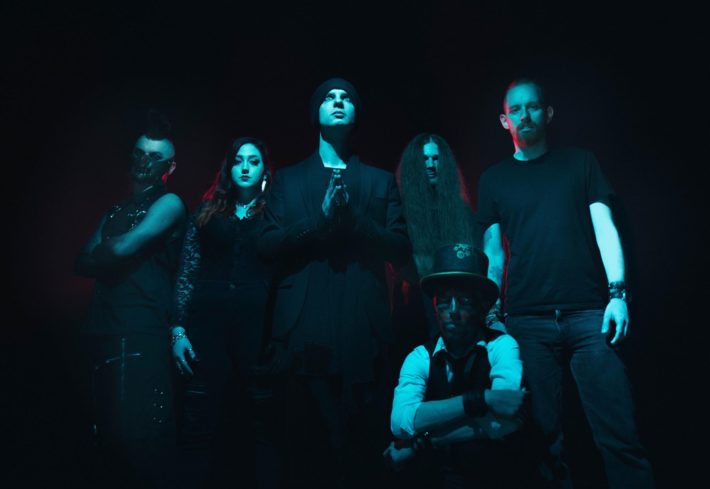 Her Despair are about to publish a new EP, “Exorcisms of Eroticism”, and I had the chance to interview them: we talked about this new album, but also their future plans, their songwriting process and how’s life for an up-and-coming band nowdays.

Hello! Rick from MetalUtopia here. Who am I speaking with? Tell us a bit about yourself/yourselves and the band!

Thank you for having us – this is J from the UK gothic rock band HER DESPAIR. We comprise of myself singing, Dan and Jordan on guitars, Vikki on bass, Lee behind the drums and Toby playing keyboard. We’re releasing our new EP “Exorcisms of Eroticism” on 22nd November and we can’t wait to share it with you.

Listening to the album, the vocals bring the mind to HIM, and The 69 Eyes, and you all have said to be fans of this band. What are other artists that have influenced you?

Both HIM and the 69 Eyes are definitely huge influences, and the predominant divine inspiration behind all of this will ever remain the Sisters of Mercy. Other main contenders would include Rammstein, Nick Cave, Abba, Misfits, Staind, amongst many others.

Thank you for that description, I feel that’s a very accurate interpretation of what we’re trying to achieve. The songwriting process is probably my favourite part of being in a band.
The songs tend to begin life after dark when I’m shut away in a room with my guitars and keyboard. I’ll come up with the basis of something, then usually start moaning away with some sort of melody over it that become lyrics, or find some piano leads that sit well and work from there.
Not quite by candlelight, but you get the idea.

Then I’ll take what I’ve got to the rehearsal room and show the band, we’ll bring it all together, and the song really starts to come to life. Creativity flows, different thoughts and perspectives are shared, and usually by the end of the session we have a fairly strong first draft of the song.

Overall we wrote “Exorcisms of Eroticism” in a fairly brief space of time. Once the songwriting begins we get into it fairly intensely, and working versions of the songs are written in fairly rapid succession. There is of course considerable fun to be had from the subsequent refinements and edits, which usually take as much time as is desired.

The songwriting wasn’t hugely different for the heavier songs versus the slower songs necessarily, but the vibe created during the process was.
For example writing “Pandaemonium” with the guitars on full overdrive and double kick pedals caused a different kind of creative atmosphere to writing “Beyond the Veil” with acoustic guitars and pianos.
We still retained the same feelings of achievement and excitement, but in different ways due to the nature of the songs.

Symphonically we really wanted to add more to these songs, and make them bigger than any of our previous output. More choir. More orchestration. More nuances in the mix for a touch of intricacy.

In terms of the choruses throughout, we wanted to take a “goth pop” approach. Something suitably dark and foreboding, but also something catchy that our audience can sing along to, whether on disc or at a show.

On your Facebook page I see there are a couple of UK dates planned. Are you thinking/have you thought about a tour, in the UK, Europe or America?

We’ve got three amazing shows lined up to finish this year – the Marquis Masquerade Festival in Whitby supporting Johnny Deathshadow and Sometime the Wolf, followed by a date in London supporting Naut in late November, and then a hometown headline celebration performance for the release of “Exorcisms of Eroticism” in early December.

Our 2020 performance plans are currently somewhat under wraps, but will be revealed soon enough. We will certainly be aiming to broaden our horizons. We’ve been deeply flattered by the many requests to perform much further afield, both at home and abroad, with our fans in the USA being particularly enthusiastic. Fear not America, one day we will come for you…

Her Despair currently collaborates with Dewar PR, and the album will be released via Bandcamp. How did you come in contact with this reality? Do you consider yourself a self-produced band?

We’re very pleased to be working with Dewar PR again after the success we had releasing “Mournography” last year, and have recently also teamed up with New Dark Ages PR (who have worked with Mortiis and Christian Death) for this final month before the release, who we feel will really help spread the Gospel of Despair.

“Exorcisms of Eroticism” is available to preorder now as physical or digital via Bandcamp, which includes two instant song downloads of the singles “The Exorcism” and “Pandaemonium.” It will also be on all the usual streaming services such as Spotify and Apple Music, along with YouTube, Soundcloud and so on.

Yes, we are a fairly self-produced band – obviously we work with people who are far wiser than us for recording, music videos, PR etc, but there’s no management or label behind us. Not to say that isn’t something we would be interested in.

Staying on this topic, how difficult do you think it is, for a young band, to “make it” in the music business?

Very. There’s a plenty of talent out there, and nowadays it’s fairly straightforward to get original music online. That means there’s plenty of opportunity to demonstrate what you can do and discover something new, but I suppose it also makes it more difficult to gain people’s attention. There’s always something else that comes along.

If you were to collaborate with someone in the future, who would you like to do a collaboration with?

In the future, once death has come, Jim Morrison.

And finally, the year is almost over, and with it, this decade is ending too. How would you summarize these first years as a band? What do you feel were your biggest accomplishments, and what would you have preferred to do different? What are your hopes and aspirations for the future?

We feel we have had our most successful year yet, and thank everyone who has been a part of it. “Mournography” started to get some attention after it was released in July 2018, and since then we feel we have been moving onwards and upwards.

We’ve played several shows and festivals across the UK, with more to come. Darker Days Festival and Carpe Noctum in Leeds were particular personal highlights from our live calendar.

We’re very excited to be unveiling “Exorcisms of Eroticism” soon. We’re confident it’s our best release yet, and we hope you enjoy how dramatic it is. There’s also new merchandise on the imminent horizon, so prepare for new ways to wear your Despair.

Thank you again to all of you for your endless support – you keep us (almost) breathing.