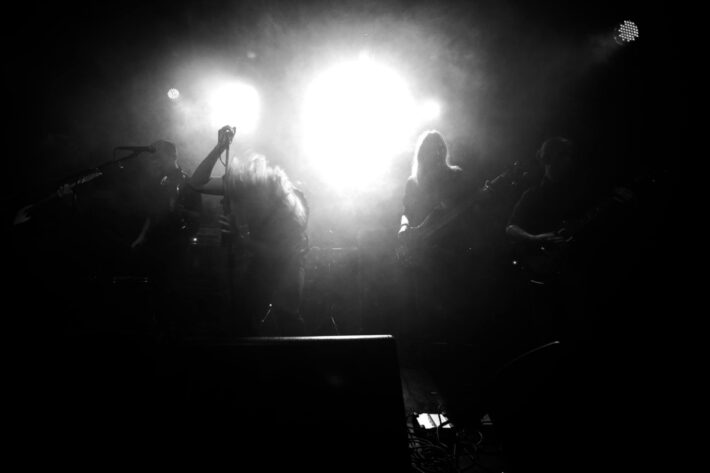 A brutal and more-important-than-ever piece of work, Hostile Architecture by the Scottish band Ashenspire is set to be on almost everyone’s Albums Of The Year list. I had the enormous pleasure of chatting with the band for a bit.

Hello, Rick here. Who am I talking to? What do you play in the band?

Benjamin: Hello Rick, this is Benjamin and I play bass in the band.
Alasdair: And I’m Alasdair, I play the drums, plus the lead vocals on the record.

“Hostile Architecture” has been out for about quite some months now, and it was met with stellar reviews and many praises – both for the music and the lyrics. Did you expect such a reaction? Were you surprised?

Benjamin: I certainly felt if folk heard it they would find it at least interesting but no, I didn’t expect it. I’m surprised that things have lined up as they have and I am happy for us that there is some buzz. A lot of work went into it.

Alasdair: It’s been a mad time. For my part, it’s amazing that it’s reached the folk it has, but I agree that it’s the product of everyone’s talents and hard work.

While the music is no less important, for this album I think that the lyrics take the spotlight: you summarize the many horrors of late-stage capitalism, including drug addictions and homeless, and from the start you point out that “this is done with full intent”.

Lyrically I feel like there’s a sort of progression throughout the album: starting from hopelessness and anger and finishing with the – tragic? – willingness to organize and fight; the chorus of How The Mighty Have Vision sounds like the beginning of this turning point. Did you plan the album, the track list like this?

Benjamin: Alasdair conjured the concept and lyrics. There was a solid plan in place before going into the studio and for my part, the work went into making sure the music was cohesive, so whatever Alasdair was going to do could sit in a place that made sense. And as much as there was a plan, being in the studio informs what can actually be done, so some things developed or were altered to again make sure everything Alasdair was doing would make sense. There’s a lot of good words written, he has a way with it and you can hear it from the get go. He certainly gets me paying attention when he’s behind the microphone.

Alasdair: The tracklist was ordered for flow first, and then edited for how it would physically fit on an LP – I knew that The Law of Asbestos had to be first and Cable Street Again had to finish (I knew as soon as I wrote “Get down off the fence before the barbed wire goes up” that it had to be the closing words of the album), but I do see the turning point you’re referring to.

While it’s clear that your main lyrical inspirations were past events, as in Cable Street Again, or just everyday reality, did you have some past artists, musicians or even writers, whose works inspired the songwriting on the new album?

Benjamin: The list is certainly expansive. Meet Al for a beer or cool lemonade and he’ll talk to you about this until you actually want to leave.

Alasdair: He’s right, I could talk about this for hours so I’ll keep it brief! Thematically, the core text the inspired the record was Mark Fisher’s Capitalist Realism, which I’ve made no secret of – it’s a book I think everyone should read. In terms of my approach to writing text, Ed Scissor’s writing is a big inspiration to me; he has an incredible way with words, the rhythm and feel of them, and just conjures up incredible images in his work. The bleakness of modern life infused with the warmth of humanity.

Jazz music meets extreme metal in your songs, each of them carefully crafted with layers of arrangements; in the hands of someone less skilful it would have sounded just messy and uncoordinated. What was the writing process like? Did you start off by a guitar riff, or a particular idea, and just build the song one instrument at a time? Or did you write all the instruments, all together?

Benjamin: Exactly, in our hands it works but the whole thing is a carefully concealed mess. A very skilful mess perhaps. Behind the veil of sonic shenanigans is a group of friends with various backgrounds and experiences in a variety of music. Alasdair sent out the call to the group and presented an album written on the computer along with some rough demos and we said “what?”

Alasdair: Hah! One of these days I’ll find a way to make the music I’m writing more… playable.

Benjamin: Thereafter Scott [pianist] sat diligently with Al and together created a plan for how to record what these computer noises were indicating. Then they gathered us, the noble musicians, to interpret the finely tuned scores as we saw fit. In the case of guitars, Scott worked a lot with Fraser [guitarist] to figure out what the craic was. Alasdair drummed the shit out of the drums and Scott wrangled that into its final form.

While that was happening, this was over the course of I think 8 days in the studio (at that point Ashenspire had not all played together in this current form and wouldn’t until some months after the album was recorded), James and Matthew were dipping in and out to record their violin and saxophone parts. Massive praise for those two, who are not performing with the band now but really came in and knocked it out the park.

Alasdair: Totally agreed. Their dynamic and their willingness to just dive in and buy in was incredible.

Benjamin: Petri started on the bass but could not ultimately follow through so I was asked to step in and start from the start making my own sense of whatever the heck was going on. There were only a few days left at that point so it was nose to the grindstone to figure it out and make the album an album. Alasdair was doing the vocals when he could around his work schedule, the majority of the record is his first take. Rylan and Amaya too had a day in which they recorded their parts [tenor/baritone and alto/soprano]. The dulcimer was a transatlantic exchange.

Alasdair: Honestly it stuns me that Ben came in and nailed the album’s bass without ever having heard it. Just a quintessential musician; the bass is such a core component to the record now, in a way I couldn’t have foreseen, and I can only think how the next record will sound when Ben’s had a chance to actually hear the material and be part of the writing process!

Rylan and Amaya did an incredible job – originally they were only meant to be half of the vocal ensemble but the pandemic being what it was, they ended up recording every part, and they nailed it. Otrebor [dulcimer] from Botanist was absolutely lovely to work with, he really brought a lot to the table. Hoping to work with him again some time!

Benjamin: Scott then mixed the carefully crafted mess into a very convincing album which you now hear. It was an interesting experience for everyone, a good chance to do what we all love doing. Even if it was a bit stressful.

Alasdair: Aye. I think the record really captures the energy of that time. Scott is outstanding at his craft.

The listening experience for me felt very cathartic – a scream of anger against both the tide of fascism and the apparent apathy of the majority of the people when confronted with the situation. This is all to say that it’s a very intense album. What feeling would you want your listeners to experience, while spinning Hostile Architecture?

Benjamin: Yeah, totally, absolute fucking brutality mate. I want the listener to experience an at least average time and if it really tickles their pickle, then that is just great. I find it a bit too noisy to be something I’d listen to a lot of but I like playing the songs and having a good fun time. If people have fun listening to it, then that’s also great.

Alasdair: I saw someone say that listening to the record made them want to quit their job. That was a pretty strong endorsement. Really I want people to come away from it genuinely believing that a better world is not only possible, but necessary.

Additionally, I wonder how was the atmosphere in the studio, while you were recording this album?

Benjamin: I have only twice seen Scott give me a particular look in the twelve years we’ve known each other and done music together, one of those times was during this session. That accounts for 1% of the atmosphere. The other 99% was loosey goosey fun laughs and solid ‘n sloppy takes. I suppose it depends who in the band you ask. Scott was the one there for the whole 14 days and I bet he felt every minute of it. When we saw each other, whoever was in doing whatever, it was nice. Very warm atmosphere. Cosy you know, like home.

Alasdair: It was a pretty special time and place. Beautiful and intense. Hard work and joy.

I saw that you’ll play some shows in Germany. Any plans for a proper European tour? I also read that you switch your line-up a bit, to accommodate the necessities of playing live…

Benjamin: There’s six of us travelling at any time. Sometimes it might change a little, everyone has lives and other stuff going on. Right now, with all this craic in the world, it is pretty spenny to move our troupe. If the money is there, we can do it, perhaps? We’ve had some funding from Help Musicians, that covered the German extravaganza which, by the way, was also lots of fun. Abest deserve a mention. That was three days. A proper tour, ten days? We plan to but it has to be worthwhile for everyone. Denmark is next in February, another three days. That’s manageable. Also, fuck Brexit, it’s fucking fucked it.

Alasdair: We’re managing to get wee scraps of touring here and there – hopefully soon we’ll be able to get a proper jaunt together. And aye, Brexit has shafted UK bands. Still, onwards and upwards.

Many thanks to this incredible band! I am unashamed in saying that this is already one of the most important album on the decade, so go listen to it! Ashenspire’s Hostile Architecture in on Bandcamp, and you can follow the band on Instagram, Facebook and Twitter.