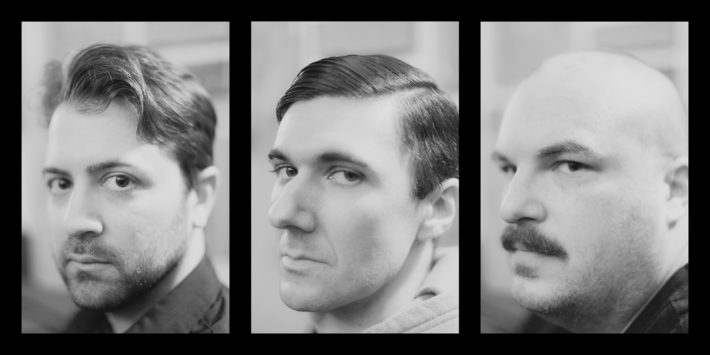 Avant-garde trio Psalm Zero has released its third album, “Sparta”, on February 24th; a few days before, I spoke to the leader, singer and founding member Charlie Looker.

This is the first album to be released on your own record label, Last Thing Records. You, as a musician, and Psalm Zero, all come from the NYC underground scene; how did it feel to reach such an accomplishment, releasing this album on your own label and on your own terms?

It feels great to present what I’m doing in a completely self-contained context, like its own realm. Going to the post office is definitely the worst aspect of it, especially for a scatterbrain like me. Working with other labels is cool too; it just depends on the label, the specific project, the timing.

Sparta differs from its predecessors with more synths and doom-ish guitar riffs rather than black and death metal elements; the sound quality is more hi-fi, too. So, sound-wise, how did you balance keeping up with what you did, and the will to innovate?

The whole point of forming Psalm Zero in the first place was to doing something in a “rock band” context. This could mean many different things to me, and it’s clearly changed. Most of the death/black metal sections in the older Psalm Zero were written, or at least influenced by, former guitarist Andrew Hock. I was also listening to far more of that a few years ago. So after breaking with him, and just getting into a new listening phase, the change was natural.

On this record, there are also two guest singers: Daisy Press, and Kristin Hayden from Lingua Ignota. Why did you choose to work with those to singers? Do you believe there are ties between your music and Hayden’s?

I’ve worked with Daisy on several projects in the past, including my solo record from 2018, Simple Answers. She’s an amazing interpreter of the music of Hildegard von Bingen, so she brings that mystical, medieval sense to things. As for Kristin, I’ve had tons of respect for her since I first heard her a couple years ago. As with Daisy, Kristin shares my love of ancient European music, medieval and renaissance sacred music, which she brings to her own stuff very clearly. Her music is obviously more aggressive and confrontational than mine, which has more pop elements. But we share that influence of early music.

The haunting video clip of The Last Faith was directed by artist, director and occultist Joan Pope. Why did you contact her? And, I’ve got to ask, is it a coincidence that you collaborated only with women (outside of your band members) on Sparta? Do you believe that women are still underrepresented in today’s alternative scene?

I actually first became aware of Joan from the philosophy scene on Twitter. We had a lot of mutuals and similar interests. Then I saw her work with Zvi (solo music of Ron Varod, from Psalm Zero) and I wanted to work with her.
As for the various genders of my collaborators, these are just the artists who I wanted to work with. I guess if you’re into a variety of aesthetics and vibes, then you’ll automatically attract a variety of people. But I have no personal, conscious determination to create situations where different genders are represented in any particular proportion. I have my own personal, evolving ethics around how I want to behave toward people, and I might consider gender politics around that, to some extent. But I don’t do quotas.

The lyrics from the new album convey a sense of oppression, anxiety, connected with the urge of taking a collective stance as mankind; the need to take back our humanity, lost in a dystopian future that is governed by the law of the strongest. If we reflect on the title too, do you feel like the human race is going backward, socially-speaking, as our technology advances? How do you see the future of mankind? Is there any hope for us?

Yes, I think things are going “backward”, but only from the point of view of the idea of “progress”, which I’ve come to regard with real suspicion. I’ve been wondering lately if there are some possible futures which might seem scary, but ultimately could turn out to be better for everyone, in some way that it’s impossible to see right now. But yes, from where I’m sitting right now, I’m feeling a lot of anxiety about the future, and about the present.

Apart from Psalm Zero, you have a number of other projects: you play improvisational jazz with Period, you have a mostly acoustic Renaissance-inspired project known as Seaven Teares, you released the solo LP Simple Answers, and you currently hold your own podcast Fluid Exchange. All these projects are very different from each other, too. How do you harmonize all of this? Are they all different sides of different artistic views, or just disparate ways to express the same concept?

I don’t have a single concept I’m going for. It’s all just part of a journey of becoming. Fluid Exchange is actually defunct now, although I’m very proud of that one season we did. For me, that talk-show kind of idea is now being directly to my YouTube channel (link at the bottom).

The tour you’re about to start is along Kayo Dot, a band from which the two new additional members of Psalm Zero come from. How does it feel to have members performing two shows a night? How do they feel about it? It’s kind of a peculiar arrangement.

It’s just Ron who’s coming on this tour. No Keith. We’re doing electronic programmed drums, like Psalm Zero used to be in the early period, but with the new songs. Ron seems to be cool with double duty. He’s tireless.

My last question is a reflection upon the past. In 2015, right after your debut album, the heavy metal blog Invisible Oranges said about you: “A paradox: bands that sound unique, or have no obvious peers in terms of sound, often struggle to find an audience”. Five years later, and at your third album, how do you feel about this statement?

Psalm Zero certainly isn’t struggling to find an audience. But the accumulation has been a slow, and consistent, burn. Music that doesn’t immediately fit into a clear category often gets passed over by fleeting trends, but I think unique music can have way more durability, the way fans really commit to following you deeply, and staying with you through the years.