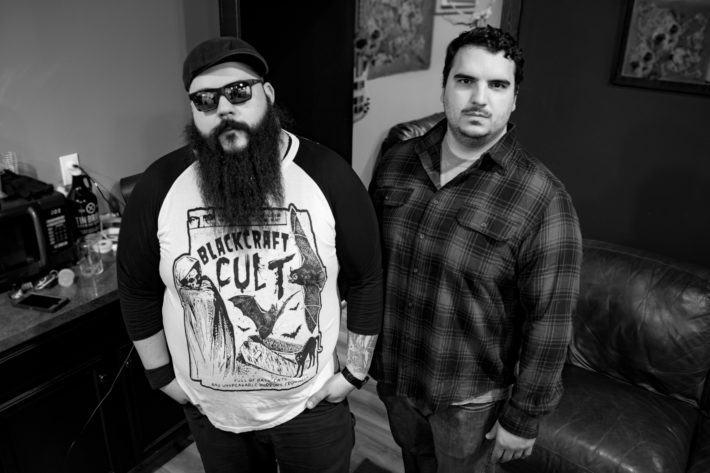 On February 14th, deathcore trio From Under Concrete Kings released its second EP, “Modus Exodus”. I had the chance to ask the members some questions: here are their answers.

“Modus Exodus”: four deadly tracks, carefully put together. What are the criteria used in deciding the tracklist? Are there any songs that were left behind?

We left that up in the air until the record was getting mastered, and then decided the track list over a large bottle of café patron. We don’t remember how we decided the list, but we did write it down. There were ideas for songs we mulled over the idea of finishing for this release but in the end, we decided to table them for EP3.

Out of four songs on the EP, three of them have their own video clip. How did you choose the theme for each video? Do you think that nowadays it’s important, for a band, to shoot videos to promote its material?

We actually have another video coming soon for the last of the four songs on this EP. As far as themes go, some were more focused on lighting and setups, while “DESTROYER” and “Grim Satisfaction” have more directed concepts and scripted scenes.
As far as the importance of shooting videos, being an independent band with no industry support makes large scale and international touring virtually impossible to achieve. Focusing on digital content ensures our content can be seen and heard the world over, so for us it’s tremendously important.

Currently many bands are postponing their tours due to the recent outbreak, and this is highlighting how bands heavily rely on tours to make a living.
How do you feel about this? Have you been affected, professionally speaking by this epidemic, and if so, how?

We were beginning to set up some touring runs for the summer months right when this all started getting serious and those endeavors had to be put on hold until all this blows over, so we are feeling this directly. It’s all really scary stuff, and the scariest bit is not knowing where it’s all going to land or when it’ll actually get back to normal.

You are a trio, one drummer, a bassist and a singer. How were all the other instruments recorded? On the song “DESTROYER”, for instance, Jeremy Litton and Alicia Marinelli were guest guitarists. Do you feel more comfortable working as a trio and having guest musicians?

Josh (Previte, bassist) typically writes and produces all of the instrumentation including guitars. Fortunately, we know some talented musicians that can come in and actually play his crazy ideas.
As far as logistics go in building and running a project, the smaller the group, the easier things are. Overall I’d say it’s much easier this way.

You recently collaborated with sound designer and producer Jon Kita on the song “Take Heart”: what prompted this collaboration? Is it different to work with a producer rather than working on your own?

Jon and the entirety of From Under Concrete Kings all played together in our last project, City of Homes. Jon actually wrote “Take Heart” for that project, but it fizzled out sometime around post production. We finished it out as a collab with help from the rest of the Concrete Kings guys so it would actually see the light of day.
We’re pleased we did, because the video for it came out awesome and passed over 60k views on YouTube in about 7 weeks. It’s been tremendously well received and exceeded all expectations.

I’m always interested in what does a musician listen to, so: what was your favourite record from last year? And what album are you mostly looking forward to this year?

“Shaped By Fire” by As I Lay Dying and “Atonement” by Killswitch Engage were probably the coolest records I listened to last year. I’m stoked for the new August Burns Red coming out, and my buds in Kingsmen are dropping a record soon too. I’m pumped to hear the whole thing next month.

Thanks to the guys in From Under Concrete Kings for their time. “Modus Exodus” is out now and it can be found on Deezer, Google Play Music and YouTube Music. Follow the band of Facebook and Instagram.