So, I got to interview this band, called “Stage of Reality”. Here’s what we were talking about: 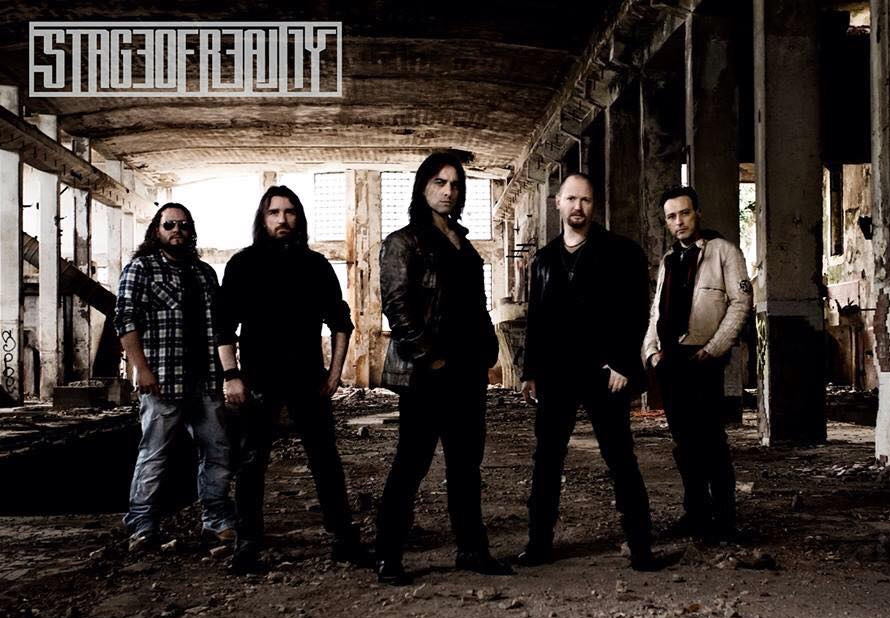 Hello, who am I “talking” with? And who are the other members of “Stage of Reality”?

Hi, I’m Andrea Neri, guitar player and composer of the band. The other members are:

Where comes the name “Stage of Reality” from and how did the band start?

The name Stage of Reality comes from my personal need to create something that could explain my feeling about the world. I think we are living a quite peculiar situation nowadays, we are surrounded by fake things: television, news, politics. Everything can be true or false, so what is the reality? What is not? On stage there’s a representation of the reality, actors and musicians play something, the fake it, they give you their own version.

Stage of Reality means that.

Our band has started on 2013 as a solo project, I wanted to write an album and speak about Pasolini’s idea of television and modern media, I wrote a concept story, then I started to write lyrics and music and then I looked for musicians to join the band and make it happen. We’ve started from the cd production.

What are your influences/inspirations?

My inspirations are artists like Alter Bridge, Ozzy Osbourne, Metallica, Queen, Gun’s and Roses, Led Zeppelin and Deep Purple – I got a lot more and I listen to a lot of different music like classical and jazz, but the list would be really too long!!!

You could describe your sound as prog rock / alternative metal. Do you think there’s still enough request for this kinda music?

I like to think about The Breathing Machines as a hard rock/prog/alternative album, someone found it crossover because of the slap bass, the straight drum and the prig guitars. Sincerely I’m not good with music genres.

I think that the request for a kind of music comes from the need to listen to something new, maybe in some countries they don’t like us, but fortunately the world is big enough to find our fans somewhere else.

What do you think about the Italian metal scene?

have you got another question? Ok…. Let’s try to be political correct here. I think we got a lot of good bands, but no one really believes that it would be possible to make money with this kind of music. In Italy the labels care much more about tv than cd’s. They people to make talent shows and who watches talent shows? Of course not metal heads nor hard rock girls!

What are the most beautiful or funniest moments in the history of the band?

Our history is really short right now, but a couple of weeks ago we were having a streaming interview on google plus and we spent twenty minutes trying to figure out how to seat in front of the webcam to allow people to see us playing live an acoustic version of one of our songs… five people with instruments in front of a webcam has been a sort of impossible things and we were like a bunch of cows trying to take a seat!!!!

What are your goals for the future (festivals, cooperations, tours)?

everything you listed! We singed a contract with a manager from Usa and she’s working to give us the appropriate exposure in the States, it seems that over there we are starting to have a very good fan base and we are really happy about it.

Can you live from the music or do you still have “normal” jobs?

You’re on all big social networks. How important is it to stay in contact with your fans via internet?

Nowadays it’s really important, it allows you to be in touch with people and to check if in other countries they like you or not.

You’re a very progressive band. Do you prefer recording or being on stage?

On stage we are really a rock band, we don’t consider ourselves so progressive, we like to perform and to set venues on fire. On stage you can feel the energy coming from the people attending your show and you can give them back the same energy with your music. There’s nothing better feeling on earth.

Your latest album, which I enjoyed a lot, is a concept album. Which story does it tell?

The Breathing Machines tells a story set in a near future, people aren’t able anymore to feel or to criticize. They live their lives like grey men, people without colors, people who are only able to make basic decisions. Books don’t exist anymore, people use to get information only from tv and social media and there’s no more contradiction because people are no more able to get deep into things, they don’t want to know the truth, they just live their days and every day must be a perfect copy of the previous one, no surprises, no feelings allowed.

But in this future there’s someone who’s is going to reveal the whole world that there’s something we should do to avoid to live like machines, breathing machines, but still machines. We have to wake up and understand that what make s the difference between us and a computer is that we can feel, we can taste, we can use our brain to criticize and to make a better world.

If you would have to choose: Iron Maiden, Dream Theater or Iced Earth?

Iron Maiden of course! Their live shows are awesome and huge!

Are you interested in football? If yes, which teams do you support?

we are definitely not interested in football, I know it sounds strange ’cause we are from Italy but this is it. We’ll work on a Stage of Reality football team anyway, it seems to be cool having a band team!

Something you would like to tell your fans and our followers?

Help us to spread the voice, listen to our music and follow us on the internet ’cause really soon we’ll come to your countries to set some stage on fire!!!

Thank you for the interview and let me know when you’re playing in South Tyrol!

Great! I love South Tyrol, it would be awesome!

Thank you for this opportunity you gave us.

If you wanna check out the band after this awesome interview, make sure to check these links: