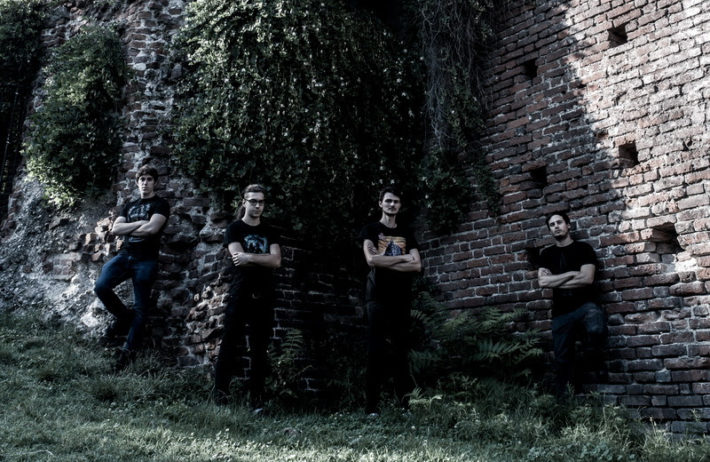 Having a talk with compatriots is always a blast; in this interview with Abeyance we talked about their debut EP, released at the end of previous year, how are things going in the local scene, and more.

Hi, this is Rick! Who am I talking with? Tell us a bit about the band and yourself.

Hi Rick, thank you for this interview!
Since each of us will put some of his own in every answer, we’ll simply introduce ourselves as Abeyance.
Starting with the monicker, it must be said that it wasn’t always that one from the beginning. We initially chose “Evervoid”, but we changed name in 2018 for something more original.
Well those “Evervoid” were not very different in intentions and objectives from the current band, but the linup was totally different (except for Jacopo (Marinelli), the singer).
The songs that were written are basically the ones you can hear in the EP, although there were some changes over the years.
We like this idea of having inherited the passion and dedication for this music as a single entity that changes its shape but not its spirit.

Abeyance formed in 2016, while “Portraits of Mankind” came out in the late months of 2019. Was the writing and recording progress difficult?You also had a number of line-up adjustment, changing drummer, bassist and guitarist.

Yes, as mentioned above there have been several linup adjustments that have slowed things down a bit. But every musician who played in the band left something in the songs, in terms of songwriting. However, what slowed us down the most was the search for a stable bassist and a valid label.
The registrations instead went rather well, with fast times and a satisfactory result!

Your singer, Jacopo Marinelli, and lead guitarist, Gianluca Fraschini, have already played in other bands; what about the other members? Is this their first time recording and publishing an album?

Each of the current members is involved in other musical projects at various levels, some are starting up while others have already conquered their space.
Honorable mention for Giacomo (Boffi), the drummer, who with the alternative metal band Parabola released the single “Smeraldo” in November 2019.
However, for each of us “Portraits of Mankind” is just the first or second release experience!

You got signed with Sliptrick Records even before your debut. How did the label found you? Do you consider yourself lucky for having a record deal already, with “just” one album out?

Yes we were very happy with the opportunity to deal with an international label right away. We worked hard to send the album to many labels both through digital channels and by sending the physical copies out.
We have always been very determined to start immediately with the right boost, the support of a good publisher and a good promotion.

As its main influences, Abeyance quotes Swedish melodeath bands from the ‘90s, such as At The Gates and Dark Tranquillity – this is audible in the music too, however it’s mixed with modern elements. What are the new trends you’d like to see in the melodeath, or in metal in general, today?

Melodic death is surely one of the most influenceable and malleable subgenres of metal, but we really like how bands like Insomnium, Be’lakor and Eternal Storm have been able to so skillfully shape a more refined style, tending to doomish, dreamy sounds and rhythms. It’s an approach that we will certainly consider for some of the next songs, always keeping our focus anchored to the 90s. Progressive and symphonic are influences that we are happy to see spreading in today’s metal. On the other hand we are not very inclined to consider the -core universe even if there are obviously very talented groups that we appreciate, such as Darkest Hour. But it is certainly not a path on which we will venture.

Future plans for a tour? Is there a band you’d like to open for?

Touring is something very indefinite for us at the moment. It’s difficult to plan or foresee possible opportunities, even if we are moving to make it one of our priorities. We are confident that with the release of the next album we’ll have a good base to perform on multiple dates, perhaps even in Europe and worldwide. Doing this by supporting bands like Omnium Gatherum, Eternal Tears of Sorrow, Eternal Storm or even At the Gates (just to name a few) would surely be a dream come true!

You are all from Milan, Italy. As an Italian myself, I’ve got a couple of question about the current state of metal music in our country. First of all, how is the local scene in Milan, and the underground Italian scene in general? There’s also the recent news about Agglutination Metal Festival, possibly the most important festival in Italy, shutting down.

Well we can’t say that the Italian metal scene is thriving and intense.
However, there are many small and medium booking agencies and clubs that bend over backwards to make Italian bands play and keep the scene cohesive, and we are very grateful for this. Certainly in recent years there has been a decline in the popularity of metal, although in Italy there are many groups, and new ones are born every week (among the highest statistics in Europe for this).
However, the clubs that host undeground concerts are fewer and fewer, and therefore tend to close or divert the gigs to other themes. Bands like us and like many that we know in our area and in Italy we will continue to do our best to make this music survive in our country, and spread it as well with all the means available today (many more than in past decades, and this somehow helps).

Secondly, despite metal not being a very popular genre here, there’s a growing number of Italian bands enjoying success abroad – not only Rhapsody and Fleshgod Apocalypse, but more recently (even if comical) Wind Rose and Nanowar of Steel.
It is more difficult to become professional metal musician in Italy, than in other countries? Does metal still carry the same stigma it had twenty, thirty years ago?

We believe that in Italy things are moving very slowly in this direction. It seems that bands take on average much more time than foreign bands to gain their visibility, and their international space as professionals. It will be difficult to achieve high-level success in less than 10 years and 3 or 4 releases here. Obviously there are exceptions, such as the mentioned Fleshgod Apocalypse, which had a very rapid rise and we are happy to have them as standard-bearer of extreme metal in Italy.
However, in general, metal gets much more attention in central and northern Europe or the USA, and it is consequently easier for groups in those countries to have professional growth opportunities.

Thanks a lot to the guys in Abeyance for their time, and best of luck with their future plans. “Portraits of Mankind” was released on November 27th 2019 and can be found on Bandcamp here. Follow the band on Facebook and Instragram here.