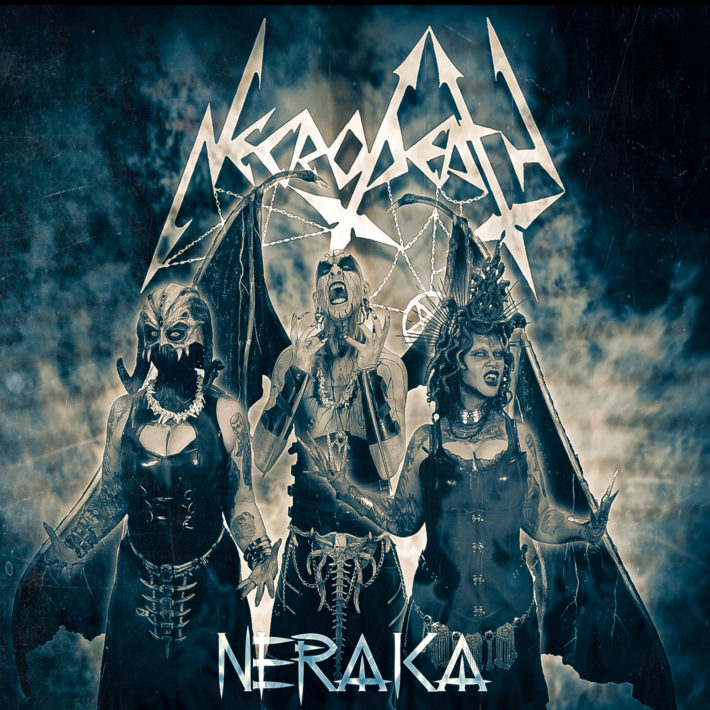 Necrodeath is a band that doesn’t need too much of an introduction: occult-themed black/thrash quartet from Italy, founded in ’85, disbanded in ’90 and regrouped in ’98; one of the first extreme metal band that I discovered – I once snuck out during a school trip to buy one of their album, and now I’m reviewing their latest release!

Anyway, back to serious stuff.
With thirteen studio albums, the latest of which released only last year, Necrodeath doesn’t simply stays back, so here we are again, with an EP; the band’s second one, as Necrodeath had already released an EP in 2015.
“Neraka”, this is how it’s titled, is made up for five tracks: three new songs, a live recording and a cover.

The first song is “Inferno” which, after a long instrumental intro, alternates fast verses with slower bits – keep this in mind, as it’s some sort of Necrodeath trademark. Just like the evil, nasty feeling permeating every song.
Then there’s “Petrify” immediately kicking off, fast, palm-muted and full of energy that violently hits the listener; this song too has slower parts among the others, but they are always sustained by the drums so that the atmosphere never really relaxes. It might just be my favorite song off the whole EP.
“Succubus Rises”, then, is your classic blackened thrash song. It’s fast, with an almost persistent double-bass and a guitar sometimes lead sometimes rhythm, working along the bass to create, again, that evil atmosphere. The drumming really stands out here, and how the drummer uses all the parts of his kit to enrich the song.
The next song is a live recording of the 1999 song “Flames of Malignance”. It’s not bad, it doesn’t add much to the song itself but it does offers a sort of alternate version of the band: rawer and more direct. Less malicious, more brutal. The mixing, however, sounds a bit flat; the other songs have a hi-fi-yet-raw kind of mix, but this one doesn’t really deliver the same energy, which is a problem when the song is a live recording, especially of a band famous for its live performances.
The last song is “California Über Alles”: a blackened thrash cover song of a punk rock classic, originally sung by Dead Kennedys in 1979. And it does sound evil. Evil, and wicked – totally the opposite of the original, sarcastically playful intonation of Jello Biafra. This is not Hell’s own TV ad, this is what you hear when you are with both feet already in it. Unexpected but great – and watch out for the bridge.

Overall, while this release might not be too original in its songs, it’s very well made; the songs are all carefully crafted and do not sound like B-sides at all. It is enjoyable and I found myself “returning” to this release many times, because, simply put, I really liked it: there’s great guitar-bass synergy, the drum work has a unique tone to it (like really, I need to investigate Peso’s kit because whatever he uses I want it too), and the voice… Flegias’s voice is probably the most recognizable feature of the band; there’s sort of viciousness, filthiness to it. Evil and nasty, I’ve said it.

So, to sum up, while not unmissable, this release is 100% classic Necrodeath, and will probably satisfy both newer and older fans.