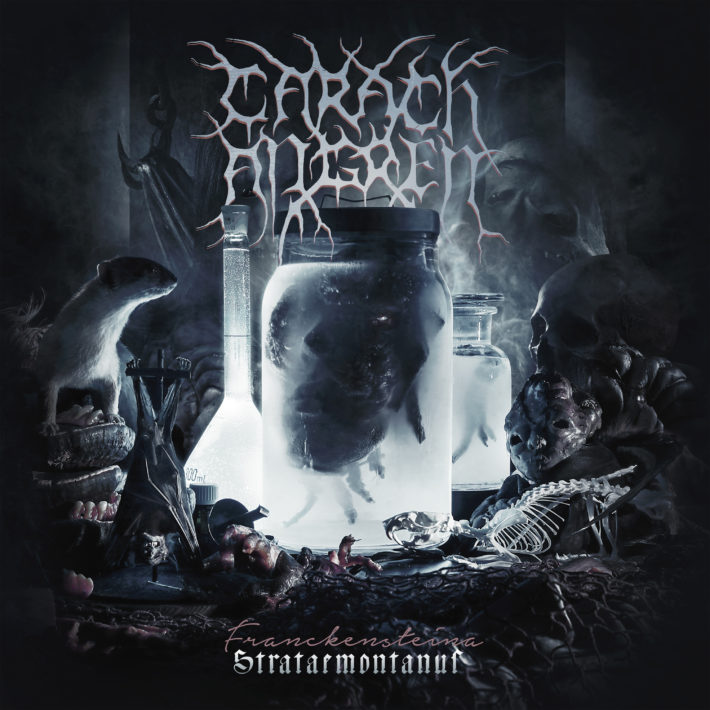 About three years after their previous release, the Dutch symphonic black metal band Carach Angren have released their sixth studio album, called Frackensteina Strataemontanus. The months leading up to the release, they hit a few speed bumps: in February of this year, drummer Namtar decided to leave the band, and due to Covid-19, they had to release their album a month later than originally planned, but nonetheless, they managed to finally put out the record last Friday.

Carach Angren was founded back in 2003, and with their debut album released in 2008, they quickly gained a reputation within the genre. They’re known for their great compositional skills, blending black metal riffs and blast beats with symphonic elements to create haunting melodic sceneries. On top of that, they’re very skilled storytellers, telling horribly morbid tales, most of which are based on real events, combined with some imagination. All their albums are concept albums, about ghost captains, dead lovers, war horrors or even fairy tales. Their latest album is about the real-life Conrad Dippel, on which Mary Shelly based her novel Frankenstein.

The record starts off with Here in German Woodland, which is almost a happy intro, with piano and a choir, over which someone describes a beautiful day in the forest. However, it would not be Carach Angren if this positive atmosphere wouldn’t quickly turn dark, both musically as well as lyrically, and build up to the first full song, Scourged Ghoul Undead. The song has raging guitars, heavy drums, and harsh grunts, with strings and brass instruments in the background, composed in a way that especially reminds of the band’s older stuff. The title song, which comes next, is an especially catchy one. The track starts with a few dissonant piano chords that repeat throughout the song, and in combination with the relatively simple drum beat, it’s a great headbanger (and it’s even nice to sing along to). After another really catchy song with rhythmic riffs and piano interludes, it’s time for Sewn for Solitude. The track starts with something comparable to a violin sonata by Vivaldi, played over some very intense blast beats, and after a little while, Seregor joins in with his snarling grunts. After a chorus that will probably work really well in a live setting (once we’ll be able to go to concerts again), there’s a dramatic interlude, with brass instruments accompanying the doctor who’s contemplating his monster’s crude acts. The song is a clear example of how diverse the record is. Lyrically, because the band narrates the story from various perspectives, like the monster itself and its creator, but also musically, for there’s no 30 seconds where the music has the same structure, yet all parts flow into each other smoothly.

Operation Compass was the third single to be released before the full album. The main riff is a powerful combination of guitars, blast beats and brass instruments, giving the song a bombastic sound. Again, the music aptly accompanies and reinforces the storytelling: about halfway through the song, after “the last man standing falls to his knees,” the black metal riffs get replaced by a more symphonic interlude, after which the intensity of the music matches the intensity of the story. Der Vampir von Nürnberg, another one of the singles, is one of the more grotesque stories on the record. It’s about a necrophiliac, cannibalistic vampire that would visit morgues and do all kinds of things to the corpses, all described very explicitly by the band, even from the perspective of the vampire. After another well-written track, it’s time for the album’s finale, Like a Conscious Parasite I Roam. It starts with an almost magical piano intro, slowly building up with more and more orchestral instruments, making the music more and more grand, progressing into a perfect mix between symphonic elements and black metal. For over eight minutes, the music keeps evolving, making for a monumental ending of a monumental record.

In short, Franckensteina Strataemontanus is a tremendous record in which Carach Angren showcases all their talent. Musically, they very aptly combine symphonic and black metal aspects into haunting soundscapes, and the compositions reinforce the already great storytelling. Almost every song would work very well on its own, with a few ‘simpler’, but very catchy tracks and a few more complicated tracks, but together, all songs create a coherent whole. They’ve proved that they’re still full of refreshing stories, as well as the soundscapes to accompany them. If you haven’t checked them out yet, please do so, for this album will definitely leave an impact.