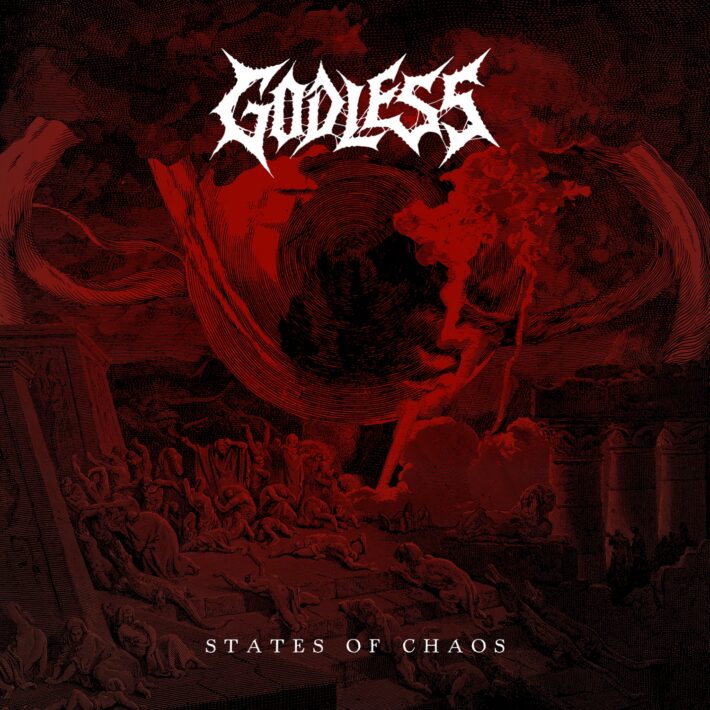 I want to be fair. I want to remember the humans behind the record, and I want to remember their love and effort that had to go into creating a metal record. This doesn’t mean being overly nice and fawning to records that I can’t stand, it just means that I try not to be an asshole or assume anything about a record’s creators and to meet any record I review on its own terms. Those terms caused a problem with writing about States Of Chaos. This wasn’t a terrible record. Every track just completely vanished from my head the moment the record ended. Calling a record “completely forgettable” has some negative connotations that can’t be fairly ascribed to States Of Chaos, but not using those words would mis-represent the listening experience entirely.

States Of Chaos is the debut record by Indian death metal band Godless. The band plays fast, thrash-infused death metal that contains plenty of tasty melodies without entering the world of melodeath. Thinka lighter, slower Nile with cleaner production and less thematic fascination, or Cannibal Corpse without the gore and with extra caffeine.

States Of Chaos starts off with a wild distorted guitar adventure. The lead guitarist goes down whatever path he feels like,caring less about structure and sense and more about creating a new level of wilderness, and then the album proper starts. That’s a hell of an opening statement, and it’s one that the band unfortunately didn’t effectively follow up. From there, opener “Malevolent” turns into a standard death metal track, with appropriately memorable riffage, choruses that sound pleasant in the moment but that I can’t remember by the time the next track begins, and drumming that remains the same throughout the rest of time. Joy.

Godless never sounds bad, and I felt that I walked on solid ground all throughout States Of Chaos. Massive mistakes stick to the mind like silly putty on a suit jacket, and there’s none of that here. The band even gifts an interlude with only the third track, which I would usually love to complain about. It’s not bad enough to stand out. Just a minute of wasted space that gets erased from my mind as soon as it ends, just like the choruses on the first track, just like the entirety of the second track, just like the rest of the album.

So why did I find it so difficult to remember anything about this record? The drumming patterns are simple enough that nothing stands out, the riffs and breakdowns feel the same from track to track, the guitarist’s whammy bar adventure returns for solos, the vocals have a standard boilerplate death metal growl. The band has effective songwriting tricks, they just used all of them on every song. Every track swirled together in a bubbling cauldron and then boiled off into nothing.

With all of that complaining out of the way, Godless do an effective job of selling death metal. They create the right amount of energy. I never found them in their own way, and I never wished a track was shorter. Despite the lovecraftian memory erasure spell that Godless cast over me, I walked away with a pleasant, if foggy, feeling after every listen. And although I’ve said this already, I’ll repeat it in a positive light now: The band has effective songwriting tricks. I like those whammy bar adventures.

You won’t hate States Of Chaos, even if you can remember it. Godless have made a solid first impression, and the future is open for them. You’ll like States Of Chaos if you want fun death metal that stays true to itself. I’ll swing by for the next release, but my time with States Of Chaos is done.