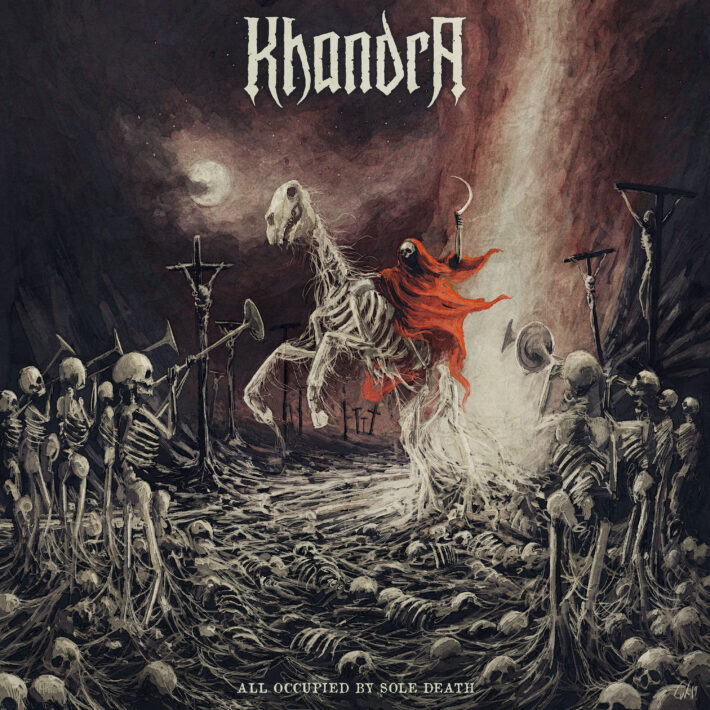 I don’t know if black metal bands outnumber all other subgenres put together or not, but it sure seems like it. Maybe the nature of their music and general aesthetic makes the style seem easier, causing more beginners to flock to the corpse paint in hopes it isn’t more difficult than it looks (it is). In any case, the abundance of black metal bands makes it harder for the good ones to stand out from the crowd, doubly so if the band doesn’t have their gimmick or innovation to draw eyes. Khandra’s best chance is simply to outwrite their competition.

All Occupied By Sole Death is the debut full-length release by Belarusian black metal band Khandra. Khandra play with the classic, standard second-wave black metal sound, but with more updated production, cleaner song-writing, and hopefully less murder. They use dissonance in their melodies, but in a way where the focus is on the melody.

When all else fails, metal bands fall back on the riffs. Khandra don’t break this mold. Luckily, very rarely on All Occupied By Sole Death does all else fail, meaning that the riffs at the core of Khandra’s sound create head-bobbing moments rather than begrudging silver linings. From the first proper track on, Khandra’s guitars lead the band through icy and desolate landscapes. Low energy and depression sink through the album, creating a sense of weariness even during the height of the tracks. Khandra make it work, stripping down the hectic sound that can doom black metal bands to give the listener no choice but to pay attention to their well-written and well-played riffs. This could have gone very wrong. Instead, Khandra prove that they play with emotional precision and direct the listener’s attention at will.

Repetition can kill black metal albums, but when the high tremolo kicks in, Khandra don’t stay on it for long. Riffs repeat so that the listener can appreciate them, but not for longer. Despite the dark nature of All Occupied By Sole Death, this record sounds outright fun at times. This doesn’t sound like a young band, it sounds like a band who have the expertise of time. Their melodies linger on one note to clean the air out, but rip through intriguing melodic lines when it’s time for the music to feel fun. Khandra always seem to know the right note to play at the right time.

Or rather, they mostly do. There are some flaws with the songwriting that stick out due to the excellent nature of the melodies. First, the intro track. “Mute Moleben” lasts too long, sounds useless, and provides nothing of value. Even though it’s easily skippable, it still starts All Occupied By Sole Death with a bad impression. The tracks also last longer than they need to. This is a forgivable offense due to the excellent melodies, but it begins to wear after repeat listens.

The ultimate sin of Khandra is that they don’t do enough to separate them from the crowd. The promo material calls out Mgla and Blaze of Perdition as similar acts, but there are plenty of other bands that could have fit in those slots instead. This is apparently supposed to be dissonant black metal, but not in the Dodecahedron sense. Instead, the melodic elements of this dissonant group save it. They created a “dark and cold work of art” according to the band’s blurb. They do a fine job of it, but fine is where the story ends. In a year, I won’t even be able to differentiate this from all of the other above-mediocre black metal records that I’ve reviewed in the past few years, let alone all that have been released. Khandra’s melodies are surprisingly good, but not good enough to make this an album to return to.

Still, All Occupied By Sole Death is a fine album. If you’re looking for a record where even the dissonance sings an entrancing melody, maybe Khandra are for you. If you’re sick of black metal after this last year and only want the absolute best, this won’t satisfy you. Even though this record won’t stick out as the best of the year, it is as enjoyable as any similar black metal record.