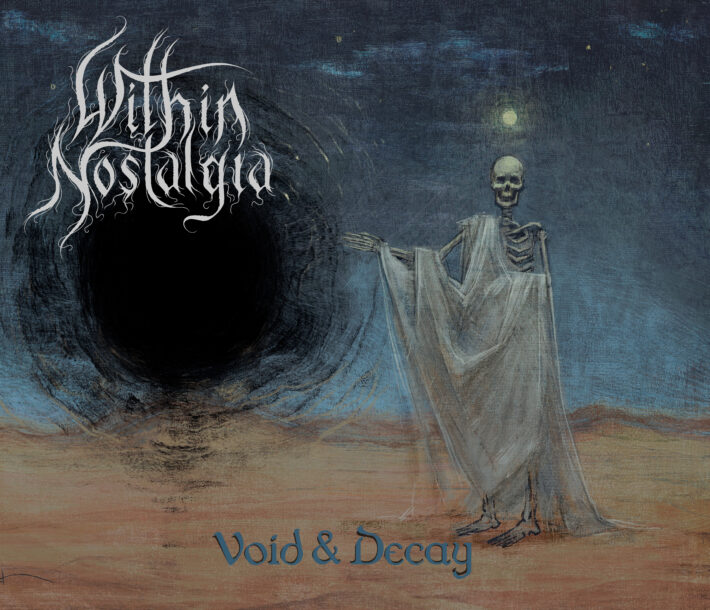 For my final review of 2020 (with many more to follow in 2021), I was hoping to find an album that would blow me away.  Some hidden gem that I would have had no other way of discovering, and shattering any expectations I might have had.  Unfortunately, Within Nostalgia did not do that for me.

When I received the promo email and it stated that this album was “for fans of Woods of Ypres, Agalloch, My Dying Bride…” I found myself getting a little excited.  As with many listeners around the world, I am love the atmosphere created by these bands, and anything that follows that direction always piques my interest.  Due to the very nature of this year and some personal life events, I haven’t had much time to go exploring the eclectic depths of the metal underground, and barely kept up with major releases alone.  I say all this to show that my criticisms of this album are not from a place of ignorance or unfamiliarity.  I tend to give albums the benefit of the doubt when it comes to reviewing them, and this one is no exception.  But it still didn’t deliver on what I wanted.

Starting with the more positive aspects of this album, the bands of use of melody is well utilized.  I’m specifically talking about that tremolo/blackened melody often found on atmospheric and post-black metal records.  Specifically things like what comes after the intro in “BackLight” or the main theme in “Desideratum.”  I was initially caught off guard with how catchy the first two tracks were.  The first few notes of “City of Nameless Faces” initially had me expecting a moody, atmospheric album; something akin to Numenorean.  However, when the verse came in, I had to do a double take because I thought I time-travelled to 1995.  I can’t say with any certainty that it “worked” per se, but it certainly piqued my interest.  The following track, “Beneath Unworthy Presence,” does a similar thing; contrasting this doomy/atmospheric sound with  (what I consider) something from left field.

The following three tracks don’t break the mold as much as the first two.  Maybe that’s because the surprise is out of the way, and I’ve had a better idea of what to expect.  But this isn’t really my main issue with album.  I feel bad boiling it down to a single element, but the vocal performance on this record is…it’s not great.  Mainly the harsh vocals.  I don’t know if it’s something that could have been fixed in production (applying varying FX and whatnot), but it sounds lifeless and thin.  With the music on this album, I expected something like a tortured wail, or a haunting growl, but that kind of personality wasn’t there.  The clean vocals are a little easier to stomach, but not by much.  I feel that I might have enjoyed the songs better if they were purely instrumental, but when the vocals come in, it becomes all that I hear.

When I finished my initial listen of the album, I realized that it didn’t really stick with me or capture my attention.  Sure, there were moments that were intriguing; like finding a unique tree in the middle of a long road trip.  But I only came back to it for the sake of the review.  I didn’t keep listening to it because it pulled me back.  At the end of the day, that is my baseline criteria for an album, and this didn’t really meet it.

Marrowfields - Metamorphoses Review
Significant Point - Into The Storm Review
Obituary - Cause of Death: 30th Anniversary
Rituals of the Dead Hand - With Hoof and Horn Review