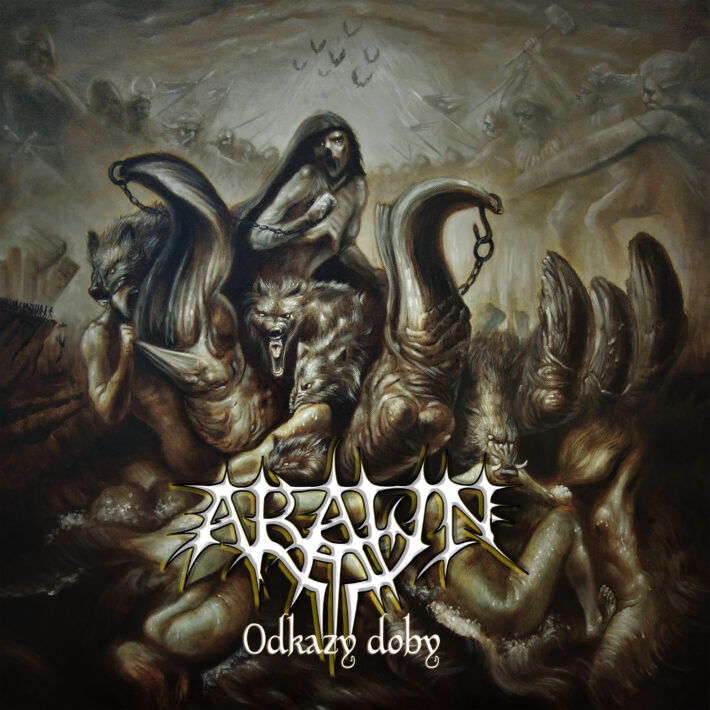 If you haven’t been paying attention to the news recently, there’s been a bit of a disease going around. This has severely derailed a lot of people’s holiday plans, not to mention the year in general. The music industry specifically has faced some difficult decisions. Tours have gotten cancelled, venues are hanging off the side of a cliff with one finger gripping the dirt, bands have decided to retire, and album release dates have been pushed back to allow for a better rollout. In the resulting void, some bands who would otherwise go unnoticed decide to take their chance while the pickings are sparser than usual. If millions of people dying results in you picking up some new bands that would have remained undiscovered in a normal year, then the size of the storm cloud doesn’t change the need for the silver lining. Arawn could be one of those bands.

Arawn are a young Czech death metal band set to release their second album, Odkazy Doby. Their sound lies on the cleaner side of death metal, drawing more from Dark Tranquility than the current cavernous craze that has infected the genre. You will also find no elements of technical virtuosity or progressive experimenting from this group of musicians. There is, however, a thrash undercurrent to the band’s sound, leading to a frantic feeling that can be absent from modern death metal. Apparently Odkazy Doby’s recording and release time got mixed around by the pandemic, and this may have been a blessing and a curse for the un-established band.

Adding the “melodic” genre tag to an album occasionally conjures worries of doomy brooding, but nothing of the sort resides in Odkazy Doby. These concise tracks push forward through the gloom of winter, lit with fire and malice. Everything trips and falls forward. If Arawn had lingered too long on any individual song, this could have blunted their effect. They instead kept every track, and the album as a whole, short enough to leave nothing but fond memories once the record finishes. Even the mid-paced moments, such as the Perfect Strangers-mimicking passage at around the three minute mark in “Pohan,” add to a feeling of perpetual motion, as they allow the air to clear for just a moment before the band gets right back into it.

The production job on Odkazy Doby sounds amazing. Everything comes through clear and has bite. This is one of those albums where every instrument can be focused on as the listener wishes, and feels like it can be isolated from the band. At the same time, all of the sounds mesh well together, and the record captures the feel of a band rocking out in a garage together. A garage with great acoustics, I guess.

Despite that production, the singing feels a little off. It’s not bad, rather it feels slightly out of sync with the style the rest of the bad has, as if it was transported from a different melodic death metal album. Occasionally the singer will try for effects, such as laughing or changing his range up, and this does not help at all. This isn’t a big deal, but it stands out in an otherwise well-sounding package.

Unfortunately, Arawn seems to run out of ideas halfway through the album. Passages feel like they repeat, and songs blend together. I don’t mind a whole lot because they keep the energy up, but at times this feels more like listening to a 20 minute EP twice in a row than listening to a full release. I don’t know if this comes about due to a formulaic writing process, the band’s timelines and plans getting derailed due to the pandemic, or what, but Arawn don’t really travel out of their comfort zone here. Additionally, nothing really stands out on its own. A feeling of pole-vaulting over a pit of spikes in a burning forest vaguely surrounds the album, but stare closer and that feeling disappears like a magic eye puzzle while wearing an eye patch. No individual riff, song, or phrase on Odkazy Doby feels like it earns the excitement that the band members and production team have given the release.

Still, this was an enjoyable album. Put it in the background as you do something else, and you’ll find yourself dancing. You’ll find yourself wishing you could listen to it again as the day flies past you. Don’t listen too closely or you might shatter the illusion. In the right circumstances, Odkazy Doby is plain, blinding fun.