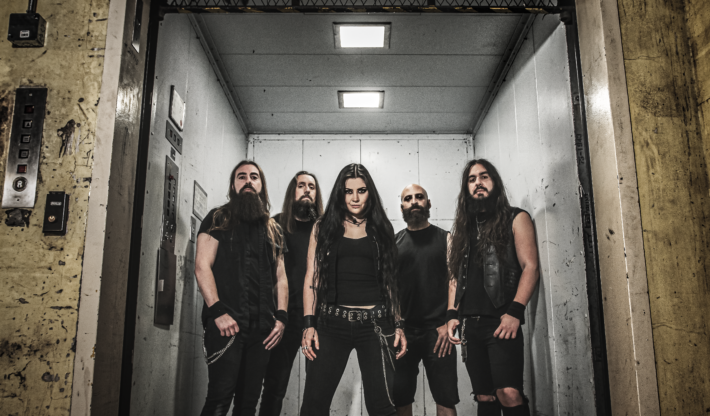 Hailing from Hamilton, Ontario, Lutharo is an incredible melodic death metal band ready to take the world by storm with their debut album. Near the days of its publication, I had a chat with the band.

Hello, Rick here! Who am I talking to?

Hiraeth is your very first album, after seven years as a band and three EPs. Why did you wait all these years for an album, and what prompted you to release it right now?

Up until this past year we didn’t have much time to work on a full length. We’ve had so many issues with lineup changes and just general bad luck that it’s been easier to just put out EPs. However this time with the pandemic, we had all the time in the world to write so we cracked down and wrote a full length album.

We were writing and evolving at such a fast pace that there was no reason to keep any older music. We had plenty of new stuff to choose from.

As you’ve said, Hiraeth takes more risks than your previous work Wings Of Agony and it shows a more unique, defined sound; was it easy to decide to take the next step? How does a band decide which direction to go next?

Honestly we never sat there and planned where we were going to take the album. Every song sounds very different for a reason and that reason being we just let the music guide us. We have found this method to be the most organic and had all the time in the world to just let everything flow.

This album has ten songs, and it ends with the majestic, seven-minutes-long ending song – which is one of the three singles too! Why did you pick these particular tunes? I have to say, I enjoyed how you chose the first song, one from the very middle, and the final one.

Thank you! We knew Lost in a Soul was going to be our first single because during the writing process it was just so epic sounding and really stood out to us the most. For To Kill or To Crave we all just collectively loved that song and thought it showcased all of our best parts as musicians. Lastly, Hopeless Abandonment wasn’t even supposed to be on the album. This was a last minute addition and we fell in love with it so much that we had to make it a single. This is also my favourite song on the album.

Your sound is an awesome mix of power, heavy, thrash and death metal – calling it melodic death metal feels reductive to say the least. Who and what do you look at, when writing music? How do you decide which elements are to be thrown into the mix?

There really isn’t a specific decision making process. All of us have different tastes in music and very broad ones as well, so it’s easy to just throw a bunch of different sounds into our songs. We also all write the songs together so every band member has their own two cents thrown in.

A topic of discussion that often comes up when talking about metal music nowadays is the “female-fronted” label, which many consider to be useless because it lumps together a bunch of bands that have nothing in common other than the singer’s gender, while completely disregarding these bands’ music – which obviously should be the focus instead. What is your opinion on this?

I honestly couldn’t have said it better myself.

Additionally, how do you think the metal scene is, for a woman fronting a band? Is the metal world still very much a “boys’ club” or is it more open? What are some things you think still needs to change?

Things have changed a lot from when Lutharo started until now. People are very open but you do get the odd person who doesn’t regard you as part of the band and assumes you’re there to do merch. There’s a few things that still need to change but that’s far too much to write about.

Finally, this is a common question that I try to avoid but sometimes curiosity gets the best of me: both “Lutharo” (or “Lutharö”) and “Hiraeth” are odd words to say the least! Where do they come from, and why did you choose them?

“Lutharo” is an elvish word meaning “the enchanter”. We chose this because we love “Lord of the Rings” and thought an elvish word would be cool. “Hiraeth” was chosen when I was browsing the internet one day and came across it. It just summed up the album so perfectly we had to use it. The meaning for the word itself is very broad and it’s more of a feeling than something you can put into words. Definitions that are written up about it though are: A deep yearning for a place or home that may have existed, never will exist or is out of this universe of existence. It is also felt as homesickness or nostalgia.

Thanks a lot to everyone in Lutharo for this interview! Their incredible album Hiraeth is out now and it can be bought on Bandcamp. Don’t miss on any new info about this band and follow them on Facebook and Twitter.