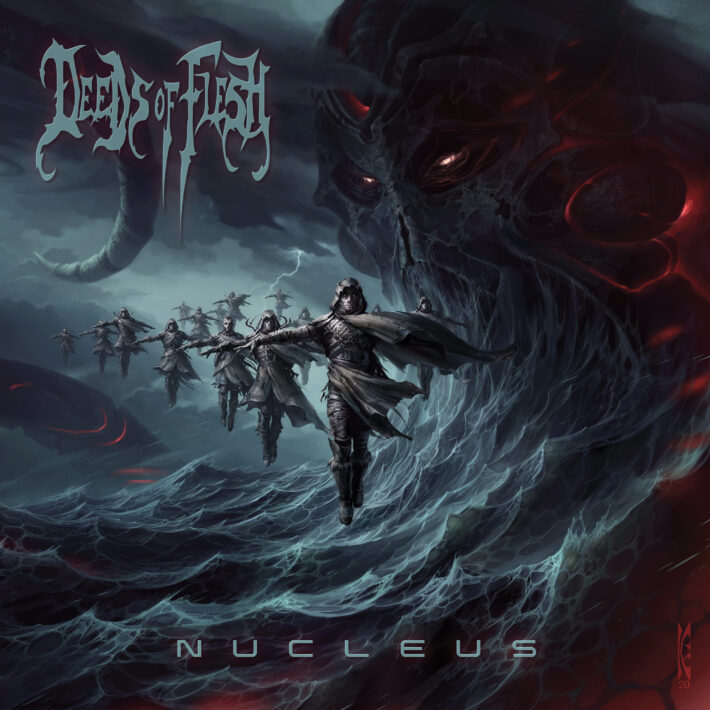 The end of the year has produced some great death metal albums. Last week we got a new Undergang album and a new Depravity album, both of which I have thoroughly enjoyed so far. Last month, Omnivortex, Countless Skies, and Of Feather And Bone, among others, all made great contributions to the genre. But I’m a glutton. Deeds of Flesh have their say this week, hoping to exceed all of those other releases with their ninth album Nucleus. I hope they do as well.

Deeds of Flesh play a straightforward variety of technical/brutal death metal. For those of you who don’t know, this band was headed by Erik Lindmark from their inception until he passed away in 2018. He apparently wrote some of the music and played some of the guitars before his passing, although he did not handle the vocals, which went back to Jacob Kingston for this album. But Kingston isn’t alone. An absurd number of guest vocalists have hopped on board Nucleus, included but not limited to members of Decrepit Birth, Cannibal Corpse, Gorguts, Dying Fetus, and Suffocation. Additionally, this album marks the conclusion of a three-album long story arc from the band. In summary, this is a semi-tribute album to a deceased former bandmate featuring guest appearances from some of the biggest names of the genre and holding an important place in the band’s discography. Oh, it’s also the band’s first album in seven years. That’s a lot of weight to hold.

Underneath all of that weight, Deeds of Flesh never buckles. Right from the first listen, the album’s consistency undeniably shines. There are no bad tracks on Nucleus. That consistency bleeds through to everything about the record: There are no standout instruments or performances, instead everything works together to create a cohesive whole, and no instrument or vocalist really hogs the spotlight. That is borderline remarkable considering the band’s history and the album’s number of contributors.

Deeds of Flesh have been around for a while, and it shows in their songwriting. They know exactly when to switch it up. As soon as I am about to get bored with a section, everything changes. Constant, robotic drumming can be a failure of this genre, but they change their rhythms and tempos enough within individual tracks to avoid that issue. Again, nothing too glamorous. There are no dazzling moments that stand above the muck of the album as a testament to the insane. But every track remains interesting at a minimum, at all times. I never found myself bored with Nucleus, or even wishing that I was listening to one of the other seventy-five excellent releases in the genre from the past few months. Nucleus didn’t always captivate, but it did always entertain.

And what more can you ask from music than being entertained? Unfortunately, quite a lot. It’s relieving that Nucleus lasts a relatively brief forty minutes. The production may not have been able to handle a longer album. Nucleus doesn’t sound bad, everything is clear and there is a definite death metal sound to the album, but it verges on being tiring. Fatigue and stagnation may set in for some listeners. Additionally, although this feels like a very good death metal album, it doesn’t feel like a great one. Not everything has to be great, but I wonder how much I will feel the need to return to this as time goes on. As I have stated, Nucleus is consistent. No less, and no more.

Nucleus feels like an album that needs to be good due to its circumstances, and it is. I left this release absolutely satisfied every time I put it on. This won’t be my favorite death metal album of the year, or probably even of the month, but it is still a fine record that you should check out if you are at all interested in the genre.