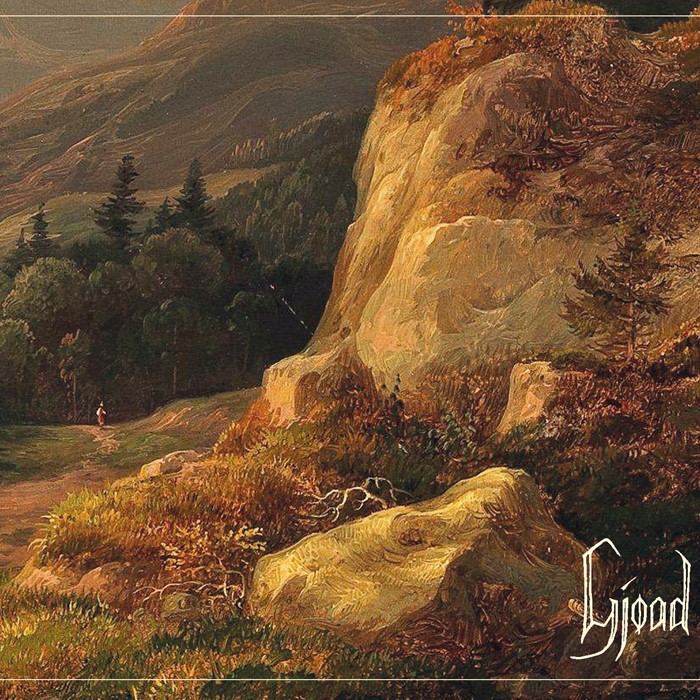 As we’re nearing the shortest day of the year and many people attempt to escape the dark, cold weather, it’s always nice when you come across an album that suits your escapist needs. Gjoad’s debut full-length Samanōn does exactly that. Hailing from Austria, the band creates a kind of folky ambient post-rock/post-metal. Whereas a cool album cover is never a guarantee that the music will be equally interesting, in this case it is. The Romantic painting of a mountain landscape, with a tiny person walking through the valley, is exactly the scenery that the music evokes in the listener. The tribal percussion, sounds of nature, and woodwinds, in combination with clean guitars, work together really well in order to achieve this musical imagery. The album’s structure is quite interesting as well. Often, atmospheric/ambient records start off with a number of shorter songs that build up towards a longer, final track, but with Samanōn, it’s the other way around. The record starts with a fourteen-minute track, after which a few shorter songs create new atmospheres.

In Rouh, the opening track, the ambient soundscapes slowly unfold. There’s soft pads to be heard, and each note is a paint stroke in the harmonic painting that Gjoad creates. Subtly, guitars join in, playing very scarcely and softly at first, but every time more prominently. After a few minutes, the first chord on guitar is played, with deep, tribal drums accentuating each chord and its aftermath. The music is far from hurried, instead, Gjoad makes sure each chord ‘lands’, before playing the next one. The music reminds of Schammasch’ atmospheric works, both musically as well as in the mix. After about five minutes, there’s consistent strumming in the guitar. The percussion, in combination with some kind of tribal flute, and even some low-pitched chanting, give you a feeling as if you were sitting around a campfire, attending some kind of ancient ritual. While the musical themes and instrumentation slowly change, it’s the percussion that functions as a connecting thread over the course of the whole track. Near the end, the guitars get more distorted, and the tribal percussion gets replaced with an actual drum kit, showing the (black) metal influences in Gjoad’s music. If you’re looking for black metal, however, you should probably look further, because the intensity quickly dials down to the level of the rest of the record.

On the second track, Peraht, the music is built up similarly to the first track. It starts off with a really soft theme on guitar and some stray cymbal sounds, until, especially using the drums, more and more structure is brought into the music. The music builds up gradually, without you noticing how much it actually changes over the course of the track. Gartsang is the shortest song on the album. It starts with a guitar motif over a simple drum beat and some sounds of thunder in the background. Then, there’s spoken word in what seems to be some kind of old Germanic accent. This really adds to the escapist vibe of the record. In Hagazussa, there’s a more prominent lead guitar, which is overdriven to some extent. The percussion plays an important role in creating the flow of the music, working together really well with the other instruments. The album’s final track, Untar, is mostly ambient. Its soundscape is built up with synth pads, after which tribal percussion and a tremolo guitar add rhythm and melody to the soundscape. Near the end, the music fades out, giving you the chance to stay in the ambience of the record, even after it finished.

In conclusion, Samanōn is a well-composed ambient record, perfectly suiting your escapist needs in these dark times. Every aspect of the music contributes to the beautiful scenery that the album brings about. If you’re used to listening to black metal, you might be disappointed to hear that Gjoad is mostly ambient, but if you know what to expect, the album’s sure to leave a deep impression.