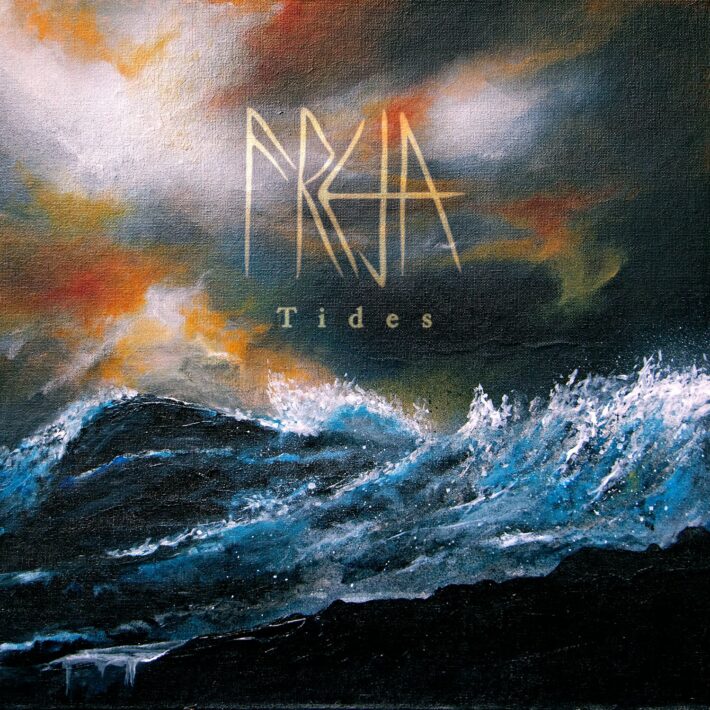 “Thundering sounds and ethereal atmospheres. Surrender yourself to the ebb and flow of life.”

This is the motto of atmospheric black metal band Freja. Their debut album, Tides (which will be released this Friday, April 22nd), shows that they practice what they preach, for ebb and flow are expressed in various aspects of the music.

In earlier reviews, I’ve said that the Dutch black metal scene is a scene that keeps growing and keeps renewing itself. Sometimes, new bands seem to appear out of thin air, and other times, members from existing bands join forces and merge into new bands. Such is the case with Freja: together with a number of people from various Dutch black metal bands, C. (from Witte Wieven) and W. (from Laster and Verval) worked together on a project called “Maalstroom” for Roadburn 2019 (it was a commissioned piece for the festival). C. and W. found each other musically during that period and they decided to form a new band. The duo makes atmospheric black metal with a unique blend of both of their musical backgrounds.

The album starts explosively. The blast beats and tremolo picking at the beginning of “Our Chosen Path” let the listener know that Freja doesn’t beat around the bush. Within the distorted guitars, though, subtle melodies are hidden that lift a corner of the veil of Freja’s melodic side. W.’s deep, guttural grunts remind of Amon Amarth’s earlier records, when they still had a rawer sound with black metal influences. These grunts are complemented by C.’s siren-like clean vocals, and together they create an intriguing balance between raw and enchanting vocals. A few minutes into the album, the blast beats get substituted by a slower drum rhythm and the guitars also become less intense. Floating on the waves of the rhythm guitars, C’s vocals and delicate clean guitar melodies create a mysterious atmosphere.

Overall, the music is captivating: the main drum patterns are generally easy to follow, while the fills and variations keep them interesting. The melody in the rhythm and lead guitars guide you along the foundation laid by the drums. Over the course of the record, the vocal parts show even more variety than on the opening track: it’s not just male grunts and female clean vocals, but also the other way around. These different types of vocals are combined in various ways, in accordance with (or in contrast to) the instruments. Something else that contributes to captivating the listener is the fact that the music keeps evolving. The tracks’ main motifs show small alterations over time, and changes in instrumentation gradually change the ambience of the music. This way, Freja really tells a story: they translate the ebb and flow of life into music. A clear example of this, for instance, is the fluctuating energy on the record: intense black metal passages alternate with more tranquil, atmospheric parts. Another aspect of the music that changes over time are the emotions that are expressed in the music. Whereas a large portion of the record has a melancholic atmosphere, there’s also parts that express rejoice. An example of this is “Dusk”, which starts off with a positive feeling that’s expressed by the use of major chords and consonant, high-pitched clean guitar. About halfway through the song, though, the composition evokes a more disconcerting feeling with the listener, showing that no emotion is permanent.

The tracks function really well individually, but they also work well in relation to each other. For example, “Of Those Stricken by Fate”, the album’s second-to-last track, can be considered as a kind of interlude in preparation of the record’s finale. As an individual track, it paints a rather tranquil, atmospheric soundscape, but in the context of the record, it gives the listener a moment of relaxation before the music explodes into “Cloaks of Valor”, the album’s finale. This is yet another beautiful example of how Freja expresses the theme of ebb and flow into their music.

In short, Tides is an impressive debut with a unique sound. With so many atmospheric black metal bands that release music these days, new bands need something special to stand out, and with their intricate compositions, captivating soundscapes, and unique vocals, Freja makes sure they do. So if you’re looking to get caught up in an album that’s as daunting as it is enchanting, you should definitely give Tides a listen.