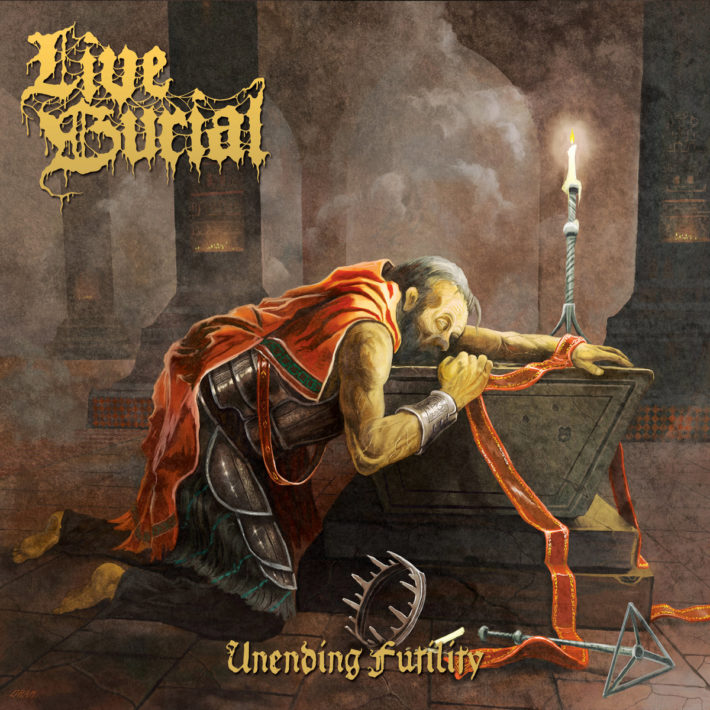 One of the more bizarre developments in mathematics is the discovery that there are multiple different sizes of infinity. There is one type of infinity that is known as “countable infinity.” This is what you get by adding up all of the whole numbers: 1+2+3+4, and so on, forever. You’ll notice that there are gaps in there, 1.5, for example, is not included. “Uncountable infinity,” then, is a larger form of infinity that involves all of the real numbers: for example, the set of every real number between 0 and 1 is uncountably infinite because you can always add more decimal places. It is continuous. I bring this up partially because it is interesting to me, but also partially because it is necessary knowledge to have as you try to grasp how many times the members of Live Burial must have listened to Leprosy growing up.

From the opening distorted chords of Unending Futility, you can tell that every single member of Live Burial has gone through Scream Bloody Gore and the rest of the death metal holy scriptures more than can be healthy. The slow chords, creating a dark and unsettling atmosphere that stretched things to the slower limit of death metal before ending and leading to the main, faster section of the track that starts opener “Seeping into the Earth” is a too-close-for-comfort copy of the opening of “Infernal Death.” This gets incorporated into the rest of the track, and they return to it a few times. “Seeping into the Earth” doesn’t speed up as much or have the same energy as its parent, but the effect is the same. Sometimes it feels like the actual notes are the same as well. If you’re going to rip off an older band, Death is a good choice I guess.

Throughout Unending Futility, the aggressive drumming is a plus, the vocals sound fantastic, and the strings compliment each other beautifully.  Live Burial has a tendency to lean on a walking bass line underscoring much slower guitar melodies. Usually it gets tiring when a band repeatedly leans on their musical crutches, but in this case they never quite get there. The bass lines remained fun and refreshing, partially because bass lines are destroyed and bricked out of existence so often on metal albums (looking at you, Metallica) that actually hearing a good, prominent bass line is almost a form of spiritual healing.

This style of death metal demands that the musicians be constantly tripping forward over the beat, even when playing slow notes. They manage to do so. The aggression, passion, daring, and any other early Florida death metal dogma you wish to put on this checklist are present in abundance. Occasionally Live Burial’s tracks will stay too slow for too long, and this definitely hampers their sound. But, to err is human. Their slow sections aren’t necessarily bad, just a lot to get through at times.

The problem with sticking to a formula created by a pillar of your genre is that it bathes every shortcoming you have in neon light, then forces the listener to stare, unblinking at all of their least-favorite aspects of the formula, Clockwork-Orange-style. Death is one of my favorite bands. A large part of what made them so successful was Chuck Schulinder’s songwriting magic, and as you may have guessed, he didn’t have anything to do with Unending Futility. That’s not to say that the members of Live Burial don’t know how to write death metal, they create some quite enjoyable, memorable, and impressive tracks. However, I couldn’t shake the feeling that this entire album was a collection of Death demos that didn’t quite make the cut. Normally, “Not quite being as good as arguably the best metal band ever” would not be a useful standard to hold a young death metal band to. But it’s unavoidable here. There can be no individual thought patterns with Unending Futility due to absolute rigor with which they follow the paths created by their idols.

In a lot of ways, Unending Futility is symbolic of many problems in the metal world right now: Too many people aping what they know, not enough exploring new ground. That being said, Live Burial do a great job exploring the ground they’ve chosen, and in a lot of ways listening to the sound of Unending Futility is like listening to the sound of perseverance, of a band continuing to keep a tradition alive long past when others have moved on. It’s a worthy endeavor, and one that you should give a chance.