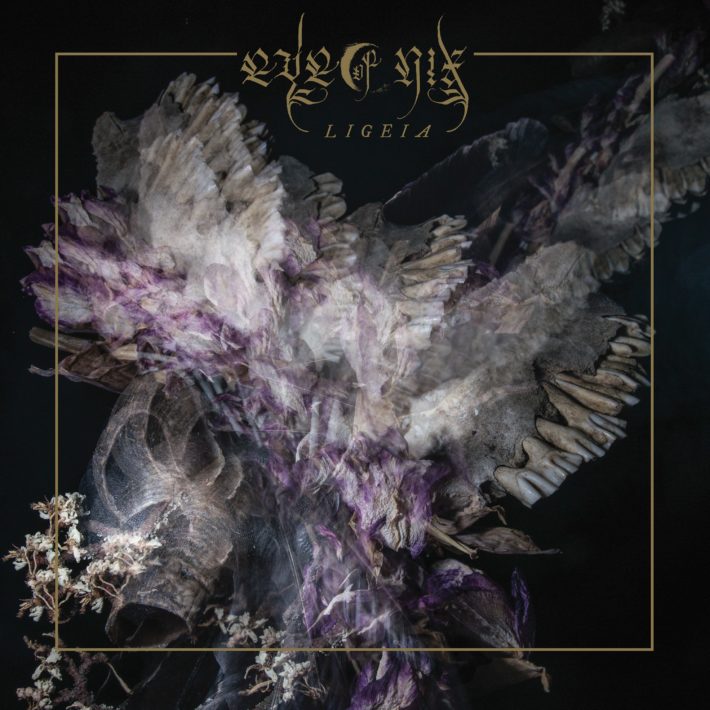 Theme can be an important part of music, but it’s a part that I often skip because it is usually expressed entirely through lyrics. Lots of albums have absolutely no theme at all beyond rocking out, and that’s fine. Not everything needs to be a high concept. Within albums that are bound together by theme, most of them are concept albums. In the opposite corner sits Eye of Nix, an album that attempts to express its theme through the music rather than simply through lyrics. The results are quite intriguing.

Eye of Nix are a Seattle based band that plays a psychedelic, doom-infused form of post-black. They seem to flinch away from traditional song structure, instead letting their sounds drift over a roaming, vague structure that didn’t seem to affect their songwriting process at all. Yes, there are verses and structural elements, but they aren’t the focus. Everything in Ligeia is quite murky. This isn’t the heaviest album, so if you’re looking for brutal, crushing sounds, you will probably be disappointed.

Ligeia is named after an ancient Greek siren, and Eye of Nix evoke the sense of dangerous allure associated with the sirens perfectly. There is beauty in the foreground of the album, as the lead singer and occasional lead guitar provide hypnotizing, soothing melodies that slowly move over a much more dissonant undercurrent. Sometimes these melodic elements are uncomfortable and jarring, sometimes they are simply pleasant. They are expertly written and performed in both cases. For large chunks of Ligeia, the backing sounds to this attractive beauty is a clashing, dissonant mess, and I mean that in the best way possible. The yin-yang-like contrast of the clear melodies and the dissonance underneath drive the album and are what keep the listener engaged. Eye of Nix manages to lean into both their dissonance and their consonance without sacrificing either. This stratifies the sounds of the album, but this is again to their benefit.

Syncopation and time changes can be dangerous tools to use when writing an album, but this is no worry for Eye of Nix. In keeping with their siren theme, the band occasionally use both to give an unsettling feeling to their tracks. When the listener adjusts to these tactics, Eye of Nix instead stretches their sound out, with frantic and uneven drumbeats and repeated guitar chords suddenly finding themselves forming the backbone for long, sustained sounds that lead off into nothingness. The goal seems to be to keep the listener off-kilter. The result is that on later tracks, when some of these things are played straight, the listener is still waiting for something to go wrong. Something lurks in the darkness beneath the siren’s song.

Ligeia is not a perfect album, of course. By the last few songs, this effect starts to wear off, and the songs start to drag as a result. If Ligeia was about ten minutes shorter this would be a much better listening experience. Additionally, this album’s excessive length harms its relistening value. Because the strongest musical effects of Ligeia wear off as the album goes on, the first-time listening experience does not quite fully regenerate. If you listen to Ligeia too often in a short amount of time, burn-out becomes a real concern.

All of the tracks sort of blend together as well. Although this can be a strength for some albums, on Ligeia it contributes to the burnout issue.What is interesting on one track is less interesting on eight. Eye of Nix switches up their musical tools often enough to avoid this issue for a time, but because the core purpose of the music remains the same, they are ultimately just changing the color of the walls in the same house. It’s a pretty great house, but there’s a specific architecture to it and you’re not going to mistake any of it for the house across the street.

Eye of Nix has created a beautiful album that keeps to its theme as well as any album I’ve heard this year. The music is engaging and alluring. There are flaws, as there are with anything, but this is an album that will stick with me for a while. I probably won’t listen to it often, but the times I do will have a lasting impact.