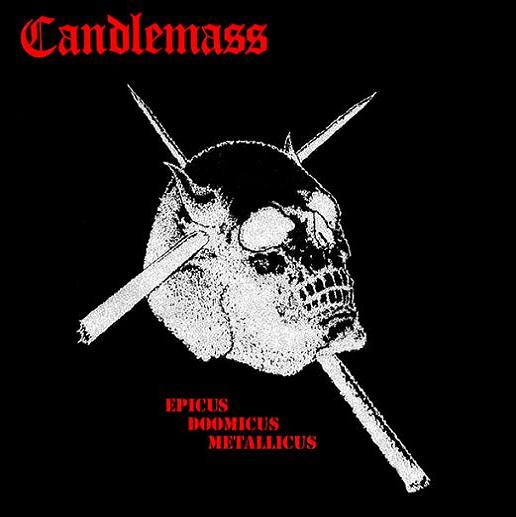 If you don’t know, Candlemass grew the epic doom metal subgenre to the heights of the current day almost instantly with their 1986 debut, Epicus Doomicus Metallicus. This record, despite simultaneously having the best and worst metal album name of all time, has caused quite a ruffle in the metal world, starting a genre and inspiring many worthwhile bands to the present day.

From the start, Black Sabbath’s influence takes up center stage. From the vocal style to the guitar tones, the opening notes betray the huge influence that Black Sabbath has had on the genre. But we wouldn’t be talking about Candlemass decades after their debut if this record simply consisted of Sabbath worship. Epicus Doomicus Metallicus moves far beyond that realm.

The riffs on this record still sound fresh, new, and catchy. Candlemass show a mastery of time, as the record sounds slow and stretched out, but never drags. The riffs take up as much time as possible, but never too much. Epicus Doomicus Metallicus simply sounds heavy in a way that many Sabbath disciples never manage to achieve. Without these monster riffs, this release may have still seen success, but it wouldn’t have had the absurd influence that it has enjoyed. Good riffs build the bones of every metal record that has stood the test of time, and Candlemass have as good of a claim to elder statesman status as almost any band.

But it’s not just the riffs. You don’t know this as a Sabbathian record, or as a doom metal record. This is Epic Doom. Candlemass took this sound to absurd extremes where no one else, including Sabbath, had gone. Every single note brings drama. Every song ascends an impossible staircase towards a leather-clad god. No other genre conjures the feeling of an impassioned monologue in a darkened theater the way that epic doom does, and Candlemass nailed the atmosphere on the first try.

What separates Candlemass from their non-epic brethren? What gives Candlemassi their grandiosity? In short, unparalleled focus and reverence towards the dramatic. Tempos, tones, song structures, and everything else stay relatively consistent throughout Epicus Doomicus Metallicus. There are no intro tracks and no exploratory moments. The drive to create the most dramatic sounds possible stands alone. It’s right there in the name: Epicus Doomicus Metallicus. This name needed to sound vaguely latin-y to invoke humanity’s ancient stories, but it couldn’t be too illegible to the average long-bearded record store employee or  the effect of the core words would be lost. It doesn’t matter that the result is kind of goofy- when said with a straight face, the name conveys the proper effect. Regardless of how silly or stupid it could have been, it just works.

That sums up Epicus Doomicus Metallicus, really. It just works. I didn’t bother to go into the downsides for this record because nobody cares when it comes to Candlemass. They made a striking enough debut to launch a subgenre and stay on top of it for decades. The furrowed brows and emotion-infused riffs juxtaposed with the absurd ideas would have shattered the record into pieces if Candlemass didn’t fill every second with as much emotion as possible. But they did, and the horizons of metal changed.