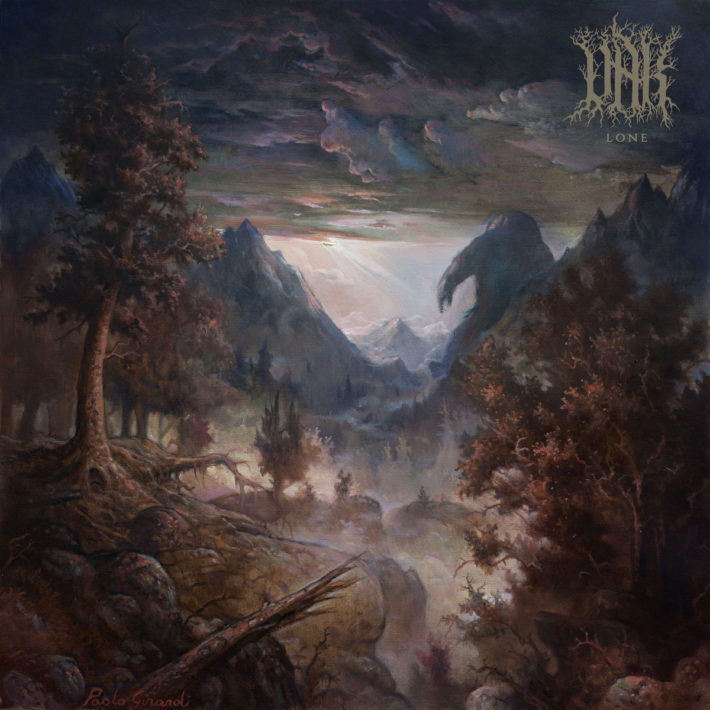 When I was looking through the release calendar and came across Oak, a band founded by members of Gaerea, I knew it had to be a good record. Based in Portugal, Gaerea released their debut full-length only last year and it was one hell of a release in the black metal scene. This year, two of Gaerea’s members have laid their focus on a funeral doom/death metal sound and created Lone, a solid record that’s heavy as hell, and takes you away to barren lands.

Something that really stood out to me on the record was the well-composed structure of the album. There’s quite a variety in sounds throughout the record, but it’s composed in such a way that you don’t really notice the transitions. There’s also moments when the transitions are really obvious, but this is for example when the built-up tension suddenly gets released, or when a really rich and layered sound gets followed up with a relatively shrill one, to emphasize on the bitterness that Oak wants to express on their debut album. The first two songs of the record are over fifteen minutes (the second one nearly twenty), and follow each other up perfectly, making it function as one 35-minute song. Even so, they don’t really feel that long, for when you put them on, the minimalist guitar melody, together with the well-timed drums take you away to a place where time doesn’t exist. The drummer alternates between filling the void in between the guitar notes with fills to build up tension, and timing the drum beats parallel with the guitar melody so as to increase the impact of each individual note. The album also contains atmospheric soundscapes that accompany the music. For instance, about halfway through Mirror, the guitar melody gets enriched by an ambient synth-like sound, only to make the music feel much colder and barren after it disappears. With multiple layers of vocals, the duo makes sure the heaviest passages really have an impact on whoever is listening to the music.

The last two songs are different than the first two, in the sense that they are significantly shorter than the first two, and they are faster. Even so, it doesn’t feel like they don’t belong on the album, it’s more like the first two songs build up to the finale that’s made up of the last two songs. In the heaviest passages, there’s extra dissonance in the guitar, as well as double vocals. The drummer also proves that he can play really fast, as opposed to the other passages in which there’s a slower drum beat which functions more as an accompaniment for the guitar.

In short, Lone is a versatile, but solid funeral doom record, created by two people who already proved their talent with Gaerea, and who have now demonstrated that they aren’t just skilled in creating black metal, but also that they can venture into other extreme metal genres. The structure of the record is really well composed, both within each song (the first two could also have been released as a separate EP), as well as throughout the record. The album’s atmospheric passages invite you into a whole new dimension, and the heavier parts leave an impact that you won’t soon forget. Highly recommended for whoever enjoyed Bell Witch’s 2017 Mirror Reaper, but also likes a more death metal sound.