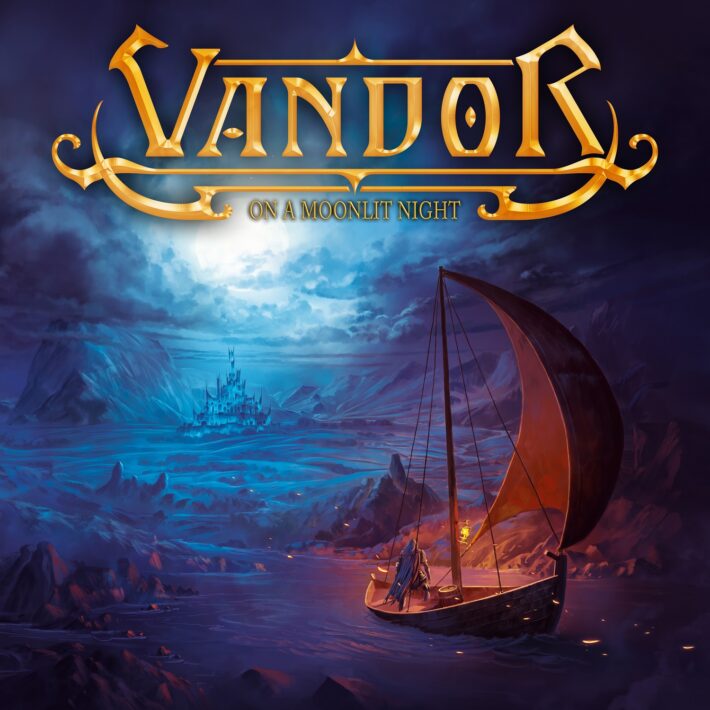 Vandor hail from Gothenburg, and On A Moonlit Night is their first release on Scarlet Records and their second overall. On A Moonlit Night follows 2019’s very good In The Land Of Vandor. They play in the style of Helloween, Sonata Arctica, and similar euro-power metal bands who write expansive records that have even odds of featuring a dragon as a main character and a map in the album notes. As with most sophomore releases, I felt optimistic that they would take a step forward from their already good debut. However, not everything can improve constantly.

Similar to other euro power metal bands, the focus here is on the high-flying choruses. Vandor nail these. The riffs don’t always hit as hard as it feels they need to, but the high-pitched exultations of Vide Bjerde make up the difference. It’s easy for bands like this to get lost in the fog and forget the burst of sunlight that needs to be at the center of the release. The path sometimes winds towards dangerous territory, but Vandor always manage to find their sun. On A Moonlit Night creates its share of fistpumping moments.

Some tracks build towards satisfying conclusions, and when they do it feels oh so good. Songs such as “River Of Life” and “The Sword To End All Wars” take those great choruses and add small moments of breath that make the climax explode just a little more. These moments turned out to be risky, as Vandor fails as often as they succeed with them. But when they succeed, they make Vandor sound as accomplished as any euro power metal band.

When they fail, oof. Now is as good a time as any to bring up “The Sword To End All Wars,” the eighteen minute epic that could only ever cause this album to vault into the stratosphere or stay locked against the damp earth given its size and position on the record. Plenty about this track sounds promising. The ending satisfies, which doesn’t come easily to a track this hefty. But too much of this song meanders or doesn’t need to exist. “The Sword To End All Wars” reminds me of Alkaloid’s “Rise Of The Cephalopods.” Not in musical style, as Vandor don’t play anything close to technical death metal, but in that they are both gigantic culminations of everything that came before on their band’s sophomore release, and they both sound merely fine. I won’t turn down a chance to listen to either if I have the time, but neither present anything special to me. They’re regular tracks, just large ones that take up three or four times as long as all the others to accomplish almost the same thing.

Bad use of space surfaces all throughout On A Moonlit Night. The thirty second intro track does nothing. Those same moments peppered throughout the release that lead to the most triumphant cumlinations just as often lead to Vandor tripping over themselves. On A Moonlit Night doesn’t get the glorious spiritual strikes as often as it deserves to as a result. I spent half of the record waiting for the enjoyable moments, and left every listen urging myself to like this more than I actually did.

The problem with playing something in the style of Helloween is that Helloween just did that recently. Euro power metal has some heavy hitters still releasing top-tier music, and Vandor hasn’t done enough to stand beside them on On A Moonlit Night. Still, this is quality euro power metal. All of those problems don’t matter if you can’t stop rocking out to the big hits that Vandor gives. I recommend On A Moonlit Night to anyone looking for more power metal in this style. There’s enough to like that it’s worth your time.