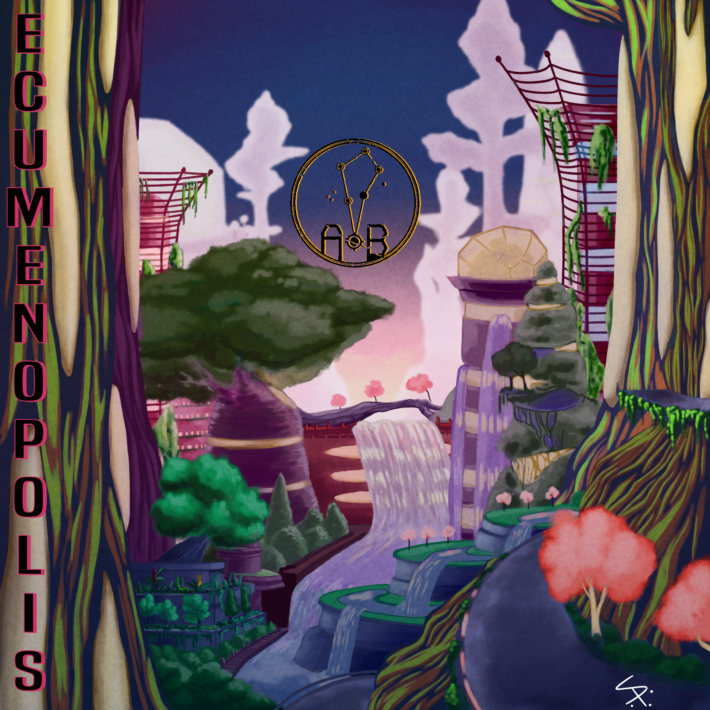 Space-disco metal adventures Alpha Boötis are a Montreal-based band, whose music is the meeting point between exciting classic heavy/prog metal and lustrous synthwave influences. In preparation to the release of their new album, I had a chat with the guys.

Hello, this is Rick! – who am I talking to, and what instrument(s) do you play?

“Sounds from the past; stories of the future” is the slogan found on your website, and it recaps your music well: sci-fi stories about a distant future sung through retro sounds, reminiscent of a time when everything sounded new and exciting. This is an interesting choice, why did you choose “past” sounds to talk about the future, instead of modern, maybe avant-garde music? Do you think our collective excitement about the future has vanished, and it’s only a thing of the past?

The choice to use “sounds of the past” wasn’t really a conscious one. We started as a synthwave duo, inspired by Carpenter Brut, Dynatron, Lazerhawk, Perturbator and Dance With The Dead, and as such, nostalgia and the 80s/video game music sound palette was a given. I also grew up listening to the classic franchises of the past, either directly, or through reboots, remakes and spin-offs, and it’s only recently that I’ve started watching and reading new original science-fiction. Science-fiction music was somewhat stuck in the past for a while; Fallout, Mass Effect, Blade Runner 2049, Bioshock… all the big sci-fi franchises love had music that mirrored the codes established by Jean-Michel Jarre, Tangerine Dream, Giorgio Moroder and Vangelis in the 80s. That’s probably why Alpha Boötis went the retro route, as far as sound design goes. Although, as I’ll touch on in the next question, we do want to explore some more cutting edge sounds at some point.

Thematically, I think there’s a deep need among my generation for an exciting and hopeful project for the future. I think we’re starting to see such hope around the transition away from fossil fuels and the building of a sustainable lifestyle, but we have so little power that it feels all we can do is tend our own garden.

For late 90s kids like us, there was always a disconnect between the hopeful encouragement of our parents and teachers (You can be anything you want when you grow up) and the constant stream of terrible news coming from all around the world… Let’s just say that for us, the future feels more like Mad Max and less like the post-scarcity paradise of Star Trek. Boundless optimism and excitement has been replaced by anxiety towards the coming environmental collapse and anger against the carelessness of our forebears for allowing it to get so grim. That’s not to say we’re all doom and gloom, but it felt wrong to tell a science-fiction story without addressing these looming issues. Just as it is to talk about Canadian or American history without addressing slavery, racism and the genocide of indigenous nations.

I could go on and on about this question. This is a topic I think about almost everyday, especially when I write music and stories.

“Ecumenopolis” is a new version of the eponymous song from 2017, this time with sharp metal influences that were absent in the original version. The same can be said for the new version of “Jump To Alpha Boötis”. Do you think this is a new beginning for the band, sound-wise? Do you plan on adding more metal influences in the future, alongside your classic synthwave sound?

I wouldn’t call it a new beginning, but  a steady evolution. There’s always been a metal influence to our songwriting, which was less overt on the first EP since the production was purely synthwave. The transition started when we arranged these songs for live shows. That’s when we added electric guitar, bass and drums, and that highlighted the heavy metal heritage of these songs. We’re all metalheads in the group, and since there’s a big overlap between the synthwave and metal scenes, our fans tend to be as well. On our first full length album, “Space Vikings & Other Stories”, we kept that fusion going and pushed it a bit further, recording some guitars and adding vocals inspired by Queensrÿche and Iron Maiden. Seeing our fan’s reception to that album, and how much fun we had making it, we’re pretty confident about making the synthwave/disco and metal part ever more developed in the future, which gives us a higher level of contrast to play with.

The heavy guitars and drums are definitely there to stay; our 2022 album is already written, and it features our heaviest riffs, our funkiest disco grooves and our most danceable electronic music.

So, you guys are about to release a new album, “Science Fiction Double Feature” (love the title!), featuring both new tracks and re-recorded ones, is that correct? What more can you tell me about the album? Why did you decide to re-record old songs?

Correct! The decision to re-record our early songs was made to work around the constraints of the pandemic. All our plans for 2020 had been cancelled, and we weren’t able to meet and rehearse as a band for months on end. I did not want us to go silent, but I also didn’t feel I could do a proper job recording our next album remotely, without rehearsing the songs and working on them in person.

That’s when we had the idea to re-record the songs from our first year as a band. The version of these songs we played live was almost entirely different from the recording and we had rehearsed these songs plenty of times between 2017 and 2019, so working remotely would be less of an issue. I also jumped on the occasion to improve the sound design and production, since I had only 18 months of experience in electronic music production when I released Episode 1.

These re-recordings will be available digitally this August, on an album called “Jump to Alpha Boötis”. It will also include a synthwave cover of Gojira’s “Another World”.

“Science Fiction Double Feature” will be a CD only release, which will include “Jump to Alpha Boötis” and our previous “Stowaway Ants” EP, making it a true double-feature! We borrowed the title from The Rocky Horror Picture Show’s intro song, a synthwave/power-metal cover of which will be included on the album.

On your website, a thrilling story accompanies the songs “Jump To Alpha Boötis” and “Ecumenopolis”; did you write the story or the music first? And did the songs have a story already back in 2017? Additionally, what were your inspirations (movies, books, tv shows etc.) for it?

In this case, we wrote the music long before the story. The 2017 release was paired with a very short narrative that was thrown together quickly. This time, since we were already working to elaborate more on the stories for the next album (more on that later), we spent more time thinking about the stories, which we structured as short adverts for a fictional scifi tv-show. We took inspiration from Clone Wars’ and Cowboy Bebop’s “in the next episode” segments for the tone, and from Isaac Asimov’s Foundation, the Mass Effect Trilogy and Star Trek for the content of the stories.

Some time ago I spoke with a band who was releasing a book to go alongside its album, and I thought that it was an interesting idea, as far as concept albums go. Do you think Alpha Boötis might do a similar thing in the future? Or will it be found on CD booklets and your website only?

I love the idea of having a book accompany an album so much that we’re already working on one! We teamed up with two friends of ours – one’s a screenwriter, the other a graphic novel writer – to expand the story of our 2022 album into a series of narrative podcasts and short stories. Those will be available online first, and then eventually printed in an anthology. We are also thinking about ways of combining our passion for table-top roleplaying games and our stories and music into a project, but so far, I’ve lacked the time to properly work on that. Maybe once this album cycle is over I can get to work on that!

Before starting this project, did you have any previous experience in playing in a band, and/or writing music? What about the other components? For a band with such a particular sound, what kind of musical background do you look for?

I started writing music the day I picked up a guitar at age 12. My father bought me Guitar Pro 5, and I quickly had written dozens of meandering and clunky progressive rock/metal songs I could barely play. Throughout my teens, I tried to get a band off the ground with AB’s singer/keyboardist Harakoa… without ever managing to form a stable lineup, to record or release anything in seven years!

Aside from private guitar lessons for a few years, I learned mostly by reading books, emulating the songwriting of my favourite artists and watching thousands of Youtube videos. I also took part in McGill’s Garage Band Camp (where I met AB’s drummer Jotunbot) and two musical theater productions in college.

As I said before, we assembled our live band really quickly before our first show, and that meant we picked former bandmates we could rely on. Later on, when picking our new members Votson (bass) and Krøgorlön (saxophone), I tried to find people who had similar goals and expectations as the rest of the band, had interest in playing a wide variety of musical genres and were as nerdy as the rest of the band.

Many thanks to Ozymandias and all the guys in Alpha Boötis for their time! Be sure to check out their music on Bandcamp; you can also follow the band on Facebook, Instagram and Twitter.