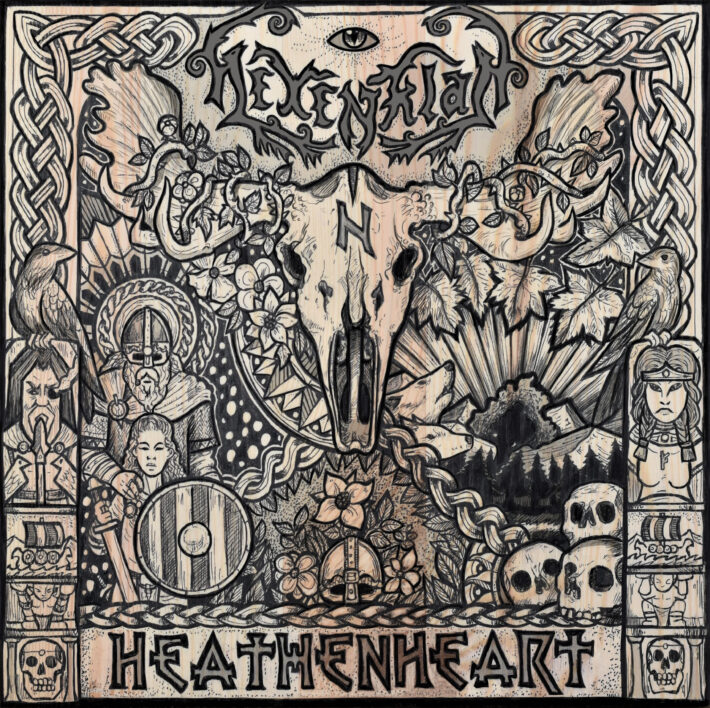 Heathenheart. Hmm. Wonder what they’re referencing with that one. Hexenklad play a style of folk/black metal that reminds me the most of Moonsorrow or Horn. They feature some of the exploratory musings of older folk metal bands, but they mostly lean on melodic lines that sound like they come from deep in a forest that has lost all of its leaves to autumn but has not yet been blanketed with snow. Armed with songwriting prowess, an expansive sound, and no NSBM connections that I could find with a quick google search, Hexenklad have set forth on an exciting path.

From the opening riff, Hexenklad prove they know how to write a good melody. Throughout Heathenheart, earworming waves of music give life to songs and a reason to move forward. The first half of this release sounds excellent because of these melodies. Tracks last longer than I feel they should be able to get away with. However, the mutating and satisfying melodic lines keep me invested for a surprising amount of time. At least on the opening half of Heathenheart. The solos sparkle as well. The title track showcases this: The guitar solo gives the notes space, while maintaining the high energy of the rest of the track.

These great moments wouldn’t work if they weren’t heartfelt. Hexenklad take simple passages and do great things with them in the first half of Heathenheart. Relatively simple drum beats become the marching, pulsing heart of a track. The melodies change quickly enough to not grow stale, but none of them contain real surprises. Instead, Hexenklad lay all of their cards out on the table, let out a charged howl, and dare the listener to not dance along.

For the first seven tracks, Heathenheart flows beautifully. And then the clock strikes eight and Hexenklad turn into pumpkins. Heart-racing melodic lines get replaced by wandering instrumental passages. Resonating vocal howls turn into soft spoken word passages that could pass as meditation guides. Changing and shifting tracks become overly monotonous. As bizarre as this stylistic shift feels, equally bizarre is the lightning speed at which it happens. There is no gradual decline. One moment, Hexenklad sound like one of the next big folk metal bands, and the next moment I have trouble making it through a track.

Part of this metamorphosis must be the length. Heathenheart lasts for a backbreaking hour, and when a full half of the record sounds as rough as the back half of Heathenheart does, the record sounds a lot longer than it is. If Hexenklad had just released the first seven tracks, this would have been a thirty-two minute release. Maybe not the longest, but you could definitely call that a full album with a straight face and a pure heart. If you’re concerned, add in “Olde Gods Awaken,” bring this up to over thirty-eight minutes, and I would still love this record. As it is, the biggest upside to the final twenty minutes of Heathenheart is that it’s fairly easy to ignore as background music. All of the energy that Hexenklad had built over half an hour dissipates in an instant and never comes back. Some tracks, like “Olde Gods Awaken,” have good moments, but still tread water for for too long.

Maybe Moonsorrow have ruined my and my standards are unreasonably high. If that’s the case, check out Heathenheart. Hexenklad have written some fantastic songs here, and it would be a shame to see them buried beneath the forest duff. Faults and all, I very much enjoyed listening to Heathenheart. Though I’ll avoid the whole record, some of these tracks will be with me for a long, long time.