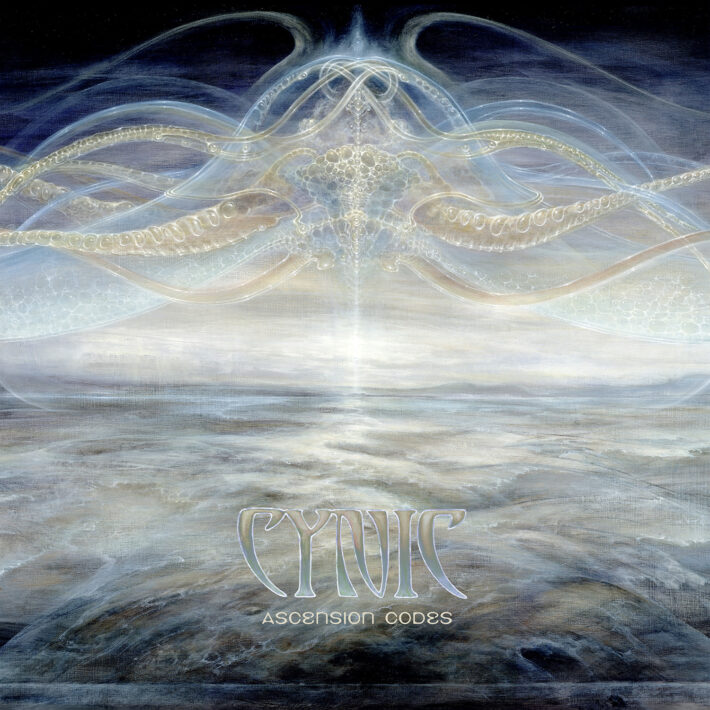 Cynic are one of those legendary bands that earned the right to do whatever they want, and then proceeded to do exactly that. Their 1993 record Focus remains one of the top death metal experiences you can find. However, they followed it up with nothing but internal strife and side projects, and by the time the band returned fifteen years later for Traced In Air their sound had morphed into a more jazzy, more electronic, more progressive style that had very little to do with metal anymore. They still were and still are excellent. Just in a very different way than what could have been. The band has returned through heartbreak for their fourth studio album and first since 2014, Ascension Codes.

The production on Ascension Codes makes my jaw drop. I adore how this record sounds. Every moment gives beautiful clarity, the quiet moments whisper with crystalline focus, and the loud moments triumphantly burst from whatever speakers or headphones you’re using. I’ve listened to this through great headphones and through a cell phone sitting in a cup. Even that can’t keep the beauty of this record from shining. As important as production can be, I can sometimes lose the effects or attribute the successes and failures of a record elsewhere. Ascension Codes sounds as warm and alive as any record released this year.

Every performance outside of the vocals is excellent. Dave MacKay (Bass-synthesizer and keyboards) and Matt Lynch (Drumscapes) were never going to step out of the awful circumstances that have surrounded Cynic for the past two years to make this album their own, but both perform as well as could be expected. The drumming gives Ascension Codes depth and dances in its own spotlight rather than simply providing a base for the more flashy instruments, and the baselines creep beneath Paul Masvidal’s guitars with enough spark to deserve the production job they were given. Masvidal, of course, is one of the world’s great guitarists. His work here is as unsurprising as it is impressive. Even the vocals were sufficiently satisfying if you’re a fan of Cynic’s vocoder style.

The songwriting also lives up to Cynic’s high standards. While the band has left death metal long behind in favor of progressive rock, they still maintain a straight line from Focus to now. They have a supernatural ability to write memorable and enjoyable melodies at will. Ascension Codes is peppered with heartwarming moments, such as when the melody from “The Winged Ones” returns in “DNA Activation Template.” I can’t help but smile when listening to Ascension Codes. At least at first.

There is a little too much bloat on Ascension Codes. Every second or third track is an ambient interlude. While they all sound excellent and I didn’t hate them, these interludes just felt like Ascension Codes repeatedly taking a break to reset the album. I question if they’re all really necessary.

Those interludes play into a larger issue I have with Ascension Codes, which is the length. Cynic won’t crash through the floor with the weight of a forty-nine minute album, but every time I listened to Ascension Codes I felt done well before the album finally left me. The last few tracks sounded as good as the rest of the record. Still, I would have had a much better time with this album if it was a shorter experience.

And then there are the circumstances surrounding this record. For anyone who doesn’t know, the past few years have been full of sorrow for this band. Longtime drummer Sean Reinert, who left the band in 2015, passed away last year. Longtime bassist Sean Malone then committed suicide. I don’t know what Masvidal’s intentions were with this record, but I can’t listen to this as just another record from another band. Even though the songs themselves aren’t full of grief, listening to Ascension Codes is unfortunately a unique and bittersweet experience. There’s nothing else to say about this other than that I hope that those who knew Malone and Reinert are doing ok.

Cynic are apparently incapable of making a bad record. Ascension Codes continues the band’s track record of excellence, regardless of genre, strife, or tragedy. Death metal fans who have been living under a rock for the past for the past twenty years may be disappointed by the band’s lighter and less unique musical approach, but anyone who liked Kindly Bent To Free Us should have a good time with Ascension Codes as well.