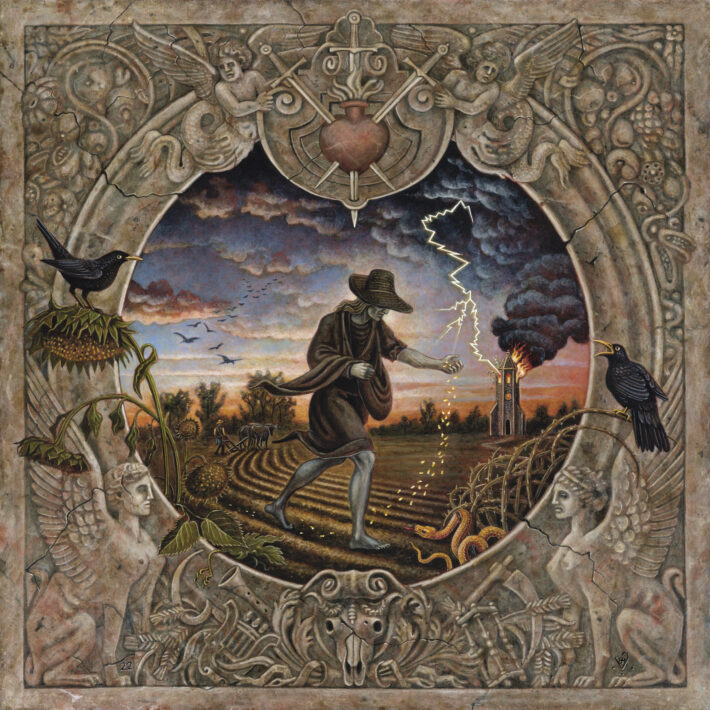 Forlesen are a San-Francisco-based metal band that dabble in drone, epic doom, black metal, and dark ambient sounds. Their debut record, Hierophant Violent, was released in 2020 and remains one of the best drone records I’ve heard from the past few years. They now return with their second release, Black Terrain. Here, the band proves their ambition and desire to explore music to its extents.

If you didn’t listen to Hierophant Violent, you should. But also, that record remained very focused throughout its runtime. Each half felt like a single moment that was stretched out over eighteen minutes. Black Terrain takes a different approach. While the long, slow-explosion nature of the music remains, this album feels more like individual songs with motion and direction than the band’s debut did. For fans of Forlesen’s first record, Black Terrain still leaves you plenty of time to reconsider every life choice you’ve made. For newcomers, this record represents a somewhat easier experience, along with an expanded sound.

Part of Forlesen’s new sound is a larger emphasis on the black metal sides of their identity, specifically on “Harrowed Earth.” An entire passage of Black Terrain is black metal played nearly straight, something that would have been unthinkable on their previous album. Forlesen show off their excellent songwriting ability in these passages, as they sound just as thoughtful and intentional as all of the drone/doom passages. These black metal moments never stick around too long, and can end up sounding like a ghost howling in the back of the recording.

Throughout the chanting, the blackened howls, and the introspective doom metal crooning, Black Terrain remains constantly present. Although this record isn’t as cohesive as Black Terrain, every note is glued to the notes before and after. Forlesen never move quickly, but they also never stop moving. The band’s smooth transitions to and from disparate genres sound natural, as if any band should be able to seamlessly shift between any approach they want over a twenty minute epic.

Black Terrain absolutely succeeds on its ambition, and yet I found myself dreading my opportunities to listen to this record. Unlike on Hierophant Violent, there were too many moments that sounded aimless. Forlesen have managed to camouflage their path forward so well that it disappears at times. When the heavens open up and the song progression starts to pour out it absolutely makes up for Black Terrain’s issues, but there were large swaths of the record where I felt nothing but impatient. The album’s nearly sixty minute runtime doesn’t help either. Black Terrain contains waves of sound that wash over the listener one after another, rather than Hierophant Violent’s more successful and singular structure.

When I was in the mood for Black Terrain there wasn’t any other record I’d rather listen to. Yes, the record is long enough that I’d shift into and out of that move within a single listen, but still. My biggest issue with this record, why I wasn’t able to listen to this carefully constructed, emotional, powerful record featuring heavenly performances more, is that this record absolutely needs to be met on its own terms, and I simply wasn’t able to do that often enough. Sometimes this record contains the best music released this year, and sometimes it’s unlistenable. While there’s nothing wrong with creating a record like that, I as the listener got half of the experience that I would have gotten from a more accepting record. I wanted to love Black Terrain more than I did, but I can’t ignore how often I put on any other record when I felt I should be listening to this.

Forlesen have uncompromised vision, dangerous ambition, and the talent to do anything they want. When the band’s passion lines up more with my listening desires, they could easily create one of my favorite records. If you liked Hierophant Violent or felt that there wasn’t enough on that record, Black Terrain is for you. Even if you haven’t heard of this band before but want a pseudo-religious experience in your metal, Forlesen is for you. On the other hand, if you have trouble concentrating or are looking for gym music, maybe try something else.